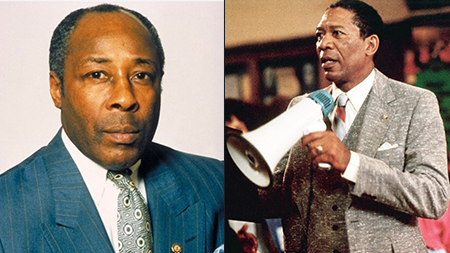 
Joe Clark Dead: High School Principal Who Inspired ‘Lean On Me’ Was 82 – Deadline

You will be redirected back to your article in seconds

Joe Clark, the inspiration for John G. Avildsen’s 1989 film Lean On Me has died.

Clark’s family shared in a statement that the retired New Jersey high school principal died on Tuesday in his Gainesville, Florida home after a long battle with illness. He was 82.

Born in Rochelle, Georgia in 1938, Clark is most known as the ambitious principal of New Jersey’s Eastside High School who expelled nearly 300 students for drug possession, vandalism and fighting, and challenged the remaining students to strive for better. To help him inspire his students and get his inspirational messages across, Clark carried a bullhorn and baseball bat through the Eastside hallways.

Gaining fame for his success at Eastside, the former U.S. Army Reserve Sergeant and Drill Instructor went on to grace the cover of Time Magazine and made appearances on 60 Minutes and The Arsenio Hall Show. In 1989, Clark retired from Eastside and Morgan Freeman memorialized the notable education figure as he starred in John G. Avildsen’s Lean On Me, written by Michael Schiffer.

Like the real-life Eastside principal, Freeman accessorized his principal’s suit with a bullhorn, baseball bat and a tough-love attitude. Freeman went on to win an NAACP Image Award for his performance as the ambitious and inspirational New Jersey principal.

Nearly 30 years after he left the academic world, Clark continued to inspire future iterations of his tale as John Legend, Wendy Calhoun and LeBron James were set to adapt Avildsen’s film for a drama series at the CW.

Clark is predeceased by his wife, Gloria and survived by his children Joetta, Hazel and JJ. He is also survived by grandchildren, Talitha, Jorell and Hazel.