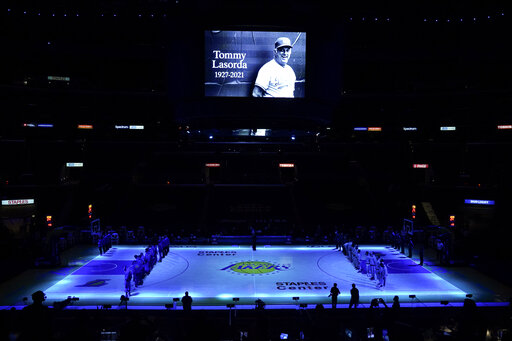 The Los Angeles Lakers honored one of the city’s greats tonight, hosting a brief tribute before the team’s National Basketball Association game against the Chicago Bulls at Staples Center.

A screen projected a photo of the late Tommy Lasorda in his Dodgers uniform, and quickly gave some highlights of his career. which included championships with the Dodgers and an Olympic gold medal as the manager of the US baseball team. Lasorda died today at 93.

The announcer then asked for a moment of silence for the players and personnel in the darkened arena to honor the former Dodgers manager, who passed away today at age 93. Owing to the coronavirus pandemic, which has made Los Angeles the most infected city in the country, there were no fans in attendance.

Elsewhere, the Los Angeles City Hall was lit up in Dodger Blue tonight to honor Lasorda.

French Actress Judith Chemla Posts Photos Of Injuries Stemming From Domestic Abuse: “I Can’t Stand It Anymore”
Omicron BA.5: One Variant To Rule Them All…For Now
‘It’s like waiting for Christmas’: Backstage with… Steve Carell as Gru and the Minions return
Drake Joins Backstreet Boys to Perform “I Want It That Way” in Toronto: Watch
Andy Jassy just wrapped up a rocky first year after succeeding Bezos as Amazon CEO