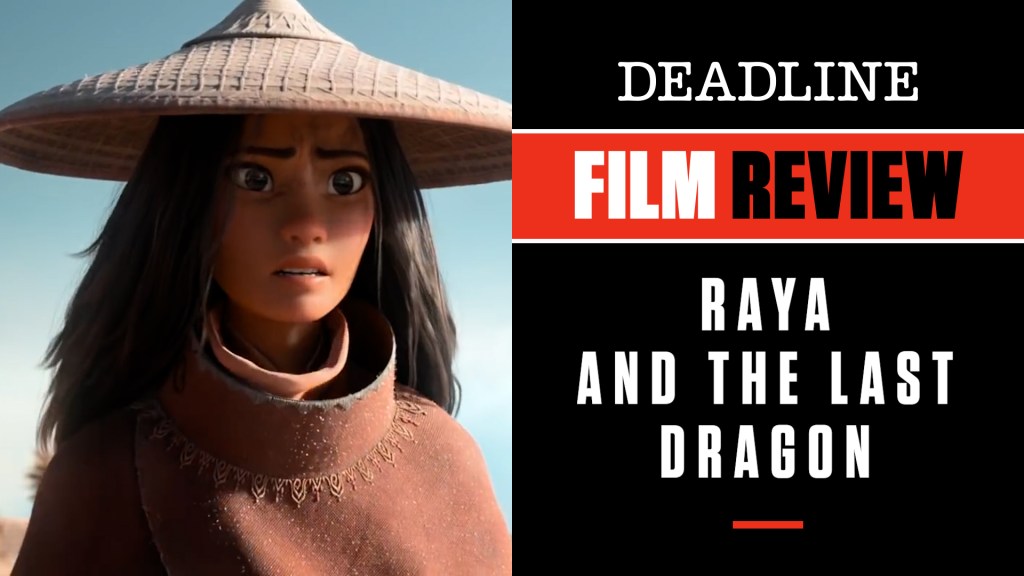 I suppose it’s not fair to compare CGI animated movies about a boy — or girl — and their dragon, but if I must, let me just say this right off the top: I really prefer DreamWorks’ How to Train Your Dragon and both of its sequels to the latest entry from Walt Disney Animation Studios, Raya and the Last Dragon. It had an emotional punch to it this film didn’t quite achieve.

But that’s just me. I know who this was made for, and I am not the chosen one. Young-teen girls will devour it, and that certainly is a good thing because, like many female-empowerment stories, this one has a strong message of hope as all semblance of humanity seems to be falling by the wayside. The plotting just gets a little too jumbled and contrived, full of Disney Princess elements, but careful not to claim entry into that exclusive club. No, Raya is a strong and determined warrior girl hellbent on saving us all and returning the fictional Southeast Asian home of Kumandra back to its rightful place as a paradise on Earth when everyone stands united with a kindly dragon force to boot.

Maybe a more apt comparison here would be with Disney’s live-action Mulan. Both films feature a singular young woman of great strength taking on impossible forces, and both conveniently have fathers who have been put out of commission — thus it is up to daddy’s little girl to save the world instead. In Mulan, that girl has to disguise herself as a man, but not Raya. She is who she is.

The backstory, explained in voice-over narration to open the film, tells us that about 500 years ago, Kumandra was taken over by Drunns — lethal fireballs that turn to stone any human, described as real baddies as a race, that gets in their path. Suddenly the populace is the architecture. The valiant dragons tried to slay them but were extinguished. Now Kumandra is a gloomy place to hang out, but Raya, with the help of the myth-like dragon Sisu — the creature she unearths and magically conjures back to life in the form of a hip but awkward teen girl just like herself — is off to the races to try and put the valuable Dragon Gem back together (it was broken into pieces) for the sake of all humanity.

The five specific tribes of survivors created with the end of the dragons — Heart, Fang, Spine, Talon and Tail — all have needs for it. Raya is in the Heart division, and it was key to keeping the Gem intact. She and Sisu go into action, and in pure Seven Samurai style, start collecting wacky individuals along the way to make up their merry band of warriors. Oh, there also is a cute, Disney-fied creature companion — snaillike and a little armadillo-ish — on whom Raya rides to various different regions. His name is Tuk Tuk, not to be confused with TikTok. It all goes on from there as things get intense, there’s lots of martial arts action thrown in, and dear old Dad now is made of stone and needs to be set free with a long list of others.

Kelly Marie Tran, recently in The Croods: A New Age, handles vocal chores in bringing Raya to life and has the soothing voice to do it. Her nemesis is Namaari (Gemma Chan), a not-so-good friend as it turns out but a pretty squishy villain figure for some of the running time. She has her own plans for the Dragon Gem, and it doesn’t mean sharing them with her onetime friend. The real star power is provided by Awkwafina and her unmistakable delivery as the unearthed Sisu, who looks a lot more like My Little Pony than any dragon you might know. She morphs into a teen-girl version, and they make an engaging pair in the scheme of things.

Refreshingly there really is no romantic interest here, something even Mulan couldn’t avoid, but all this is very modern in its thinking when it comes to female heroines. The gang she collects along the way are kinda cool, including Boun (Izaac Wang), Noi (Thalia Tran) and the giant Tong (Benedict Wong). Raya’s father, Benja, is voiced by Daniel Dae Kim. Don Hall (Big Hero 6) directed along with Blindspotting director Carlos Lopez Estrada. Qui Nguyen and Adele Lim wrote the script.

Disney clearly is walking the walk when it comes to diversity in front of and behind the camera here, and the studio should be applauded. Raya rocks visually as well, but after seeing the 2D Tom & Jerry last week, it reminded me that I am a bigger fan of pure 2D animation. Still, no one breaks out in song at a moment’s notice, and the characters are true to themselves. There’s a very satisfying ending to it all as well. Check out my video review with scenes from the movie at the link above.

To tell you the truth, there is a very cool short that I really liked better than the main attraction. Us Again is about an older Black couple, clearly one-time dancing aficionados for whom age is now taking a toll. But when it rains, they head to the pier and dance the night away — age being just a number. It really is lovely and will play in front of the film during its theatrical run and hit Disney+ in June.

Do you plan to see Raya and the Last Dragon? Let us know what you think.v