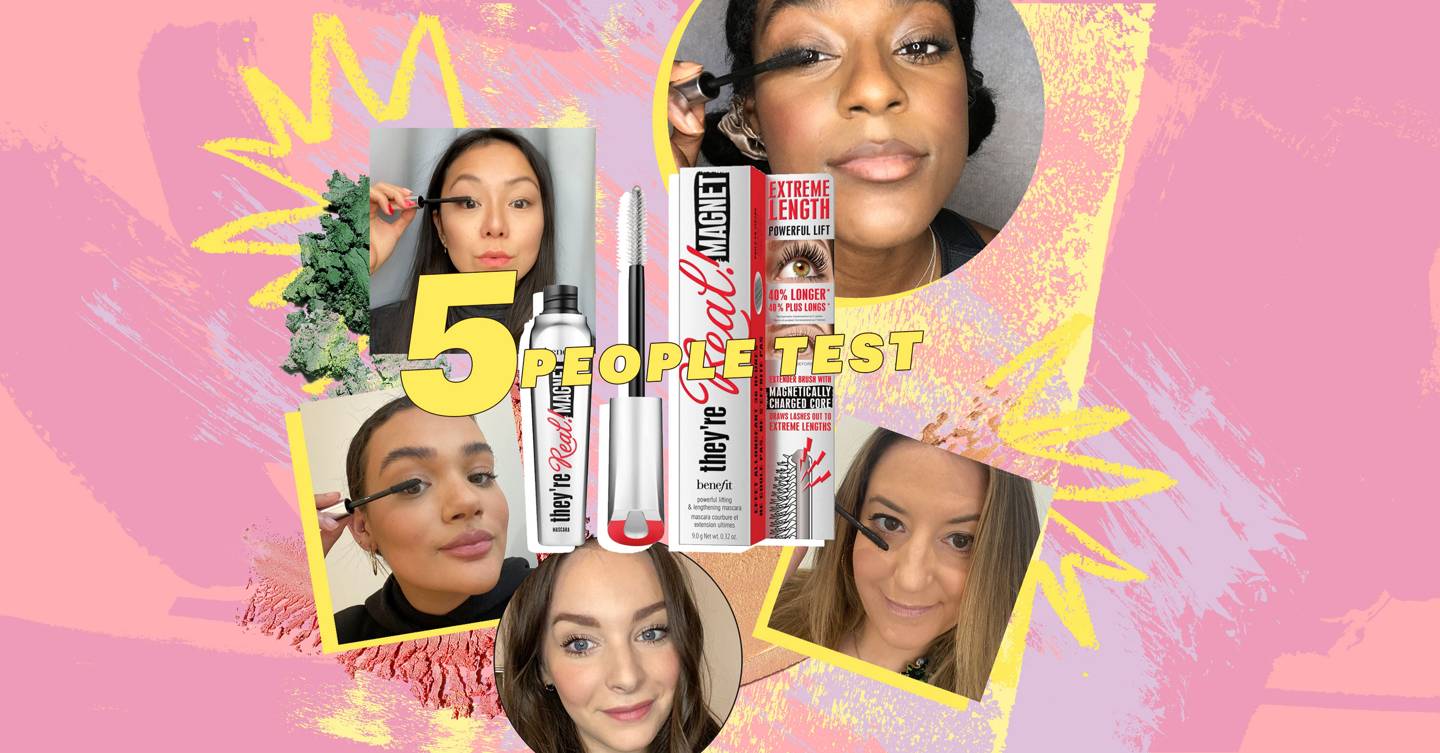 If you are makeup obsessed like most of us here at GLAMOUR HQ, you will be very familiar with Benefit Cosmetics. The San Francisco-born brand that made a name for itself in the brow game, and also through that world-renowned Hoola Matte Bronzer and the uber popular Benetints and who can forget their mascara. From the ‘BadGal Bang’ to the ‘Roller Lash’ and of course the ‘They’re Real!’ collection, including those adorable pocket-friendly minis, Benefit have not fallen short from making their mascaras, makeup bag essentials.

However, it seems like their collection just keeps growing. Benefit have added a new baby to their repertoire. Welcome They’re Real Magnet Extreme Lengthening Mascara, which is like the original lengthening mascara, but on steroids.

Our pick of the best mascaras will give you full, fluffed-up lashes

The latest edition is a 36-hour long wear, lengthening mascara and comes with some real high-tech benefits (no pun intended). It will make them look 40% longer for a dreamy straight from Hollywood voluminous flutter. How it works? It’s designed with an extender brush with zigzag bristles and a magnetic-charged core (hence the name). This magnetic core then pulls the magnetic mineral-enriched formula up and out towards the tips of the lashes and beyond which give that extreme length and power lift. The zigzag bristles are strategically positioned to fan out, separate and define every lash for a glamorous, butterfly wing flutter.

I’d argue that I’ve been more loyal to Benefit mascara than boyfriends over the years. I’ve flirted with a few new brands for review purposes but I always return to Benefit Roller Lash for fluttery, defined lashes that last from my morning latte (7am) to lights out (often 5am in the old world) so I was excited to try the brand’s latest iteration. The packaging stays true to the brand’s ethos – fun but not fussy – and I was mega relieved to see a sturdy wand with zigzag wiggles (I can’t stand a delicate wand). It was super easy to apply and after one coat, my lashes were the longest I’ve ever seen them.

Equal parts amazed and greedy, I slicked on another two coats and whilst there was a little bit of excess mascara stuck on the ends of my lashes, I was impressed with the incredible length it gave my lashes. Plus, for someone who often ends up with panda eyes, this stuff does.not.budge. If you love lashes that make people ponder ‘are those false lashes?’, this is the one for you. I don’t think the photo does it the justice it deserves but I can assure you it’s earned itself a spot in my makeup bag (I’m now in a throuple with this guy and Roller Lash).

Benefit mascaras have always stood out from the crowd. In my teens, I remember swearing by BadGal Lash mascara (which has since been discontinued and replaced with BadGal Bang mascara), only to fall head over heels with They’re Real when it launched a few years later. To this day, in fact, I still think it’s the best option if you’re looking for full-on, fluttery lashes.

So when I heard the brand was bringing out another mascara, I knew it was going to be a big makeup moment with some serious innovation behind it. It didn’t disappoint – rather than coating the lashes with formula as a normal mascara would do, this new wand has a magnetic core, which holds on to the formula, pulling it beyond the end of lashes to create an extreme lengthening effect. Plus, unlike some other lengthening mascaras, the lift lasts all day and doesn’t drop. All in all, it’s great news for those with stubby lashes (me).

For full disclosure, I’m a big and bold lash type gyal. In fact, I like my lashes as dramatic as a good Hollywood movie, with a touch of reality of course. However, I hate faffing with falsies, so I spend a lot of time hunting for new mascaras that will give me maximum volume and curl with minimal effort. I’m a fan of Benefit mascaras and my expectations were very high, because if we’re talking ‘They’re Real!’ but better, I know we are about to hit iconic grounds.

Opening the tube I can tell that this wand and I are gonna get on just fine. Not too big that will cause smudging and will be hard to manoeuvre around bottom lashes. However, big enough that will cover a lot more lash in fewer strokes which incidentally will reduce clumping. I mean, the pictures don’t lie, this mascara really bought out the best of my natural lashes. They look so voluminous, and each stroke would make them more curved which added to the dramatic effect. It feels super lightweight and bare, with no flaking after hours of wear. Magnet Extreme… I like you… A LOT!

I wasn’t sure what to expect hearing the words ‘magnet’ and ‘mascara’ together, and the thought of having magnetic fibres near my eyes, admittedly, made me feel a *little* uneasy. However, once my doubts subsided, I was pleased to see a relatively normal-looking mascara wand that isn’t too dissimilar to the original They’re Real wand (no metal shards or scary magnets to be seen, don’t worry). The bristles are quite short and the formula is quite thick compared to other mascaras I use, which meant it took a little work to ensure it didn’t clump too much.

One coat later and I was pretty impressed. If I was going out of the house I would definitely go in with another coat or two, as the mascara definitely focuses on length over volume (thanks to the magnetic fibres which cling to the ends of your lashes as you pull the wand away).By the evening, there was a slight transfer on my eyelids, which I usually expect as my skin can be quite oily. However, the staying power was proved by the removal process, requiring a little more elbow grease and good faith to remove all traces.

They say first impressions count, but with this mascara, I’d say second impressions are when things get exciting. The initial application was a bit ropey, there is definitely a technique to getting the full magnetic experience to extend those lashes. But once that is mastered, HELLO long, luscious & lifted lashes. I naturally have short straight and thin lashes (sad) but wow, does this deliver! I wore it all day and the lift held so despite the slight panda eye I’d 10/10 recommend!