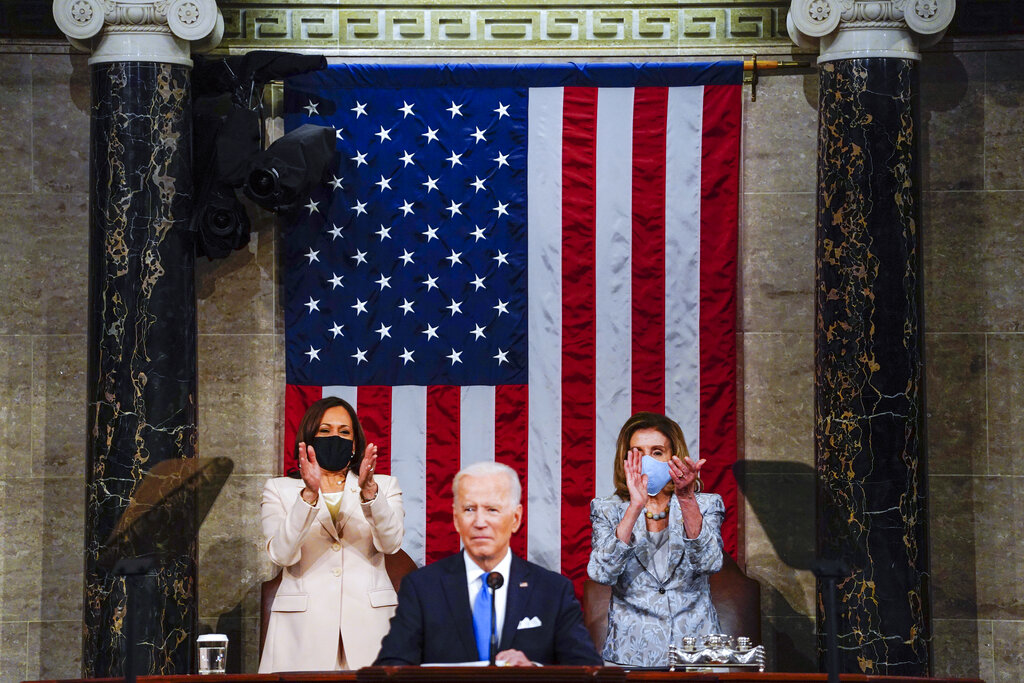 President Joe Biden used the platform of a joint session of Congress to pitch and promote an ambitious agenda that includes massive infrastructure projects and an expansion of healthcare, education and worker benefits, all paid for by an increase in tax rates on corporations and high-income earners.

But the president also seized on his first speech before the House and Senate, restricted in size due to strict Covid-19 protocols, to take a victory lap on the eve of his 100th day in office.

“One hundred days since I took the oath of office, lifted my hand off our family Bible, and inherited a nation in crisis,” Biden said. “We all did. The worst pandemic in a century. The worst economic crisis since the Great Depression. The worst attack on our democracy since the Civil War,” a reference to the Jan. 6 attack on the Capitol.

“Now, after just 100 days, I can report to the nation: America is on the move again.”

The speech also was an historic milestone: For the first time, two women, House Speaker Nancy Pelosi and Vice President Kamala Harris, sat behind a president delivering the speech.

After greeting  Pelosi and Harris as “Madam Speaker” and “Madam Vice President,” Biden said, “No president has ever said those words, and it is about time.”

The impact of Covid-19 was apparent from the crowd in the chamber: A greatly reduced number of members spread out three to eight seats apart, with elected officials seated even in the third-floor area usually reserved for visitors. Lighter applause and cheers replaced what typically are raucous greetings for the commander in chief. Instead of handshakes, Biden gave a fist bump to figures like Chief Justice John Roberts and Sen. Bernie Sanders.” All members and attendees were required to wear masks, although Biden took his off as he spoke.

The scene was far different than the last presidential speech before a joint session, in February, 2020, when Donald Trump used the occasion for a packed chamber to exercise reality show-like stunts, like the awarding of the Presidential Medal of Freedom to Rush Limbaugh.

Biden already has traveled the country to try to sell a $2.3 trillion infrastructure plan, called the American Jobs Plan, that includes spending for traditional projects likes roads and bridges, as well as an upgrade of the electrical grid, improvements to drinking water and wider deployment of high-speed broadband. The plan also includes upgrading affordable housing and schools, and boosting home health care.

It’s still not clear how the plan will move through Congress to secure passage. Republicans have balked at the plan, not just for its size but for its scope, as they have questioned whether the list of items would really qualify as infrastructure.

A group of Republicans is offering an alternative proposal, and Biden said he welcomed alternative ideas.

“But the rest of the world is not waiting for us. I want to be clear: Doing nothing is not an option,” he said.

Biden said the plan was one that will address those who “feel left behind and forgotten in an economy that’s rapidly changing.”

He called for the passage of the Protect the Right to Organize Act, which would strengthen unionization, even though it faces a 60-vote threshold to pass in the Senate.

The White House earlier on Wednesday unveiled another aspect of Biden’s agenda, called the American Families Plan, a $1.8 trillion proposal that includes free universal pre-school for all three- and four-year olds, and two years of free community college, as well as an increase in Pell Grants and increased support for teachers. The plan also includes nationwide paid family and medical leave, providing workers up to $4,000 a month, with a minimum of two-thirds of average weekly wages replaced, and higher for the lowest wage workers. Another proposal would provide low and middle-income families with funding so that they pay no more than 7 percent of their income on high-quality child care.

Biden’s plan also calls for reforming unemployment insurance, with adjustments of benefits depending on economic conditions.

The plan would expand premium benefits of the Affordable Care Act, and extend an increased child tax credit, put in place as part of the administration’s Covid-19 relief bill, through 2025.

To pay for the plan, Biden wants to increase the top tax rate on the wealthiest to 39.6%, reversing part of President Donald Trump’s tax bill, which dropped the top rate to 37%. It would also make changes so that households making more than $1 million pay 39.6% on their capital gains income. It also would eliminate the ability of taxpayers to pass on capital gains to heirs. Biden’s plan also would end the so-called “carried interest loophole,” which allows equity and hedge funds to pay a lower capital gains rate on their income.

The increases in the tax rates would be on top of those unveiled as part of the American Jobs Plan, which calls for increasing the corporate tax rate to 28%, from 21%. Corporations, including Hollywood studios, lobbied heavily for the reduction in 2017.

Biden said, “When you hear someone say that they don’t want to raise taxes on the wealthiest 1% and on corporate America – ask them: whose taxes are you going to raise instead, and whose are you going to cut? Look at the big tax cut in 2017. It was supposed to pay for itself and generate vast economic growth. Instead it added $2 trillion to the deficit. It was a huge windfall for corporate America and those at the very top.”