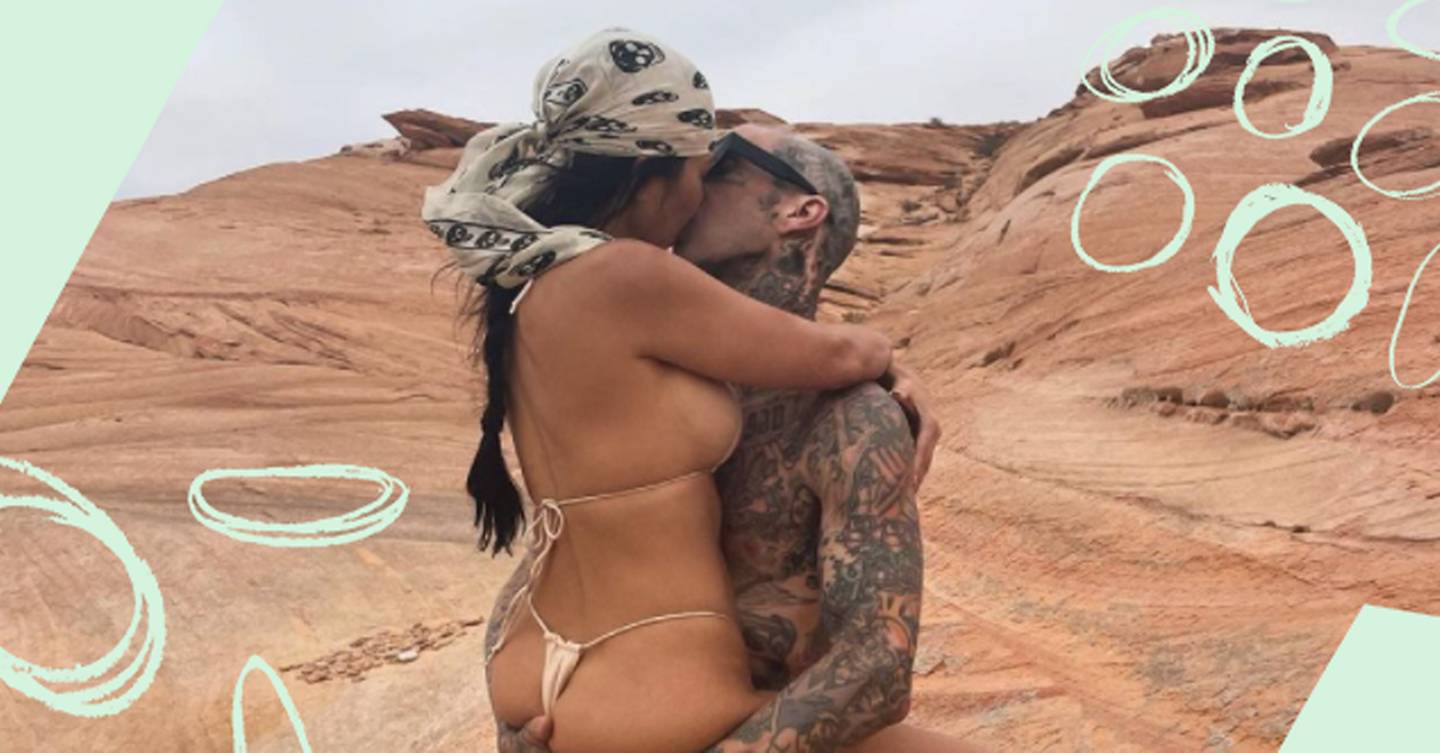 Tapping through my Instagram stories, the same image repeatedly pops up, reposted over and over again by my friends with captions like, “I never repost couple photos but there’s something insanely cool about these two”.

Just so we’re clear, I’m not judging. In fact, I’m equally mesmerised by the image of Kourtney Kardashian straddling Travis Barker in the middle of a desert with nothing but a thong bikini and a very ‘00s Alexander McQueen skull headscarf.

Maybe it’s the passionate kiss, the desert scenery, the intimate arse cupping, or the “Just Like Heaven” caption, but, like everyone else on social media, I too cannot stop thinking about that picture and their relationship.

After being neighbours and close friends for years, reality TV star-turned-mogul, Kourtney, and Blink 182 rocker, Travis, first started teasing their romantic relationship on Instagram earlier this year. They’ve since gone from emoji roses, to finger sucking, leaving the hot and heavy couple weighing heavily on all our minds.

Yes, a fascination with celebrity couples is nothing new, but something about these two really does hit different and if my Whatsapp group conversations are anything to go by, we are all very much here for it.

“There’s something really romantic about what they’re doing, especially after lockdown when people have missed these connections in their own lives,” Miranda Christophers, Sex & Relationship Psychotherapist and sexologist of Jooi tells me when I ask her to break down our obsession.

Which would explain why I can’t stop thinking how I’ve never had that kind of sexually-charged relationship with anyone, since seeing Kourtney’s legs wrapped around Travis’ waist.

kourtney and travis got me back on the apps

“You are getting escapism from your own life,” Christophers says. Confirming that because I, and a lot of you, aren’t getting any right now, Travis and Kourtney are fuelling our voyeurism.

An antidote to our personal longings is one of the reasons driving our interest, but as my friend Poppie pointed out, the fact that you wouldn’t put them together makes them even more fascinating. He’s the drummer with face tattoos, she’s a Kardashian who gets “glam” every day, it’s literally the equivalent of “he was a punk, she did ballet”.

“I grew up with Barbie and Ken, where Ken is literally the male equivalent of Barbie,” Christophers tells me. “It goes against the grain of what we’ve been socialised to believe”.

In the love stories we’ve been told, people like Travis aren’t meant to end up with people like Kourtney. We’ve been programmed to think he’d turn his nose up at her and assume she’d do the same, so the fact they’ve broken these conventional moulds makes them even more appealing.

“By breaking the norm it makes their relationship exciting to us, especially as he looks so different to her ex Scott Disick. It proves you can date anyone that you like, it’s why people are rooting for them to last”.

In fact, it’s a lesson Miranda believes we could all learn. “If you step out of what you know, you might discover something really quite amazing and different. Dating isn’t just about finding who you’re attracted to but finding out who you are as a person.”

The other appealing aspect of their relationship is the fact they were friends first. Maybe I’ve watched 13 Going on 30 one too many times, but deep down, don’t we all want a Matty?

Christophers explains there’s science behind that fantasy, “You might meet somebody and have a physical attraction straight away but further down the line find out you’re not compatible. If you know somebody beforehand you’ve already done that emotional legwork.

“Kourtney knew Travis already; she knew him as a father so there are characteristics there that were probably really attractive to her. Remember, you can always work on the sexual side of things with someone, but fundamentally the emotional connection is what makes or breaks a long-term relationship.”

There’s also something about Travis and his tattoos that gives into that bad boy trope. It’s why we all rooted for Audrina and Justin Bobby for all those years, despite them actually being terrible for one another.

“Being able to tame a bad boy, someone who seems unobtainable, makes things seem more exciting,” Miranda says. However, although we might perceive him to be a bad boy, Barker is in reality a sober vegan who probably has a lot more in common with Kourtney and her organic produce obsession than their outer appearances lead to believe.

Essentially, after almost an entire year deprived of social contact, our Travis and Kourtney obsession makes complete sense, as does making parallels to our own lives based on their relationship.

Maybe they’ve opened your mind to the type of person you would date in the future, maybe, like me, it’s made you realise what’s been previously missing from your relationships and what you want going forward. Or maybe it’s just made you really irritated that this has all happened now that Keeping Up With The Kardashians has wrapped.

Either way, I’m happy to live voraciously through my new favourite couple until at least June 21st.

Kate Moss and Johnny Depp’s relationship history – as supermodel expected to testify
Democrats urge Google to stop collecting location data that could be used to identify people seeking abortions
Love Island To Introduce Inclusion Training As Duty Of Care Upgraded; “The World We Live In Is Changing Every Day,” Says ITV Diversity Boss
Top civil servants asked to draw up plans for job cuts of up to 40% in each government department
Watching Television for Long Hours Can Increase Risk of Coronary Heart Disease, Suggests New Study