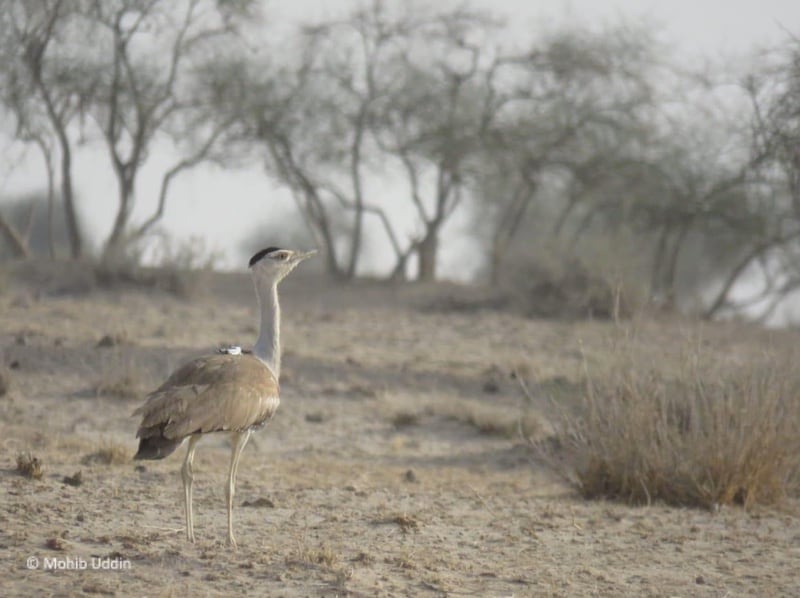 Raheva was only a year old when she died after colliding with a net of power-lines as she was flying through a morning sky from the coastal grasslands of Jakhau towards her natal ground in Naliya, Gujarat. Alfin lived longer, but in melancholy. By the time she matured at the age of three years, her breeding partners had all died. Urged to reproduce, she laid infertile eggs twice and incubated them in vain. Later, on a foraging trip, she choked on a large garden lizard, perhaps rushing to eat it. However, Hope has had a happier life in the Desert National Park of Rajasthan. She has mated and raised her chick successfully as the grasslands around her turned lush green with rains and locusts.

Raheva, Alfin and Hope are females of the glorious Great Indian Bustard; a critically endangered bird that once roamed the vast open plains of India, but is now at the end of its trail. We know intimate details of their life stories thanks to telemetry devices fitted on them by a team of researchers from the Wildlife Institute of India’s Bustard Conservation Program. These devices — marketed as solar-GPRS transmitters — record locations using an in-built GPS unit, and communicate the data through the mobile network.

Additional sensors record temperature and acceleration of the bird. Miniature solar panels power this process, keeping the device alive for years. Transmitters come in many forms: some communicate through satellites or radio receivers; some have a non-rechargeable battery-pack: these are variations to suit the specific study animal, but all serve a common purpose.

Great Indian Bustards, like many other wild species, are wary, reclusive and wide-ranging, making them difficult to track for studies. Transmitters are the only way to follow them in real time, to unearth their secret lives by interweaving individual stories with their surroundings.

Placing transmitters on bustards is no ordinary business. Given the risks involved in fixing a near-permanent object on an endangered animal, authorities are often hesitant on issuing permits for such research. They are also expensive; costs running up to a few lakhs per unit with additional operational charges that requires large funding.

Field biologists spend days following a bird to draw strategies for capturing it. Experienced hands handle it briefly and attach a transmitter on its back using a harness, resembling a tiny school bag. The unit usually weighs up to three percent of the bird’s body mass, so it can fly without a hitch. Soon, the device starts recording locations and relaying the data to an online repository.

This information helps field biologists track and observe the bird using binoculars, to understand where it feeds, rests and nests, what it eats, how it raises offspring and interacts with other birds, and even how it dies. The data is analysed to understand the bird’s movements and how that depends on vegetation, insects, and human-use of land, or the time of day.

These nuggets of information are being used to map suitable habitats, identify and mitigate threats, and collect eggs for captive breeding in a joint initiative to conserve the Great Indian Bustard by the Wildlife Institute of India, Rajasthan Forest Department, Ministry of Environment, Forest and Climate Change and International Fund for Houbara Conservation.

Research teams across the country are tracking other iconic species too, such as the tiger, lion, leopard, wolf, elephant, vultures, cranes, king cobra, python and turtles. Worldwide, telemetry is becoming a valued tool for wildlife research and conservation with large-scale deployments, in turn stimulating rapid development of this technology.

With it, stories of bird migrations are becoming a common knowledge, to inspire us and to remind that a bird with a tiny tag connects us to a far-flung corner of the world.

Sutirtha Dutta is a conservation biologist and scientist at the Wildlife Institute of India. He studies bustards and other wildlife of dry grasslands. The views expressed are personal.

This series is an initiative by the Nature Conservation Foundation (NCF), under their programme ‘Nature Communications’ to encourage nature content in all Indian languages. To know more about birds and nature, Join The Flock.