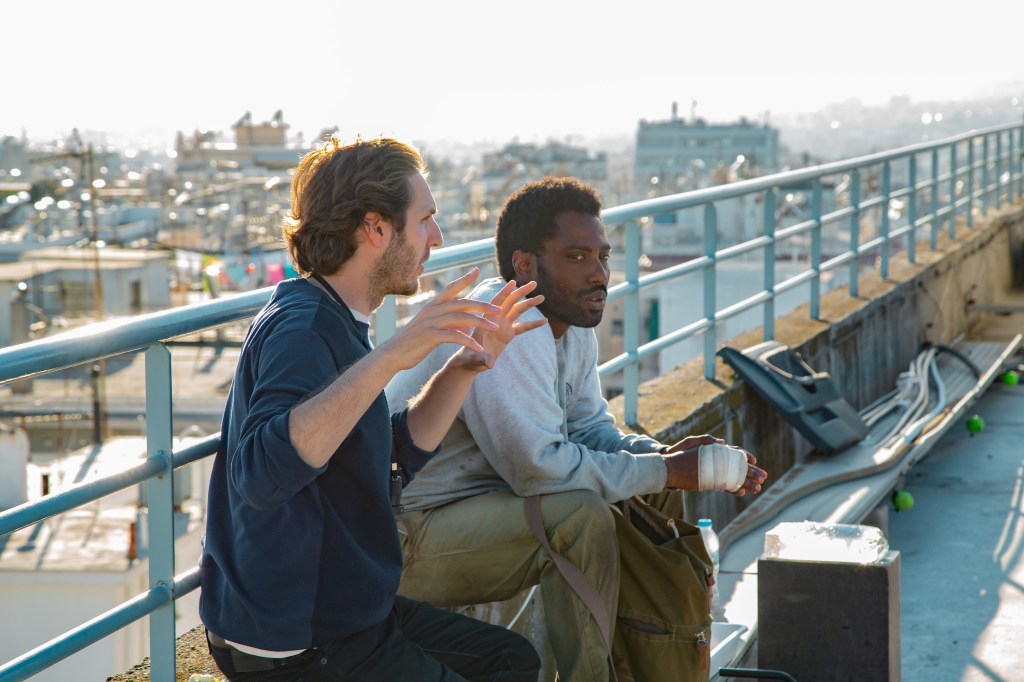 EXCLUSIVE: With their action thriller Beckett set to land on Netflix on August 13, Deadline sat down with star John David Washington and director Ferdinando Cito Filomarino to chat about putting together the story of an American on the run amidst political unrest in Greece.

Washington has had a remarkable 12 months, finding himself at the center of the streaming versus theatrical debate that exploded during the pandemic. Last summer, he was the lead in Tenet, Christopher Nolan’s time-bending action pic that was dubbed as cinema’s savior when it was released as theaters tentatively emerged from the first wave of lockdown closures. Later in the year, he starred opposite Zendaya in Malcolm & Marie, the entirely lockdown-shot feature that released on Netflix in January.

Below, we discuss how those experiences contrasted, and we also dig into his wider career, which saw him play pro football before transitioning into acting. His career on screen has taken off following roles in the series Ballers and Spike Lee’s BlacKkKlansman, and he is rocketing his way to stardom. We also chat about stepping out from the shadow of his father Denzel, and whether he might now be more famous than his dad.

For director Filomarino, Beckett marks his English-language debut following high-profile second unit gigs on pics including Luca Guadagnino’s Call Me By Your Name and Suspiria. He tells us about setting this movie during political and social turmoil in Greece.

Beckett lands on Netflix following a world premiere screening as the opening film of this year’s Locarno Film Festival at the iconic Piazza Grande on August 4.

DEADLINE: Are either of you going to make it to Locarno? There are not many places better in the world to premiere a film than the Piazza Grande.

FILOMARINO: Oh yes, both of us.

DEADLINE: Beckett is a face-paced thriller but it has an indie vibe, even considering its high-profile cast. John David, how did you get involved?

WASHINGTON: I met Ferdinando and Luca [Guadagnino] at the Polo Lounge [in The Beverly Hills Hotel in Los Angeles]. I remember walking away thinking, ‘these guys are wonderful’. They were very elegant and had a swag to them that I appreciated. When I found out about the project [Beckett], and I got to read the script, movies came to mind that I grew up loving – Harrison Ford in U.S. Marshals or The Fugitive, for example. Visualizing this Beckett character in Greece, all the things that happened to him, it sounded like a hell of a challenge.

DEADLINE: Where were you in your career at that point?

WASHINGTON: I think I was about six months deep into BlacKkKlansman press. I’d done maybe two films and a show [Ballers], that was about it.

DEADLINE: Alongside John David, the film also has Alicia Vikander, Boyd Holbrook, Vicky Kripes – how did you get everyone involved?

FILOMARINO: It was a dream, yes. In film you always think about the ideal players for your roles, and I was lucky that these actors responded to the material. This was my ideal cast.

DEADLINE: Where did the idea for the film’s story come from?

FILOMARINO: You have these films from between the two world wars, spy stories, where a single person can change the outcome of war. In the 70s they became about the paranoia of the powers that be. It’s the idea of putting very high stakes on the shoulders of a single person. I loved all these iterations of these types of stories. I liked the idea of doing a take in the context of a political manhunt thriller. I thought it was interesting to focus on a relatable person, who you [the audience] could project yourself onto.

DEADLINE: That’s an interesting point, it would have been super easy to make this the story of a U.S. marine on holiday, someone who had the training to survive this situation.

DEADLINE: John David, how did it compare to working on something like Tenet? I was reminded of the incredible restaurant scene in that movie where you beat up like 20 guys and come out unscathed. In this film you take a constant beating.

WASHINGTON: Being able to draw from my sports background, I’ve had injuries and had to persevere. You find a different strength. The late Kobe Bryant said he would play some of his best games when he was hurt because he had a central focus, he had to block so many things out. Michael Jordan had the ‘Flu Game’, he said that was one of the best of his career, clutch moments, because he had so much focus on doing what he had to do. In the sports world it’s quite common.

Beckett has to push himself. He’s an underachiever but he has so much more to offer. He’s ok with that. When he’s dealing with injuries, he has a central focus on survival. It’s human nature, we can relate to it, when we’re put into a corner… an injured animal is a more dangerous animal.

DEADLINE: You’re in virtually every shot, how demanding was that?

WASHINGTON: When you have a great cast, a lot of the time you don’t have to think about making it work, you listen to the talent you’re surrounded by and react. The other actors were so good I had to be on my A-game the whole time. As a performer, I love that, it’s one of the reasons I love doing what I get to do, seeing what other people bring and how they approach the work. It was the ultimate challenge to keep up with those performances.

DEADLINE: Tell us about setting the movie in the context of these Greek protests.

FILOMARINO: I was particularly inspired by the specific year around 2015 in Greece. It was a special and intense moment, a lot was happening with austerity measures in Europe, it was interesting how the Greek people reacted to that historical moment. Many, for the first time ever, gathered and occupied the streets, shouting out their dissent. I found that very interesting to juxtapose with what was happening to Beckett – a man who lets life happen to himself.

DEADLINE: It’s notable in the film that Beckett is one of the only Black characters, and he’s hunted throughout the movie by a group of white characters, is there a message there?

FILOMARINO: For me, no. He’s an American, I think he would stick out no matter what he looks like.

DEADLINE: When did Netflix first get involved in the project?

FILOMARINO: We were wrapping up production when they picked up the film. We went out on the market and they really liked it. We found a complete understanding in terms of the specificity of what the film was, presenting it not just as a generic genre film, something with a very specific angle. The collaboration has been a very happy one. Right now, amidst this very uneasy climate [of the pandemic], I feel privileged to be able to present the film all around the world simultaneously.

DEADLINE: John David, you’re had an interesting year. You were the lead in Tenet, a film heralded as the savior of cinema last year when it got released, and you were also one of the leads in Malcolm & Marie, a specifically lockdown project released on Netflix. How did those experiences differ?

WASHINGTON: I just appreciate getting to do what I love to do, regardless of the budget. I like to try out different experiences. Both those films had different budgets, crew members, personnel. I loved them both the same.

DEADLINE: How different do those polarized styles of releases feel as an actor? A traditional theatrical roll-out versus being available online globally simultaneously.

WASHINGTON: Sure, yes. But every film feels different no matter how it gets released, streaming or theatrical. That’s in my very short experience, I am still learning, experiences things.

DEADLINE: Ferdinando, you were a second unit director on Call Me By Your Name and Suspiria, this is your English-language debut. What was that transition like?

FILOMARINO: I was a director before I did second unit, I started on short films, I had one [Diarchy] that premiered at Locarno. By the time it got to Beckett I was lucky enough to have quite a range of experiences sitting in that director chair. I mostly just felt lucky. Because of the ambition of this project, it’s much bigger than my first feature [Antonia], the key was having an amazing team of collaborators. We had a whole team of very talented people, that makes it more exciting and easier.

DEADLINE: John David, after Ballers you moved into features and seemingly haven’t looked back. Are you a ‘movie actor’ now?

DEADLINE: You mentioned your sports career – how do the two careers compare?

WASHINGTON: I didn’t enjoy the professional aspect of sports as much as I did the sports itself. I was able to learn so many life lessons from sports. How to persevere, like Beckett has to. A lot of the time we see athletes who, when they lose their ability to play, they lose their identity. That’s something I can very much relate to. Football was my identity for so long. It’s a scary notion that your life starts at 25 [after you retire] but you feel like you’re 55. Other things have carried over for me – team concepts, listening to your coach (your director), and being able to play with people who don’t share your political or social views.

DEADLINE: On the subject of identity, do you think you might be more famous than your dad [Denzel Washington]?

DEADLINE: Earlier in your career, was it a challenge having a famous father, did you feel the need to step out of his shadow? Did you feel like people took you as seriously as you might have done if you had a different surname?

WASHINGTON: I was concerned with that for a long period of my life. That’s probably why I played so long, and suffered so many concussions, in football. When I realized there was no escaping it, I was able to relax into my life and enjoy what I wanted to do. It’s more of a question for people I’ve gotten to work with, whether they hired me because of who I’m related to, it certainly didn’t feel that way.

FILOMARINO: I remember watching BlacKkKlansman and Monsters And Men and thinking, ‘is this the same actor?’ The style and form of acting was amazing. That was what struck me and made me want to collaborate with him.