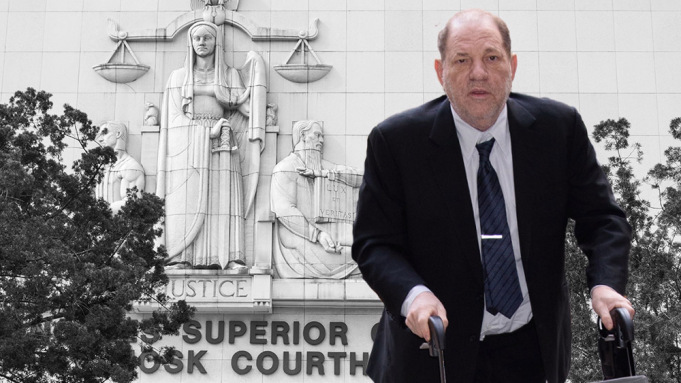 Harvey Weinstein’s lawyers are asking a judge to order grand jury transcripts and exhibits sealed in the case of the disgraced film producer, contending that the documents’ release could prejudice Weinstein’s right to a fair trial on charges involving five women. Those charges include forcible rape.

“Few cases in recent history have garnered the amount and intensity of press attention, public scrutiny, and heightened media frenzy as the instant case,” Weinstein’s attorneys wrote in a court filing Thursday.

“From the moment that allegations were first made against Mr. Weinstein, and before charges were ever filed in either New York or California, the media blitz around the case worked to quickly make Mr. Weinstein’s name virtually synonymous with wrongdoing and abuse.”

The defense contends in the court filing that the grand jury transcripts and exhibits “contain highly personal and invasive details about Mr. Weinstein’s medical and psychological history, and even intimate details about his physical body and anatomy” and that a “heightened focus and scrutiny while the community is already inundated and saturated with news about this case will further prejudice Mr. Weinstein by making it that much more difficult to find impartial jurors.”

Weinstein, 69, was extradited July 20 to Los Angeles from New York, where he has been sentenced to 23 years in prison for raping an aspiring actress and a criminal sex act against a former production assistant.

Weinstein was indicted March 15 by a grand jury in Los Angeles on four counts each of forcible rape and forcible oral copulation, two counts of sexual battery by restraint and one count of sexual penetration by use of force.

At a hearing Thursday, Superior Court Judge Lisa B. Lench rejected a defense bid to dismiss two of the charges against Weinstein based on claims they are precluded by the statute of limitations, but agreed to allow the prosecution the opportunity to amend a third count challenged by the defense.

Within hours of the judge’s ruling, a grand jury handed up an amended indictment against Weinstein involving the challenged charge of sexual battery by restraint — the only count involving one of the five alleged victims in the 11-count indictment.

“…The indictment supersedes and took the place of the prior complaint,” according to the amended indictment, which notes that Weinstein was initially charged in April 2020 and was “continuously charged with the same conduct with the same charge against the same victim until the present.”

Shortly after the judge’s ruling, one of Weinstein’s attorneys, Mark Werksman, told reporters, “You can put a fork in count five. It’s done.”

The defense attorney said “one-fifth of the prosecution’s case has been gutted,” adding that the defense believes there is no factual or legal basis to allow that count involving the alleged May 2010 crime to proceed.

The judge had sustained the defense’s challenge on that charge, but agreed to Deputy District Attorney Paul Thompson’s request to amend the indictment.

Los Angeles County prosecutors initially charged Weinstein in January 2020 with forcible rape, forcible oral copulation and sexual penetration by use of force involving one woman on Feb. 18, 2013, and sexual battery by restraint involving another woman a day later.

Weinstein was subsequently charged in April 2020 with sexual battery by restraint — one of the counts challenged by the defense — involving a woman in May 2010.

A grand jury subsequently indicted Weinstein on the same charges, to which he pleaded not guilty last week.

Weinstein could face a potential maximum of 140 years to life in state prison if convicted as charged, the District Attorney’s Office said earlier.

After last week’s court hearing, Werksman said the latest allegations against his client are not corroborated by any scientific or forensic evidence, adding that he believes Weinstein “will be acquitted” if he gets a fair
trial.

Attorney Gloria Allred, who said she represents two of the alleged victims, said last week that it was “long overdue” for Weinstein to appear in a courtroom in connection with the Los Angeles case.