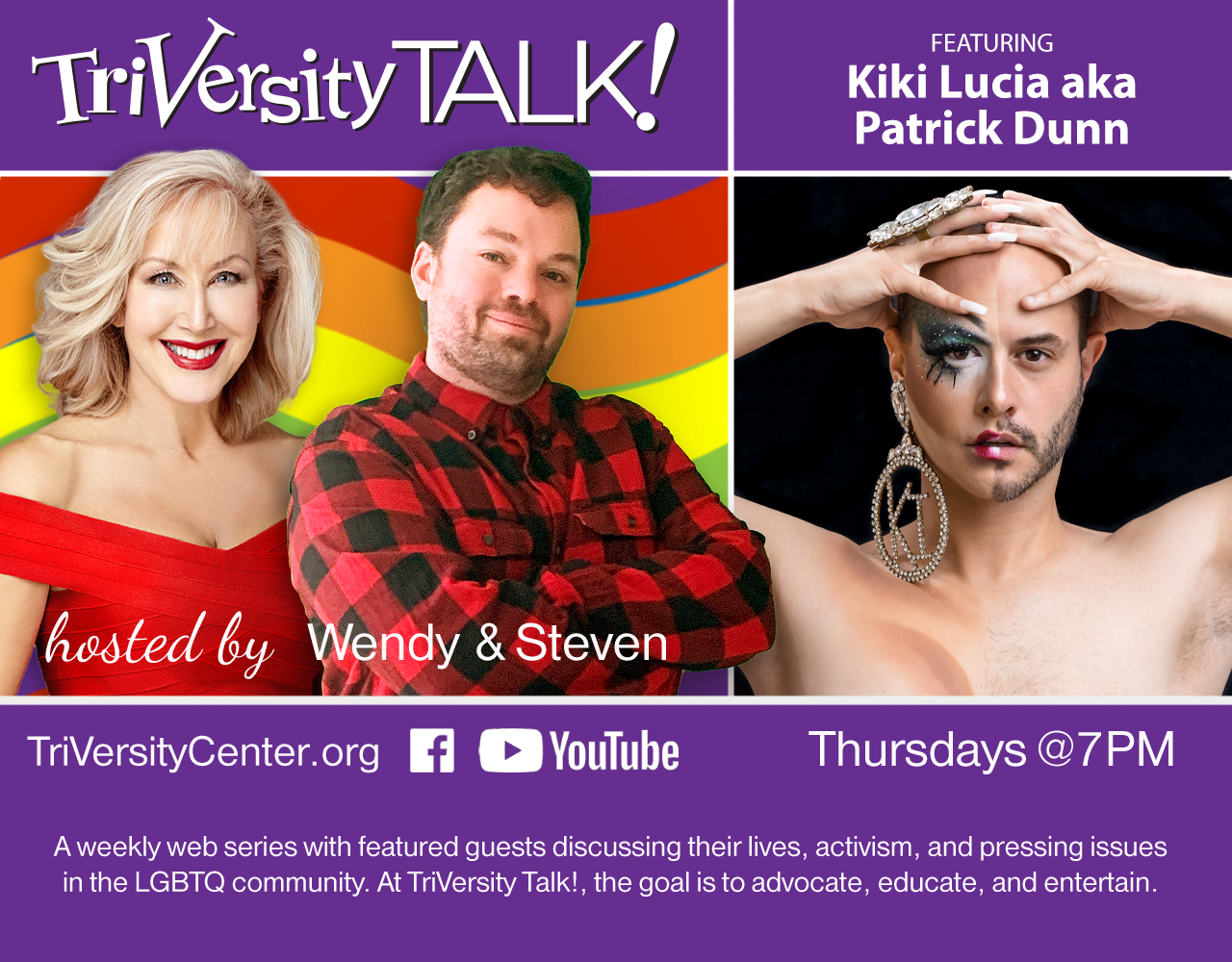 TriVersity Talk! is a weekly web series with featured guests discussing their lives, activism and pressing issues in the LGBTQ Community. With TriVersity Talk!, the goal is to laugh and learn.TriVersity Talk! Is part of TriVersity’s ICARE Initiative. ICARE stands for Increasing Community Awareness through Relevant Education. ICARE Programs are generously funded by The Greater Pike Community Foundation.

LIVE on Thursday, October 28th at 7 pm ET, TriVersity Talk! welcomes the stunning Kiki Lucia! Wendy and Steven are very excited to talk more with Kiki, aka Patrick Dunn, about her extensive performing career, her advocacy as Patrick, and so much more.

More on Kiki/Patrick: Kiki Lucia is a New Haven, CT-based drag performance artist with a vast training and performance background that includes numerous disciplines: classical ballet, aerial acrobatics, music theatre, modern dance, and acting. She also has a strong background in theatre production, directing, and costume and production design, and producing as well. She regularly performs throughout Connecticut as well as appears at events in Massachusetts, Rhode Island, and New York. Some notable roles she has played include Sarah Sanderson in Hocus Pocus Live (Summer Orlando Productions), Roxie Hart in Chicago (Summer Orlando Productions), and as a featured performer in 3 different productions of Escapade: An Unusual Experience (Luis Antonio Productions)!

Her show Let’s Have a Kiki has regular performances at Partners Café in New Haven, Trevi Lounge in Fairfield, and the Chez Est in Hartford as well as a brunch at Te Amo Tequila in New Haven. Let’s Have a Kiki features a variety of regional drag performers and burlesque artists and celebrated its 50th show in August 2019. She is also a cast member of Ladies of Illusion and a regular guest artist of Lipstick, Lashes and Lies at Comix Roadhouse, Mohegan Sun. When not performing, Kiki uses her experience as a non-profit and fundraising professional to raise awareness and funds for many LGBTQ+ organizations and causes, and serves as Board Vice President and a member of the Imperial Sovereign Court of All Connecticut, Inc, where she holds the title of Monarch XX. 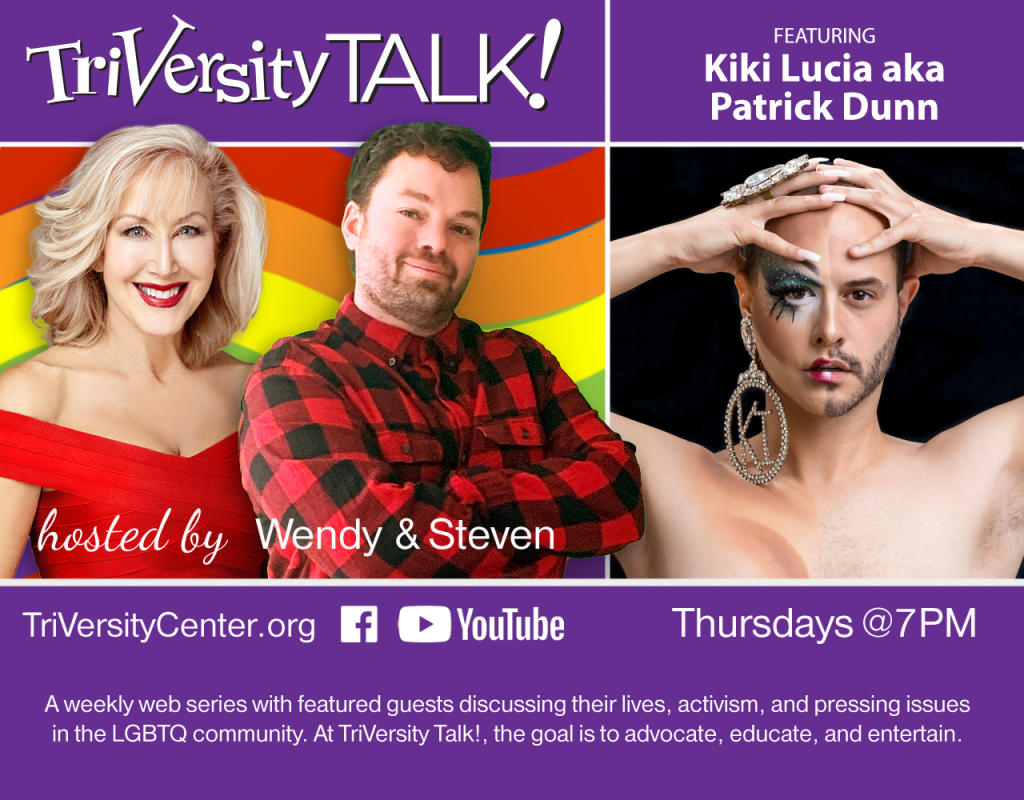 Patrick Dunn (he/him) moved to Connecticut in 2003 from Ankara, Turkey to attend the University of Hartford. He holds a bachelor’s degree in nonprofit management with additional studies in creative writing and theatre. His advocacy for the LGBTQ+ and HIV+ communities started while he was a student at UofH, serving on the Board of LGBTQ+ student-led organizations and getting involved with community groups such as Love Makes a Family, Connecticut AIDS Coalition (now Connecticut AIDS), and the Hartford Gay & Lesbian Health Collective.

Patrick has worked professionally in the nonprofit sector for over fifteen years, spending time at Hartford Stage, the National Steinbeck Museum, and the International Festival of Arts & Ideas before coming to the New Haven Pride Center in 2017 where he became the first employee of the 20-year old organization.

In addition to his professional work, Patrick has helped fundraise for many organizations including the Imperial Sovereign Court of All Connecticut, the New Haven Free Public Library and Y2Y New Haven. Patrick has also helped organize and produce major public events including the PRIDE New Haven, the Wooster Square Cherry Blossom Festival and Mayor Toni Harp’s Inaugural Ball that had more than 1,500 attendees. Patrick currently sits on the board of directors for the New Haven Free Public Library Foundation, is Vice-President of the board of the Imperial Sovereign Court of All Connecticut, and is an Advisory Board Member of Y2Y New Haven. He is also an appointed member and Chair of the LGBTQ+ Health and Human Services Network, a state subcommittee of the Connecticut Commission on Women, Children and Seniors and a Commissioner and soon to be elected Chair for the City of New Haven’s Cultural Affairs Commission.

The official website for The TriVersity Center may be found at

Sadiq Khan demands explanation from police after ‘smoking gun’ No 10 pictures – as Shapps denies PM was partying
Book Riot’s Deals of the Day for May 22, 2022
The best hotels in London to visit in 2022, from the boutique to the downright luxurious
Doja Cat Pulls Out of the Weeknd Tour to Recover From Tonsil Surgery
Rep. Joaquin Castro asks FBI to investigate police response timeline in Texas school shooting as controversy grows