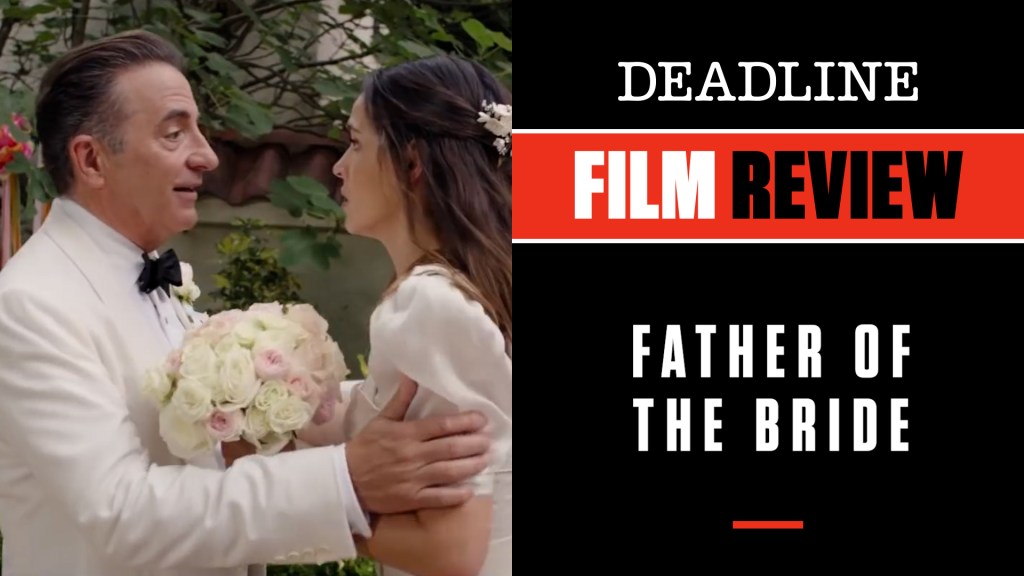 It is tough to top Spencer Tracy and Steve Martin, and this new Father of the Bride, with its distinctly Latino flavor, seems to know that. But it was 40 years between the classic 1950 first pic, where Tracy got quietly overwhelmed by the impending marriage of daughter Elizabeth Taylor, and the 1991 remake that paired Martin and Diane Keaton in a warm and wonderful update. Both those films spawned immediate sequels, and deservedly so.

Now it has been 30 years since the first remake, and the latest attempt starring Andy Garcia and Gloria Estefan is a distinctly Cuban-American-flavored reboot that, while not quite as genuinely warm and funny as its predecessors, manages to prove that this concept of an exasperated father trying to deal with his little girl’s impending nuptials is a truly universal thing, as are the family ties that bind us.

Smartly, Garcia — too smart of an actor to do otherwise — does not try to erase the memories of Tracy and Martin but still puts his own stamp on the role of a dad upended by his daughter getting married. And it is all about him, hence the title. Admirably, Warner Bros and the classy Plan B production company run by Oscar winners Brad Pitt, Jeremy Kleiner, and Dede Gardner do not try to emulate what has come before, but instead create a movie that both in front of the cameras and behind gives opportunity where it hasn’t been often done before to the Latino filmmaking community in taking on a crown jewel in the Hollywood firmament and making it come alive on its own terms.

In this version from director Gaz Alazraki (the Mexican smash hit Nosotros Los Nobles) and screenwriter Matt Lopez (The Sorcerer’s Apprentice) — who, according to the credits, bases his script on Edward Streeter’s original novel rather than the previous films — there is also a different hook leading us into the main event. Garcia’s Billy Herrera and Estefan’s Ingrid Herrera have decided to call it quits on their marriage after Ingrid just can’t take it anymore. The plan is to announce it to the family at dinner, and that includes to both their daughters Sofia (a spirited Adria Arjona) and Cora (Isabela Merced). Just as about they are to deliver the earth-shattering news, Sofia announces she and boyfriend Ada Castillo (Diego Boneta) have impulsively decided to get married and plan to do it within the month.

This sets all the conflict and comedy in motion as Billy, with his very old-fashioned sensibilities, decides Adan (Diego Boneta) isn’t the right catch for his daughter, largely because Adan is dedicated to helping the world by working for a nonprofit, something Billy thinks will not allow Sofia to live in a style to which she is accustomed. The fact that Adan clearly is a good guy doesn’t seem to enter into it, and the fact that they are moving to Mexico to continue their work really doesn’t sit well with Dad. His negativity does not exactly endear us to the patriarch, even as Garcia does everything in his power to give this guy and his rather plebian and conservative view of family some dimension. The simmering tension between him and Ingrid also stands to put a bit of a sour taste to the proceedings, even though a third-grader could predict how this will all end up.

Comic relief, just as it did with Martin Short’s Franck in the ’90s Father of the Bride films, comes with the arrival of wedding planner Natalie Vance (played purely for laughs by SNL‘s Chloe Fineman), who has to put the frenetic plans in place in order to pull off a major wedding in virtually no time since the bride and groom are in a hurry to tie the knot. Fineman, at times stretching credibility, tries to make the most of it, as does the entire cast, which also includes Pedro Damian as the father of the groom and a host of wonderful Cuban American and Latino supporting players and musical performers. In fact, one of the highlights of this reboot is the terrific soundtrack, which not only includes traditional Cuban music but also the jazz stylings of composer Terence Blanchard’s score.

It is all pleasant enough to revisit the time-honored idea of what a father goes through when he realizes he is no longer the main man in the life of his beloved daughter, and Garcia in particular makes it credible, even when the slapstick threatens to drown everything out. Alazraki fortunately keeps it all on course, and the film should find a welcome audience on HBO Max, where it begins streaming on Thursday just in time for Father’s Day (of course). Paul Michael Perez also is a producers along with Kleiner and Gardner. Check out my video review with scenes from the film at the link above.

Do you plan to see Father of the Bride? Let us know what you think.