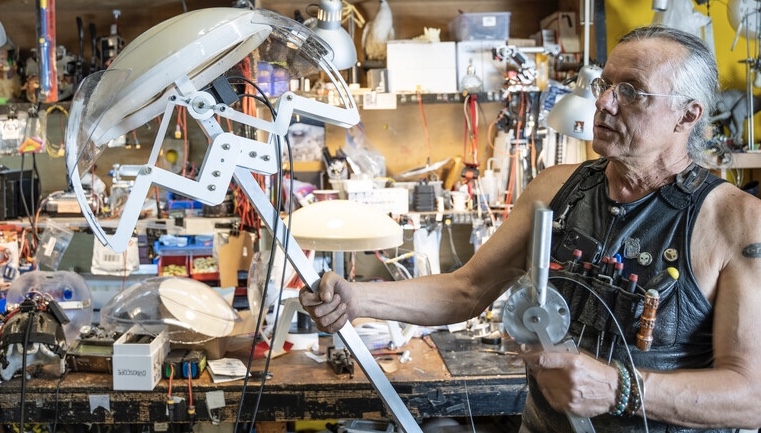 The RSC’s most ambitious project to date — even more so than the award-winning theater company’s original productions of musicals Les Miserables and Matilda the Musical — My Neighbour Totoro now has creatives working on it at bases in London, Stratford-Upon-Avon, Los Angeles and Tokyo.

Show will feature the score that composer Joe Hisaishi created for the film, plus additional music that wasn’t used in the movie.

Set in 1950s Japan, the story follows the adventures of Satsuki and Mei, young sisters who move from Tokyo city to the countryside. Once there they encounter spirits and awesome creatures. Two furry ones capture their imaginations: a giant fluffy creature known as the Totoro and a gargantuan cat bus that collects willing passengers then soars off into the sky.

Special attention is being paid at the Jim Henson’s Creature Shop, part of the Jim Henson Company, to those two mysterious creatures. Phelim McDermott, co-artistic director of theater company Improbable, is directing the show and has pointedly refused to reveal to Deadline how the cat bus will fly. “It’s theater magic,” is as much as he’ll allow.

The puppets being built at Creature Shop are based on designs created by Basil Twist, one of the UK’s most innovative puppeteers. Mervyn Millar, of Britain’s cutting-edge Significant Object puppet studio — it created puppets for the National Theatre production of War Horse and the RSC’s recent The Magician’s Elephant — will create additional puppets for My Neighbour Totoro.

Peter Brooke, creative supervisor of Jim Henson’s Creature Shop (where characters from The Muppets, Sesame Street and others shows and films are made) said in a statement released through the RSC: “We know all too well the importance of maintaining the visual style and personality of beloved characters.

”Whether an audience member is a longtime fan of this iconic story, or new to Miyazaki’s fantastical world, they will be simply amazed when they see these magical creatures live on stage in a whole new way in My Neighbour Totoro.”

The show will have an initial run of 15 weeks at London’s Barbican, with performances from October 8 through January 21, 2023. Tickets have been selling well and there’s much chatter here in London about the possibility of My Neighbour Totoro transferring from the Barbican into the West End. Just where it will go is, for now at least, a mystery due to the fact that houses big enough to take it are spoken for.

Certainly, one possible theater, The Prince Edward, is very well spoken for. The musical Mary Poppins is likely to end its long run there sometime next year, with the hot tips to replace it transfers from Broadway of musicals Ain’t Too Proud: The Life and Times of The Temptations followed by MJ: The Musical.

My Neighbour Totoro is being executive produced by Hisaishi with the RSC in collaboration with Improbable and Nippon TV’s Live Events operation.

Miyazaki’s Studio Ghibli films have become immensely popular since Netflix began streaming 21 of his films in February 2020, just before the pandemic lockdowns.

SAG-AFTRA’s Board Overwhelmingly Approves New Netflix Contract, Which Fran Drescher Calls “A Darn Good Deal” – Updated
Clothing subscriptions like Stitch Fix were once hot – but now might be the victims of ‘box fatigue’
Madonna and the Roots Play “Music” With Classroom Instruments on Fallon
Lib Dems call for parliament to be recalled to pass bill scrapping rise in energy price cap
Pitchfork London Adds Second Wave of Artists