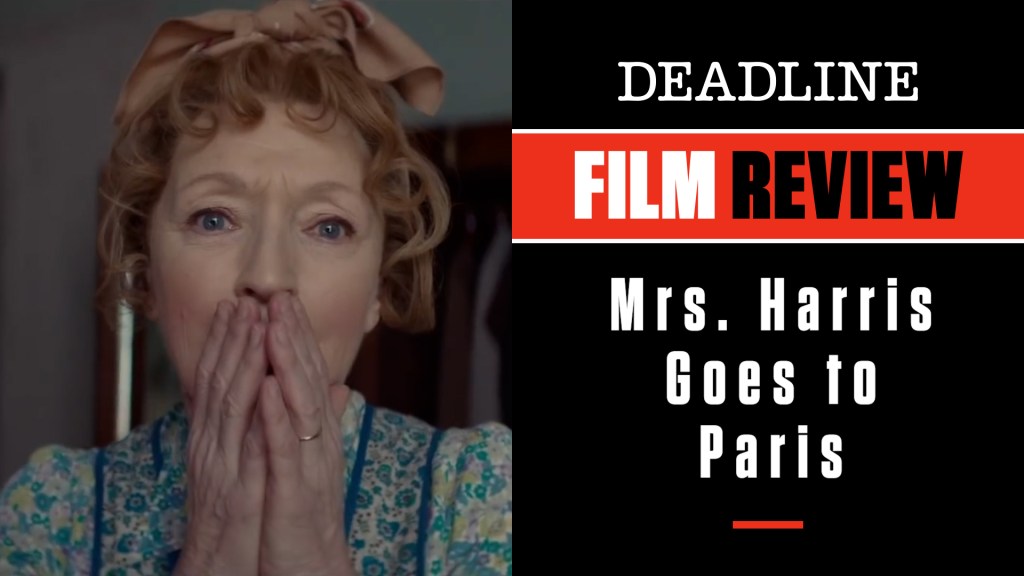 Adults looking for something to cheer about in the midst of a summer movie menu of Marvel, Top Guns and cartoon dogs can look forward to taking the journey from drab London to the seat of haute couture at the House of Dior circa 1957. That is what Ada Harris, a war widow and cleaning woman who dreams of buying her own Dior gown, actually does in the sweet, old-fashioned, heartfelt but smart Mrs. Harris Goes to Paris. This welcome confection will have you smiling, even shedding a tear or two along the way as a woman looking for something special in her unexciting life not only finds it in the most unexpected of places but also manages to change the lives of others she encounters.

Simply put, this film, which Focus Features is opening Friday exclusively in theaters on about 1,000 screens, is a complete joy, a true feel-good movie that seems like a gift in dark times. It’s an escapist fantasy not just for Ada but for the audience, and word of mouth is likely to be gigantic if the distributor manages to keep it alive long enough to be discovered, especially by the older female crowd for which it should have its greatest appeal. That is not to say this isn’t a movie that can entertain everyone who crosses its path. It might just surprise, so give the studio and filmmakers credit for believing that there are filmgoers out there looking for something that makes then actually feel OK about being alive.

In a luminous performance that somehow eluded the clutches of Meryl Streep, Lesley Manville gets a full-bore starring role as the title character who cleans houses in 1957 London and shares a friendship with co-worker Vi (the wonderful Ellen Thomas), an African Caribbean domestic with whom she confides her dream of traveling to Paris to buy a Christian Dior gown. This comes about after discovering a gorgeous Dior in the bedroom of Lady Dant (Anna Chancellor), the faux social climber for whom she works and who constantly cheaps out when it comes time to get paid. Nevertheless, with the help of Vi and their friend, a bookie named Archie (a terrific Jason Isaacs), she sets about saving enough money to make the trip, and that even includes some unfortunate racing bets. When she gets to Paris with no place to stay, a likable but seemingly homeless Frenchman shows her the way to her destination, the House of Dior, where by happenstance she soon finds herself whisked inside when she attempts to return the purse a Dior model named Natasha (Alba Baptista) unwittingly drops outside.

Once there though the Director of the legendary fashion house, Madame Colbert (played to perfection by French icon Isabelle Huppert) tries to get her out of there just as a big fashion show is about to begin. Like in any fairy tale, a handsome and dignified widower, Marquis de Chassagne (Lambert Wilson), magically comes to her rescue and invites her to sit with him, where she becomes a wide-eyed customer for the gown of her dreams. There are plenty of complications when a rude woman claims it for herself, and Ada becomes immersed in the workings of the establishment as they try to fit her for a different dress — one that will take at least two weeks to make. What can she do? She was due to go home right away but now must stay for several fittings.

As luck would have it, the kindly and handsome young accountant working there, Andre Fauvel (Emily in Paris star Lucas Bravo) takes a liking to her and offers his absent sister’s room in his apartment. This is the beginning of a beautiful friendship as she also plays matchmaker and tries to hook him up with Natasha. There are plenty of other complications as Mrs. Harris starts to conquer Paris, even becoming a temporary hero to striking workers outside Dior, and then later returning to London.

What we see is a lovely soul who in trying to bring some brief excitement into her own life winds up turning the tables and doing just that for just about everyone with whom she comes in contact. This all could have gone south, but in director Anthony Fabian’s assured hands, it never does. Yes, it is a feel-good fantasy of sorts but one that works as well as it does because it is also grounded in reality. These are all real people, relatable and recognizable, not stereotypes or the least bit over the top.

Fabian, who adapted Paul Gallico’s 1958 novel, Mrs. ‘Arris Goes to Paris with co-writers Carroll Cartwright, Olivia Hetreed and Keith Thompson, has changed some of action and motivations from the book, and even the previous 1992 TV movie version with Angela Lansbury, and given it more depth. Shot in London and Paris, with Budapest standing in for much of the City of Lights as it looks more like 1950s Paris than Paris today, the film has exceptional cinematography from Felix Weidemann and stunning re-creations of the House of Dior by production designer Luciana Arrighi. A costume designer’s dream job has been handed to three-time Oscar winner Jenny Beaven, and she doesn’t disappoint — not only with impeccable re-creations of classic Dior fashions but three newly created gowns that might as well have star billing with the actors.

If you can’t go to Paris yourself this summer, this little gem is easily the next best thing. Check out my video review with scenes from the film at the link above. Producers are Fabian, Guillaume Benski and Xavier Marchand.

Do you plan to see Mrs. Harris Goes to Paris? Let us know what you think.

Homebuilders say U.S. is in a ‘housing recession’ as sentiment turns negative
Ford raises price of electric F-150 Lightning by up to $8,500 due to ‘significant’ battery cost increases
Ethereum just pulled off its final test run ahead of one of the most important events in crypto
Denise Dowse Dies: ‘Insecure’ & ‘Beverly Hills, 90210’ Actor Was 64
Even airline employees are having trouble finding a seat home from Europe this summer