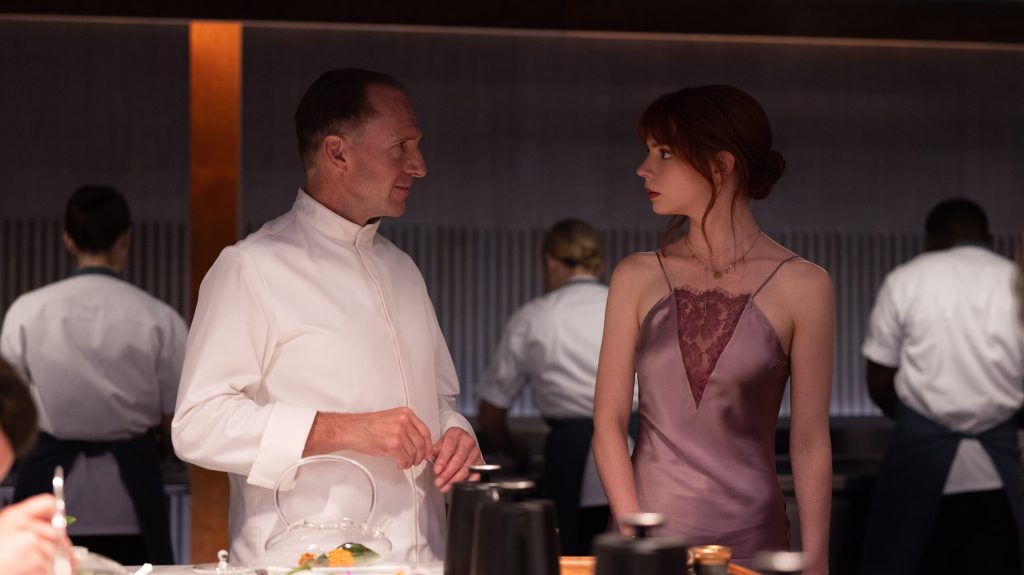 UPDATED, 8:10 a.m.: Searchlight Pictures has released the official trailer for its starry horror film The Menu, from director Mark Mylod (Succession), which bows in theaters on November 18.

The darkly comic feature follows a couple (Anya Taylor-Joy and Nicholas Hoult) as they travel to a coastal island to eat at the exclusive restaurant Hawthorne, where Chef Slowik (Ralph Fiennes) has prepared a lavish menu, with some shocking surprises.

“Tonight will be madness,” Hoult’s Tyler tells Taylor-Joy’s Margot as they enter the eatery.

Little does Tyler know how true that is, as he discovers the “game” he and his fellow guests will be forced into—one that, it seems, will have them hunted down by Hawthorne’s cannibalistic, cult-like staff.

“This menu, this guest list, this entire evening has been painstakingly planned,” says Chef Slowik. “This is what you’re paying for. It’s all part of the menu.”

More information about the film can be found below. Watch the trailer above.

PREVIOUSLY, JUNE 1: Searchlight Pictures today unveiled the first teaser for its darkly comic horror film The Menu, starring Ralph Fiennes (The King’s Man), Anya Taylor-Joy (The Northman) and Nicholas Hoult (The Great), which is slated for release in theaters on November 18.

The film from director Mark Mylod (Succession) sees a couple (Taylor-Joy and Hoult) travel to a coastal island to eat at an exclusive restaurant where Chef Slowik (Fiennes) has prepared a lavish menu, with some shocking surprises.

The trailer watches as Slowik welcomes guests to the restaurant, which we learn is called Hawthorne. “It’ll be our pleasure to feed you,” he says. “Over the next few hours, you will ingest fat, salt, protein and at times, entire ecosystems.”

This sounds fair enough, though Hawthorne’s dark side is soon enough revealed, with the Chef warning Taylor-Joy’s Margot that she shouldn’t be there. “You, my dear guests, are not the common man. Isn’t that right?” he later says. “What happens inside this room is meaningless compared to what happens outside. We are but a frightened nanosecond; nature is timeless.”

While it’s not been explicitly stated what “shocking surprises” await those heading to Hawthorne, it seems probable that cannibalism plays some role in this tale.

Watch the film’s trailer above.