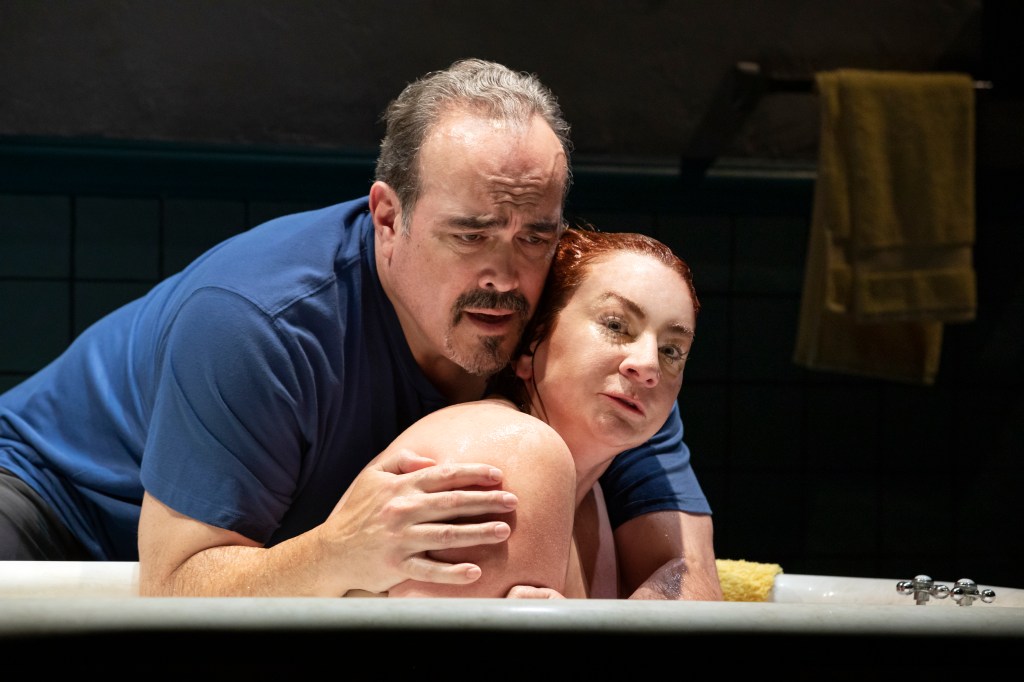 A Pulitzer Prize can be a burden, one must assume, trumpeting expectations and pumping reputations from a distance. Martyna Majok‘s Cost of Living won the trophy in 2018, and that victory has been mentioned often in the lead-up to the play’s opening on Broadway tonight in a Manhattan Theatre Club production at the Samuel J. Friedman Theatre.

An often moving, not quite as often cloying but generally disappointing quadruple portrait of two “differently abled” people — the term is loathed by at least one of them — and the not-quite-prepared caregivers enlisted to assist them, Cost of Living does better as character study than workable play. Still, it has more than a few moments of grace — and a fine cast — that combine to raise it beyond the well-meaning exercise it might otherwise have been.

Cost of Living, directed by Jo Bonney, begins with an out-of-chronology monologue that contributes little but confusion, despite being performed to a T by David Zayas (Dexter, Blue Bloods). He plays Eddie, an out-of-work trucker from Jersey reciting one of those one-sided bar conversations designed to showcase acting chops (mission accomplished). The tough-talking, working-class Eddie has been stood up by a phone hook-up date in the unlikely place of a Williamsburg hipster bar. Not that he minds all that much — he’s still grieving the recent death of his wife, a relationship we’ll learn more about soon enough.

The next pair of characters we’ll meet is is John and Jess. He’s a wealthy, witty Princeton professor with cerebral palsy (Greg Mozgala, an actor with cerebral palsy) looking to hire a personal assistant. Jess (Kara Young) is a 25-year-old Princeton grad working piecemeal bar gigs to make ends meet, and though the two are different in so many ways beyond their outward physical capabilities — he’s white and rich, she Black and struggling — both are defensive and proud and will seem the sort of odd couple match a play like this demands.

To be clear, though, this is no Neil Simon comedy. We’ll next meet (or in the case of that bar-goer, re-meet) Eddie and Ani (Katy Sullivan), a separated husband and wife — he has moved on to a new girlfriend — brought back together by terrible circumstance: As a result of an car accident, Ani has lost both legs and the use of her arms. Whether out of guilt or pity or love — likely, all three — Eddie soon finds himself back in Ani’s life as her caregiver, a situation that’s easier for him than for the still-angry, hurt and resentful Ani.

Over the course of the play’s intermissionless two-plus hours, the pairs will learn much about one another and themselves, with Majok making the point — a fairly obvious point, but sensitively presented — that everyone carries a disability of some sort, some more visible than others. The play does a good job of presenting the shifting power dynamics inherent in each pairing, raising questions of identify politics, class, race and the intricacies of sacrifice (though who is sacrificing what and to whom isn’t always apparent).

If the play often feels formulaic, well, it is. The mention of the intricate mechanics involved in John’s shower routine, and the intimacy demanded between him and his caregiver, foreshadow the inevitable scene in which Jess and John carry out the routine with the skill and sensitivity of two souls connecting. A similar scene unfolds with Eddie and Ani, as the two battle-scared survivors reconnect with a depth that escaped them in so-called happier days.

Unfortunately for the play, Majok’s string-pulling gets the better of everyone. A potential romantic development in the story of John and Jess arrives so quickly and is fumbled so badly — with a misunderstanding that wouldn’t be out of place in a sitcom or soap opera — that the play never recovers. Meanwhile, a near-tragedy over at Ani’s place comes and goes with the feeling of a pulled punch, or rather, a punch delayed.

As character study, Cost of Living can be moving, funny and intriguing, but the plot mechanics and string-pulling undercut the drama. When the two stories finally commingle, the hopeful ending — well, hopeful for some — feels as though it’s been predetermined from the start, with all the tragedy, cross-messages, hurt feelings and dashed dreams set in motion for no reason other than the late-night meeting of two strangers who’ve survived the plot.

‘Fash’: Justin & John Fashanu Biopic Set At ITV From BAFTA Nominee Kwame Kwei-Armah
‘Super Mario Bros’ Second Trailer Shows Off Donkey Kong, Princess Peach & More
‘It was shocking to see the material was that bad’: Friend of girl who died from self-harm hits out at social media
Peter Kay in tears as he gets standing ovation at start of comeback gig
PM seeks ‘constructive’ approach with time running out to avoid bleak winter of strikes