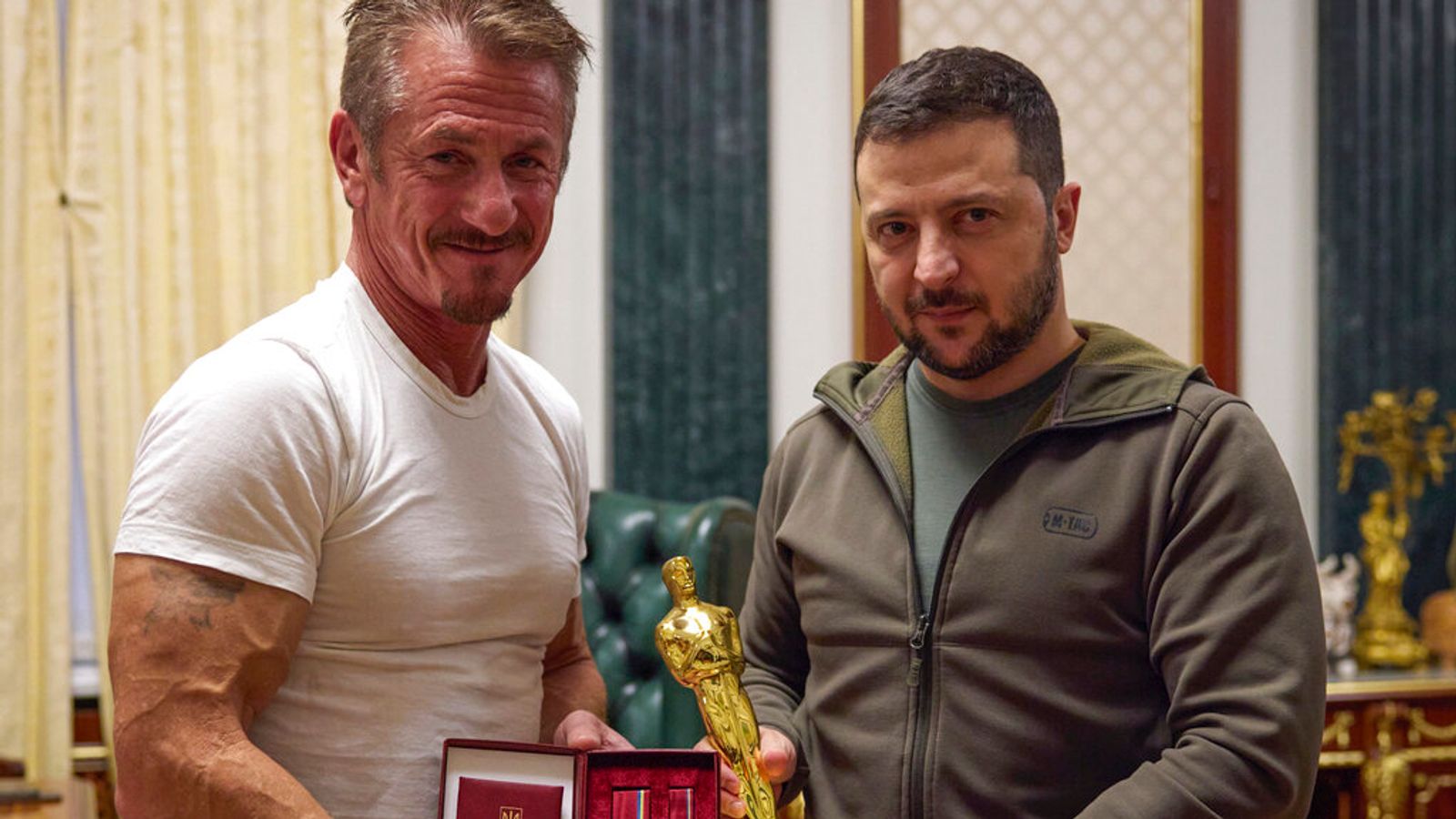 Oscar winner Sean Penn has given one of his awards to Ukrainian President Volodymyr Zelenskyy during a third visit to the country amid Russia’s ongoing war.

Penn, who was forced to leave Ukraine in March while filming a documentary about the conflict, donated the trophy as a “symbol of faith” in the country.

The Hollywood star has twice been named est actor at the Oscars – for Mystic River in 2004 and Milk in 2009.

During a meeting with Mr Zelenskyy, the actor handed him one of his golden statuettes, saying it was “just a symbolic, silly thing” but “if I know this is here with you then I’ll feel better and stronger for the fight”.

He added: “When you win, bring it back to Malibu. Because I’ll feel much better knowing there’s a piece of me here.”

The statue will stay in Ukraine until the end of the war.

During the meeting, the Ukrainian president presented Penn with the country’s Order of Merit of the III degree, thanking him for his “significant contribution” to the war effort.

The actor’s name was also placed on a stone on Ukraine’s Walk of the Brave, which recognises “brave people who have stood with Ukraine from the very beginning” and features many world leaders who have helped since the outbreak of the war.

He has reportedly previously said he had considered fighting for Ukraine during the conflict.

Alongside footage from the visit on Instagram, a post on Mr Zelenskyy’s Instagram page read: “American actor and film director Sean Penn came to Ukraine for the third time during the full-scale war already.”

It continued: “This time our meeting was special. Sean brought his Oscar statuette as a symbol of faith in the victory of our country. It will be in Ukraine until the end of the war.

“It was with great pleasure that I presented Sean Penn with the Order of Merit of the III degree. Thank you for such sincere support and significant contribution to the popularization of Ukraine in the world.”

Read more:
Ukraine: A modern war
What are Iranian drones doing in Ukraine?

Later this month, Penn is due to be honoured with the Bob Hope Humanitarian Award by the Television Academy for his “decades of activism”.

In September, the actor was included on a list of 25 Americans sanctioned by Russia in response to their public criticism of the war on Ukraine.

Like Penn, Stiller has been a vocal supporter of Ukraine during the conflict.

Hyaluronic acid explained: uses, benefits, and the 20 best serums for every skin type
Matt Lucas Exits ‘Great British Bake Off’ After Three Seasons & Cohost Noel Fielding Dedicates Him A Farewell Post
‘Moonage Daydream’ Explores David Bowie’s Growth & Journey As An Artist – Contenders Documentary
Christmas travel hit by new strikes as Border Force set for airport walkouts
Man behind the Korean wave talks about the future of K-pop and what aspiring artistes can do