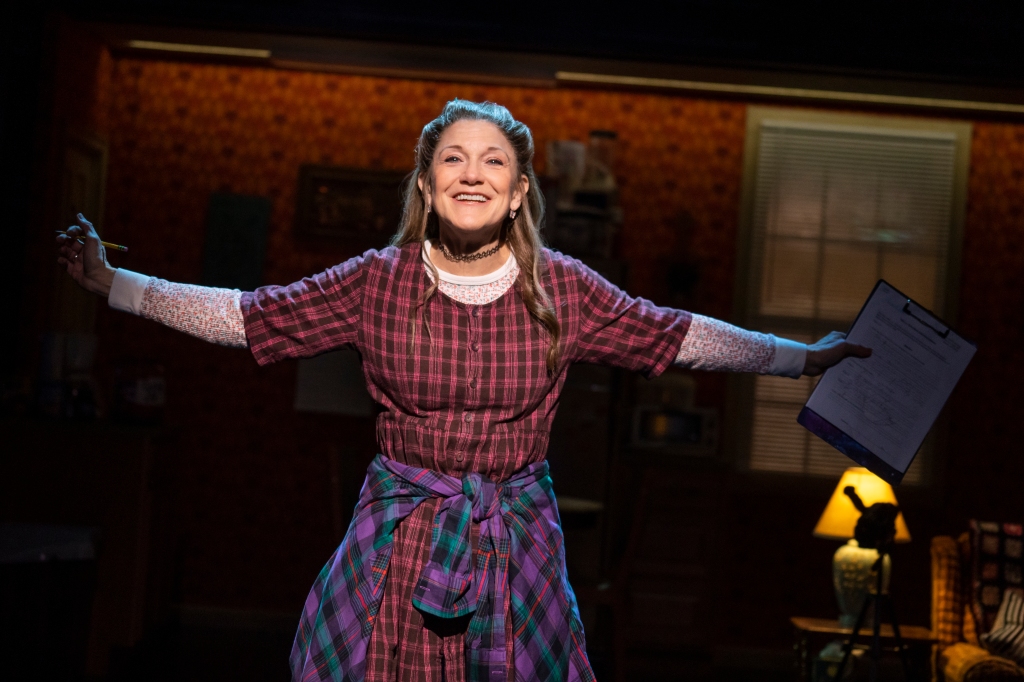 Kimberly Akimbo, one of the unlikeliest, most exhilarating and unfailingly moving musicals to hit New York in years, opens on Broadway tonight having lost none of its immense charm since its Off Broadway debut lsat year swept just about every critics award there was to be swept.

Opening tonight at the Booth Theatre with its original Off Broadway cast intact, the miraculous Victoria Clark leading the very fine ensemble, Kimberly Akimbo remains a stunner, a sly, quirky, eccentric work of stage art transformed into a crowd pleaser by playwright David Lindsay-Abaire’s captivating book and lyrics, Jeanine Tesori’s delightful music that, like Kimberly Akimbo itself, works its way into your heart with a jauntiness that both hides and ultimately amplifies its serious ambitions. Add to all that a winning group of singing actors, from young newcomers to stage veterans, that work together with an ease and chemistry that’s apparent from the start and only grows in power toward an emotional and thoroughly satisfying end.

Directed by Jessica Stone and choreographed by Danny Mefford, Kimberly Akimbo tells the story of young Kimberly Levaco, a 16-year-old high school student who, due to a rare genetic aging disorder, looks less like her classmates and more like their grandmothers. Played by the 60-something Clark (a Tony winner in 2005 for The Light in the Piazza), this Kimberly is a remarkable stage creation, emotionally credible as an adolescent (and without the cloying affectations usually employed by adults playing kids) but with the strained optimism and evident worry of someone who knows her time will be short, a knowledge etched into every line of Clark’s face.

Following the blueprint of his earlier non-musical play of the same name, Kimberly Akimbo – an explanation of the title shortly – follows both the family and school lives of its heroine. In her dysfunction home, Kimberly spoon-feeds cereal to her self-obsessed hypochondriacal mother Pattie (a wonderfully funny Allie Mauzey), whose arms are in casts from a recent – and, one suspects, possibly unnecessary – operation for carpal tunnel. Oh, and Patti is very, very pregnant, a should-be happy circumstance that everyone, Kimberly most of all, recognizes for what it is: “I want this one to be perfect,” Patti blurts with barely a second thought.

Kimberly’s father Buddy (Steven Boyer, matching Mauzey laugh for laugh and cruelty for cruelty) is an alcoholic who seems incapable of following through on even the easiest promise to the wife he once loved and the daughter he so clearly does. We first meet Buddy when he arrives hours late to pick up Kimberly from her lonely visit to the local skating rink.

A bit later we’ll meet Kimberly’s Aunt Debra (a tour de force Bonnie Milligan), whose life of petty (and not so petty) crime leaves her homeless and squatting in the Levaco basement, where she hatches her next bit of outlawry (something involving weird chemicals, a stolen mailbox and pilfered checks – all becomes clear soon enough).

Kimberly’s medical diagnosis serves as both a literal condition and a metaphor for all children forced to grow up too quickly to care for the damaged adults in their lives. Amazingly, that dual-purpose doesn’t play nearly as contrived as its description might suggest.

At school, Kimberly is, to say the least, an outcast, an object not so much of ridicule or bullying as curiosity. Mostly, though, she’s just invisible. We meet four of her classmates at that skating rink (played so well by Nina White, Michael Iskander, Olivia Elease Hardy and Fernell Hogan), themselves an uncool quartet of quirks and secret longings. The group’s one and only goal – well, aside from the clearly doomed aspirations of romance each has for one of the others – is to raise enough money to buy glitzy costumes for the Dreamgirls number they want to do in a school musical competition. Aunt Debra senses some easy pickings.

And finally there’s Seth (young Justin Cooley in a remarkable New York debut), a tuba-playing, Elvish speaking nerd who makes even the other outcasts seem like prom kings and queens. Seth, whose obsession with anagrams turns Kimberly Levaco into Cleverly Akimbo, is a motherless and, for all intents and purposes, fatherless kid whose occasional verbal insensitivity – “You know, when I first saw you in the cafeteria, I thought you were a new lunch lady. Isn’t that funny?” – can’t disguise a sweet guilelessness that has him nervously asking Kimberly to partner up on a science project: Each pairing has to choose a disease and present a class report. Before she has time to really think it through, Kimberly agrees to Seth’s idea – they’ll do a presentation in front of the class on Kimberly’s rare genetic condition.

That storyline plays out – with results humorous, heartbreaking and life-changing for all concerned – alongside a funny but a bit more strained plot: Aunt Debra recruits Kimberly and her five new pals in a check-washing, bank-frauding scheme, a plan that takes full advantage of her niece’s ability to seem like a sweet old lady.

Any incredulity we might have about the ease with which these kids turn to a life of crime is more than worth it for the pleasure of watching it all play out. Just listen to the lyrics of “Better,” in which Debra shares her life philosophy with the impressionable nerds. Set to the type of ear-candy powerhouse melody that tricks you into assuming you’re in for a typical interlude of showtune inspiration, the wonderful Milligan belts out a great darkly comic song. Check out a typical autobiographical verse:

Her eager, newly recruited gang eats it up. So do we. Milligan is irresistible.

“Better” is just one of the musical highlights of the charming score. Tesori (who matches the work she did on the trenchant Caroline, Or Change), and her Shrek, the Musical lyricist Lindsay-Abaire stuff Kimberly Akimbo with one showstopper after another, most in equal parts laugh-out-loud funny and tear-inducing poignant. To pick a random few: There’s Kimberly’s increasingly extravagant (and knowingly impossible) roster of unlikely requests for the Make-A-Wish Foundation (“Make a Wish”); her early duet with Seth (“Anagram”) that hints at feelings neither are quite sure where to place (“I like the way you see the world,” she catches herself thinking about Seth. “I like your point of view. A little sly. A little strange. A little bit askew“); and there’s the outstanding “The Inevitable Turn,” in which a seemingly pleasant (and rare) family dinner goes sour (“It’s all going fine, then it changes so fast. A look, a joke, a sleight from the past, which will burn. Pass the salt, sling the mud. Carve the meat, draw the blood. Take the turn…)

The latter song is performed at a dinner table that slowly rotates as the family meal devolves into chaos and revelation, a fine example of both Stone’s clever direction and David Zinn’s versatile home-school-skating rink sets. The late 1990s setting is never overemphasized, but Sarah Laux’s costume design is spot-on without resorting to cartoon, never more so than with Kimberly’s wardrobe, a teen’s casual garb that Clark so comfortably inhabits. There’s a brief moment when we see Kimberly in a different light, and it draws audience gasps.

As the musical moves to its inexorable, breathtaking and life-affirming – but not-quite-how-you-think – conclusion, Kimberly Akimbo graces us with a series of images we won’t soon forget (the contributions of Lucy Mackinnon’s video projections, Jeanette Oi-Suk Yew’s lighting and Kai Harada’s immaculate sound design can’t be overstated). Those final moments follow through on the unspoken promises made throughout the production that Kimberly Akimbo and all of its a little odd, a little off characters will receive all the compassion and respect and clear-headed examination they deserve. Promises kept. Kimberly Akimbo is a triumph.