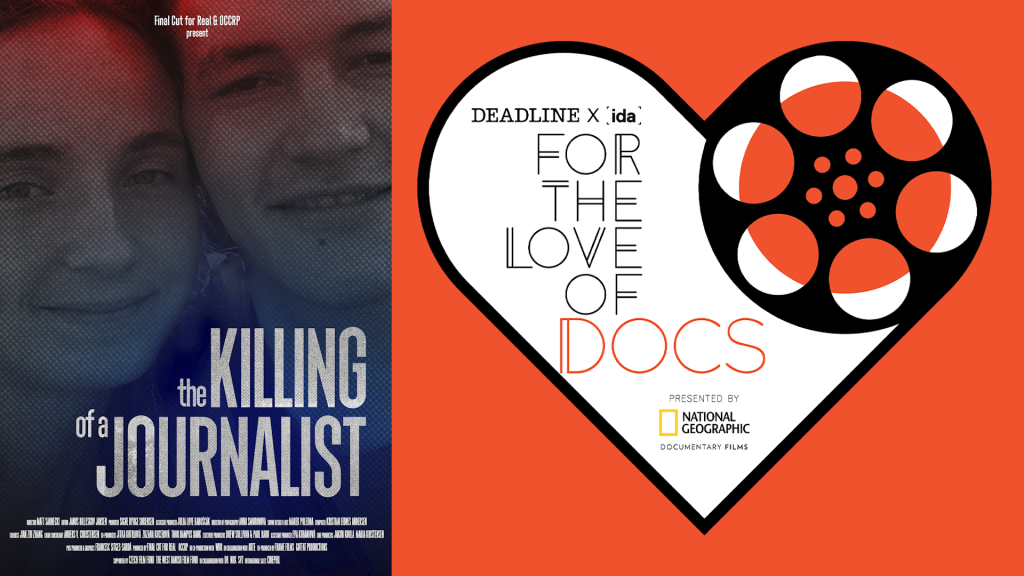 On the evening of February 20, 2018, bride-to-be Martina Kušnírová was looking online at wedding dresses while at the home she shared with her fiancé, journalist Ján Kuciak. They would not survive the night.

The documentary, directed by Matt Sarnecki, investigates the shocking murder of the young couple in the Galanta District of Slovakia, and finds evidence that powerful forces in the country wanted Kuciak dead and were prepared to pay to get the job done. The riveting and disturbing film played Tuesday night as part of Deadline’s virtual event series For the Love of Docs.

“The day after the bodies were found, Jan and Martina’s friends and some journalists, local journalists, asked me to come down to the crime scene because they wanted my help,” Sarnecki explained during a panel discussion after the screening. “The reason they wanted my help is one of my previous films looked into the murder of journalist Pavel Sheremet in Kyiv, Ukraine, in 2016. And that documentary used a forensic analysis of CCTV to identify suspects and problems with the investigation. So, they wanted me basically to try to do the same thing in Slovakia. And if someone asks for your help, you can’t say no.”

The deaths of the couple triggered massive public protests in Slovakia which toppled major political and law enforcement figures in the country one after another, including, eventually, Prime Minister Robert Fico and his cabinet. But the question of motive and who was responsible for the murders remained shrouded in mystery until the leaking of a computer drive that contained 70 terabytes of information pertaining to the case.

“It was at that point I realized a remarkable film can be made not just about the murder of a journalist,” Sarnecki said, “but how it led to, basically, a blueprint to show how a corrupt and captured state would work.”

The documentary contains shocking pieces of evidence and other investigative materials, like video of the hitman who confessed to the crime taking authorities step by step through the crime scene to show how he had killed Kuciak and then his fiancée. Recordings of cell phone conversations and other evidence suggested a powerful businessman — Marian Kočner — had contracted the killing after becoming upset by the journalist’s reporting on his shady activities. Kočner allegedly used an associate, Alena Zsuzsová, to arrange the murder (Kuciak’s fiancée apparently wasn’t an intended target, but collateral damage).

“They thought they were invincible,” Sarnecki said of Kočner and Zsuzsová. “I think there had been so many years of impunity where they thought they could do anything… Kočner… didn’t seem to be concerned. And the same with [Zsuzsová]… She didn’t seem to be concerned because I think the idea was, ‘We can get away with these things.’ And I think this is the culture. There was a culture of impunity in the country.”

He added, “I would say they were arrogant. But things changed. And in the end now they’re both sitting behind bars, not for the murders, but for other crimes.”

Sarnecki, an American-born investigative journalist and filmmaker, has lived in Eastern Europe for a decade. For The Killing of a Journalist, he worked with four-time Oscar-nominated producer Signe Byrge Sørensen.

“For us, it was really important to tell the story about what happens in a larger society, what happens to democracy when you have a system where an oligarchy is able to sort of take control over parts of the police and parts of the judiciary system and part of the political system,” Sørensen noted. “It’s also revealed how [Kočner] is in charge of some of these politicians as well and how they all were using each other. And that’s a larger society [issue] and more than a true crime [documentary], but really important, because if we don’t know that these things happen and if we don’t know the importance of journalists’ work to expose these kind of crimes, then we are not maybe not taking care enough of our media and our press. And we really need those to keep our democracies healthy.”

Watch the conversation in the video above. Our virtual event series For the Love of Docs is presented by National Geographic.

Akshay Kumar Teases Details Of Upcoming Amazon Series; Urges Industry To Stop Blaming Audiences For Theatrical Slump: “It’s Our Fault, We Need To Know What They Want” — Red Sea Studio
Paparazzi photo in Harry and Meghan trailer taken at premiere years before they met
‘Cheers’ Stars Ted Danson, Kelsey Grammer & Rhea Perlman Mourn Kirstie Alley
‘Feminists can’t tell us what to do with our bodies’: Sex workers fight council strip club ban
Man behind the Korean wave talks about the future of K-pop and what aspiring artistes can do