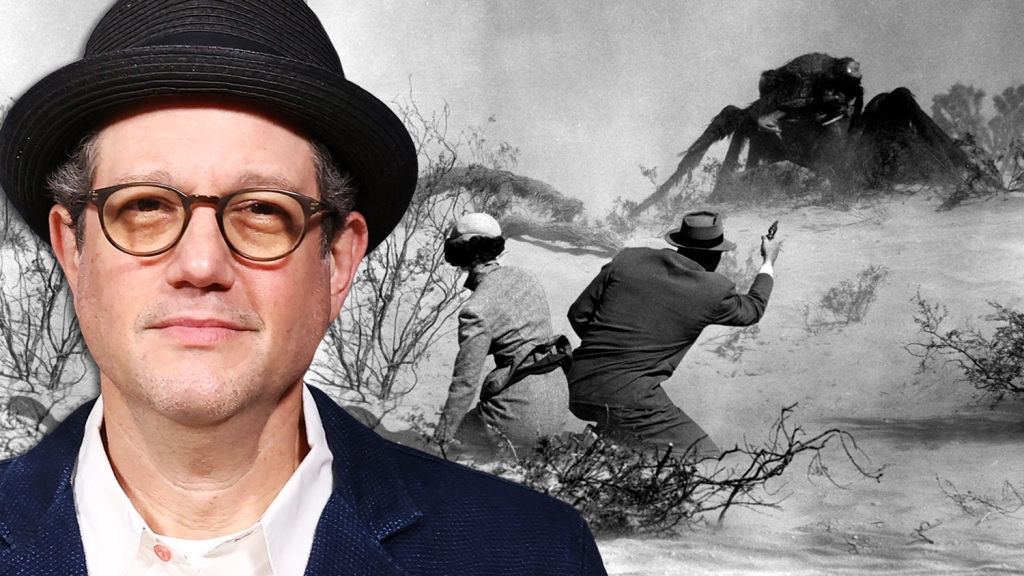 EXCLUSIVE: Oscar winning Up composer Michael Giacchino will be making his big screen directing debut with a brand new reboot of the 1954 sci-fi man-eating monster movie Them! at Warner Bros.

Giacchino is currently meeting with writers in hopes of getting the production up quite soon.

In the original Gordon Douglas directed film, which was also a Warner Bros. release, a huge nest of irradiated ants are discovered in the New Mexico desert and become a national threat when two young queen ants and their consorts escape to set-up new nests. The national search that ensues culminates in a battle in spillways and storm drains of Los Angeles.

“There’s always a movie in your mind that never leaves your head,” Giacchino tells Deadline, “For me, that’s Them! It wasn’t until much later in life until I learned what it was about — the nuclear age.”

“What I love about Them! is exactly what it’s called: Them!,” he adds, “It’s about the other, the unknown which one refuses or can’t understand.”

“The current version of Them! is about immigration, and to tell a story about the subject through a lens of this insane science fiction monster movie,” teases Giacchino about what his early vision is for the pic.

The composer of big franchise films such as Spider-Man: No Way Home, Star Trek, The Batman, Rogue One: A Star Wars Story and more has been looking to make tentpoles of his own for quite some time. Last year he directed the Marvel Studios/Disney+ special Werewolf by Night which follows a lycanthrope superhero who fights evil using the abilities given to him by a curse brought on by his bloodline. Giacchino also previously helmed the short Monster Challenge and an episode of Paramount+’s Star Trek: Short Treks.

The Giacchino brothers made movies as kids around their Edgewater Park Township, NJ home. Michael would direct, and Anthony would star along with their neighborhood friends. Michael Giacchino worked side jobs as a teenager to save up to buy film stock. He used an exacto knife to make scratches on the film strips in order to make laser and spark special effects. He graduated from the School of Visual Arts in NYC where he studied filmmaking and later held jobs at Universal marketing and Disney publicity. Eventually he segued to composing for videogames, one highlight being the Playstation game of Jurassic Park: The Lost World which Steven Spielberg personally hired him on. It was through videogames that J.J. Abrams came to know Giacchino and hired him to compose for his TV series Alias and Lost as well as big pics Star Trek, Star Trek Into Darkness, and Mission: Impossible III. After delivering music to the highest grossing movie in the pandemic, Spider-Man: No Way Home ($1.9 billion), Giacchino had four tentpole scores last year in Jurassic World: Dominion, Pixar’s Lightyear, Thor: Love & Thunder and The Batman.

“Michael Giacchino is a unique talent. We’re excited to be working with him and have him at the studio,” said Warner Bros Pictures President of Production and Development Jesse Ehrman who is overseeing the project on the Burbank, CA lot. Ehrman caught Giacchino’s Werewolf by Night on Disney+ and was blown away.

Giacchino is repped by CAA and Gorfaine/Schwartz.

‘Aarya’: Watch Teaser For Disney+ Hotstar’s Hit Indian Mafia Drama As Cameras Roll On Season 3
Gothic black French nails are trending as the emo alternative to Vanilla Girl manicures
‘I was not given a realistic chance’, says Liz Truss, as she makes comeback
No 10 admits ‘very difficult’ day ahead as hundreds of thousands of workers go on strike
Sugar Ray Leonard Signs With Artists First