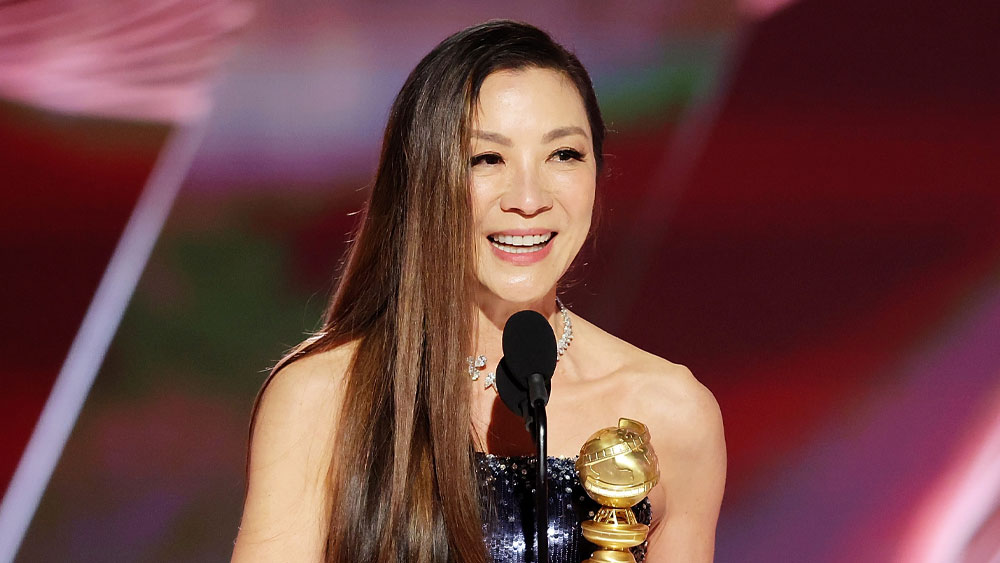 Michelle Yeoh was a winner at the Golden Globes on Tuesday when she became the recipient of the trophy for Best Actress in a Motion Picture – Musical or Comedy for her work on Everything Everywhere All at Once.

The star took the stage at the Beverly Hilton and recalled her journey to Hollywood. After receiving the trophy onstage from presenter Ana de Armas, Yeoh said, “I’m just gonna stand here and take this all in. Forty years, not letting go of this.”

“It’s been an amazing journey and incredible fight to be here today, but I think it’s been worth it,” she said. “I remember when I first came to Hollywood, it was a dream come true until I got here. Because, look at this face, I came here and was told, ‘You’re a minority.’ And I’m like, ‘No, that’s not possible.’”

Yeoh continued, “And then someone said to me, ‘You speak English.’ I mean, forget about them not knowing Korea, Japan, Malaysia, Asia, India… And then I said, ‘Yeah, the flight here was about 13 hours long, so, I learned.’”

The actor said that she turned 60 years old last year and noted that “as the days, the years and the numbers get bigger, it seems like opportunities start to get smaller as well.”

Yeoh said she was about to give up after having “had a really, really good run” working with Steven Spielberg, James Cameron and Danny Boyle, “then along came the best gift — Everything Everywhere All at Once.”

The music started playing signaling she had to wrap up her speech and Yeoh clapped back saying, “Shut up, please. I can beat you up, OK? And that’s serious.”

Yeoh thanked directors Daniel Kwan and Daniel Scheinert for having “the courage to write about a very ordinary immigrant, aging woman, mother, daughter…”

“I was given this gift of playing a woman who resonated so deeply with me and with so many people because at the end of the day, in whatever universe she was, she was just fighting, fighting for love, for her family,” she said.

Yeoh ended her speech by dedicating the award to “all the shoulders I stand on, all who came before me, who looks like me, and all who are going on this journey with me forward.”