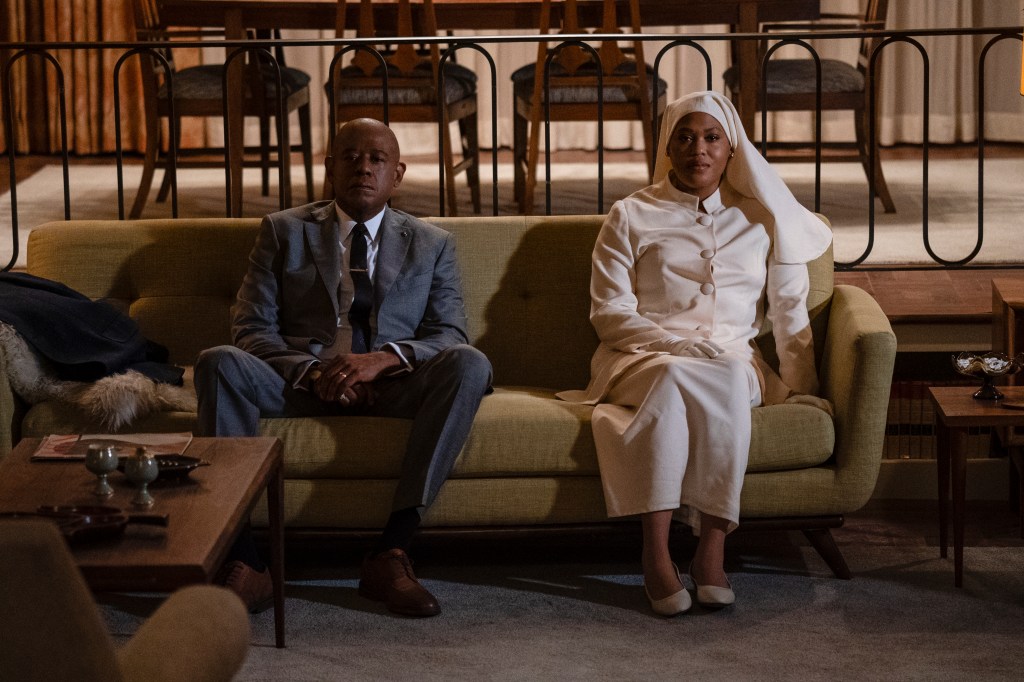 Michael Wright is hoping to breathe new life into the lion with the launch of MGM+.

He is leading the charge to rebrand Epix on January 15 with significant backing from new owner Amazon and a mandate to order more original series so that it can have a slate of new shows on air every week of the year.

This will include some existing favorites such as Godfather of Harlem, starring Forest Whitaker, and sci-fi horror series From, as well as some new series such as Hotel Cocaine from Narcos’ Chris Brancato and a follow-up to Julian Fellowes’ Belgravia, as well as potentially new seasons of shows such as Condor and Chapelwaite.

Not to mention a move into the Marvel Cinematic Universe with Silk: Spider Society.

Wright struck a new deal in November to become Head of MGM+, eschewing his previous double role as he was also President of MGM Scripted Television, with the studio side of the job going to Lindsay Sloane.

He told Deadline that the rebranding effort started three years ago, long before MGM was a twinkle in Amazon’s servers.

He said that the service, which is both a linear network and streaming destination, needed to distinguish itself as the world of peak TV continued to grow.

“If you’re not Netflix or Amazon, not so big that you can’t be all things to people, the path to success in this business for the rest of us is to identify the customer market, and say ‘that’s my core audience’. If you don’t have core audience, you’re wandering around blind in the forest,” he said.

This audience, which is around 60% male skewing, is essentially made up of slightly older, affluent, relatively sophisticated viewers that want to watch studio quality, adult contemporary movies, Wright says.

“Epix meant nothing [as a brand] but we were slowly crafting what we felt was a viable service. It has a couple thousand hours of movies. It had three original series five years ago and we’ve got 40 now so we’ve built it into what we used to call a premium network. It’s very thoughtfully curated to this target audience,” he added. “But the awareness was like 2% and there just wasn’t there sufficient resources to overcome that.”

Enter Amazon. Praising Mike Hopkins and Jen Salke, Wright says MGM+ now has a level of support that MGM was unable to previously offer. It also has the Prime Video Channels service, which is an important driver of subscribers.

“My hope is that we’re marketing this thing for the first time right now and we’ve given it a name that actually resonates with consumers so we’ve probably got a good shot of getting people to at least do a seven day free trial. Here’s the magic: they’re not coming in the door to a brand new store with empty shelves. There’s a whole lot here,” he added.

On the programming side, Wright would like to get to a point of three to four new series per year. “There is sort of a Goldilocks zone. I don’t know what it is but we haven’t had enough. You can add subs and get attention but then you’d hit a patch where you didn’t have anything on and Amazon has allowed us to run 52 weeks a year of consistently on brand content,” he said.

One of the most high-profile shows that will be part of this is Spider-Man spinoff series Silk: Spider Society, with The Walking Dead’s Angela Kang set as showrunner.

The series follows Cindy Moon, a Korean-American woman bitten by the same spider that bit Peter Parker, as she escapes imprisonment and searches for her missing family on her way to becoming the superhero known as Silk.

It will have its first window in the U.S. on MGM+, as part of a somewhat complex deal.

“I’m thrilled to have it,” said Wright. “Are you kidding me? To get to have the Spider-verse on our service, that’s great.”

The service also launches with Top Gun: Maverick, which is also streaming on Paramount+, as part of a movie licensing deal with Paramount.

There’s also some hope for fans of Condor and Chapelwaite.

Condor, which is inspired by Three Days of the Condor, originally aired on DirecTV’s Audience Network before moving to Epix. Wright says that a third season of the series, which stars Max Irons, is in development. “It’s not picked up yet. I don’t want to give anybody on the show false hopes. But it’s definitely a show that is in development and is in our consideration. We loved it.”

Similarly, Chapelwaite, a horror series based on Stephen King’s short story Jerusalem’s Lot starring Adrien Brody, was renewed for a second season in February 2022. Wright says that they’re in the weeds on season two at the moment.

The company also recently unveiled a larger-than-usual development pipeline including an adaptation of The Emperor of Ocean Park from John Wells, Earth Abides, based on a George R. Stewart book, Ark, based on Stephen Baxter’s books, Kevin Kline comedy American Classic and a TV series based on Hoodlum, the 1997 movie starring Laurence Fishburne, Tim Roth and Andy Garcia.

The latter is one of a number of MGM movie titles that could be adapted for the small-screen. Wright said that that’s the “backbone of our development” but admitted that MGM remakes will be shared amongst Amazon Prime Video, Freevee and the features division.

Wright is also keen on more adaptations of Ben Macintyre books following the success of Rogue Heroes and limited series A Spy Among Friends starring Damian Lewis and Guy Pearce, which launches on March 12.

Mcintyre has written books including Operation Mincemeat, For Your Eyes Only: Ian Fleming and James Bond, The Spy and the Traitor and Double Cross: The True Story of the D-Day Spies.

“There are other Ben Mcintyre books that should be made. That’s my brand,” he added.

Wright is now looking for his next gem: a big, romantic epic in the vein of David Lean’s Doctor Zhivago, which starred Omar Sharif and Julie Christie. “Where’s our big romantic adventures. Our audience would love that.”

Doctor Zhivago is an MGM title so don’t count out a remake.

‘BTS: Yet To Come’ Sings Green On Screen – Specialty Box Office
Our True Crime Obsession Is Fuelling My Anxiety
Lionsgate’s Adele Lim Comedy Gets Title, First-Look Photo
75 See Through Dresses: Celebrities In Sheer Dresses
Charlie Thomas Dies: Rock And Roll Hall Of Famer With The Drifters For 60 Years Was 85