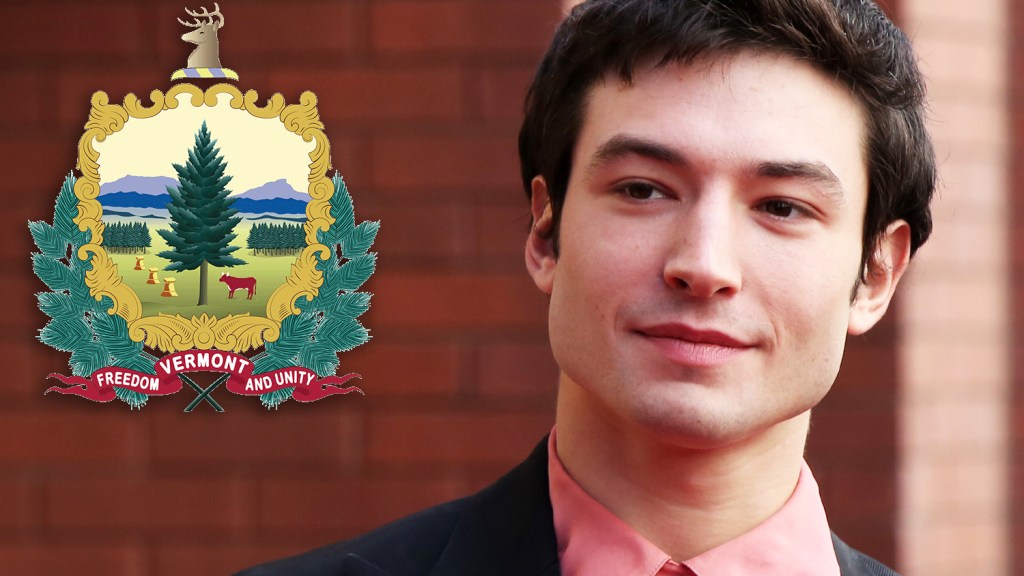 Refresh for more After being charged for stealing liquor from a Vermont neighbor back in May, Ezra Miller’s plea deal for a reduced sentence of trespassing was accepted by a Superior Court judge in the Green Mountain state.

In addition to paying $500, Miller will also need to serve one-year on administrative probation.

“The court will impose the sentence here….we accepted your plea of guilty. We will impose the fine here $500, and the sentence of 80-90 days which is all suspended with probation. The term of probation will be one year,” Superior Court Judge Kerry A. McDonald-Cady told the black suit-clad actor who appeared in the Bennington, VT court today.

“As part of the plea agreement here the state will dismiss without prejudice counts 1 and 2, of the burglary and petit larceny,” added McDonald-Cady.

“You’ll be on administrative probation for one year for the unlawful trespass that you’ll be pleading guilty to. If you complete that probation successfully and the probation is closed and discharged, count 1 will remain dismissed,” McDonald-Cady told the non-binary Miller who was addressed as ‘Mx Miller’ this morning. “However, if there’s a violation of probation that was filed that a court found probable cause for, the state could refile the count 1 burglary.”

“Ezra Miller pled guilty this morning to a misdemeanor unlawful trespass in Vermont Superior Court and accepted the conditions imposed by the court. Ezra would like to thank the court and the community for their trust and patience throughout this process, and would once again like to acknowledge the love and support they have received from their family and friends, who continue to be a vital presence in their ongoing mental health,” said the actor’s attorney Lisa B. Shelkrot, Esq. of Langrock, Sperry & Wool.

The Flash star was originally charged with three counts of burglary, petit larceny and trespassing in a May 1 incident that involved Miller breaking into Stamford, VT neighbor Isaac Winokur’s pantry in which he lifted a bottle of gin, vodka and rum. Vermont State Police didn’t locate Miller to issue a citation until Aug. 7.

“The conditions are about mental health, substance free living and no contact with Mr. Winokur,” McDonald-Cady told Miller.

Miller must register with the department of corrections in Vermont, notify the probation officer of their current address each month and notify probation within 72 hours if probable cause is found for a new criminal offense during term of probation. Miller can’t drink alcohol beverages to the extent that it interferes with their employment, the welfare of the actor’s family, or their self or any other person per the judge. The actor will have to submit to breath alcohol tests per request of their probation officer. Miller will also have to let the probation officer know the location of their job and employment.

Vermont Deputy State Attorney Alexander Burke of the Bennington State Attorney’s Office said at the top of the child that Winokur “is in support of this resolution. It protects his privacy interest without having to go forward with trial as well insures continued mental health treatment for the defendant. It essentially acts as a deferred sentence on the felony matter, which was the design of the agreement which will continue to allow the defendant to engage in his employment that they choose to engage in. “

The crime was one of several tabloid incidents in 2022 for the Fantastic Beasts star including a Reykjavik, Iceland altercation with a female bar patron, disorderly conduct at a Hawaiian karaoke bar, as well as a second-degree assault charge for throwing a chair at a 26-year old woman during a private gathering. In addition there was a restraining order issued by a 12 year old and their mother in Greenfield, MA as well as a protection order filed against Miller by the parents of 18-year-old Tokata Iron Eyes for grooming and brainwashing their daughter as a minor.

In the wake of the scandals, Miller issued a statement in August, saying “having recently gone through a time of intense crisis, I now understand that I am suffering complex mental health issues and have begun ongoing treatment.”

“I want to apologize to everyone that I have alarmed and upset with my past behavior,” they added. “I am committed to doing the necessary work to get back to a healthy, safe and productive stage in my life.”

This came at a time when the actor met with Warner Bros motion picture bosses Michael De Luca and Pam Abdy last summer to apologize for their incidents.

And in wrapping up today’s hearing McDonald-Cady sent The Flash star on their way: “And Mx miller, good luck to you.”

Miller returns to the big screen this summer on June 16 in Warner Bros/DC’s long-pandemic delayed The Flash.