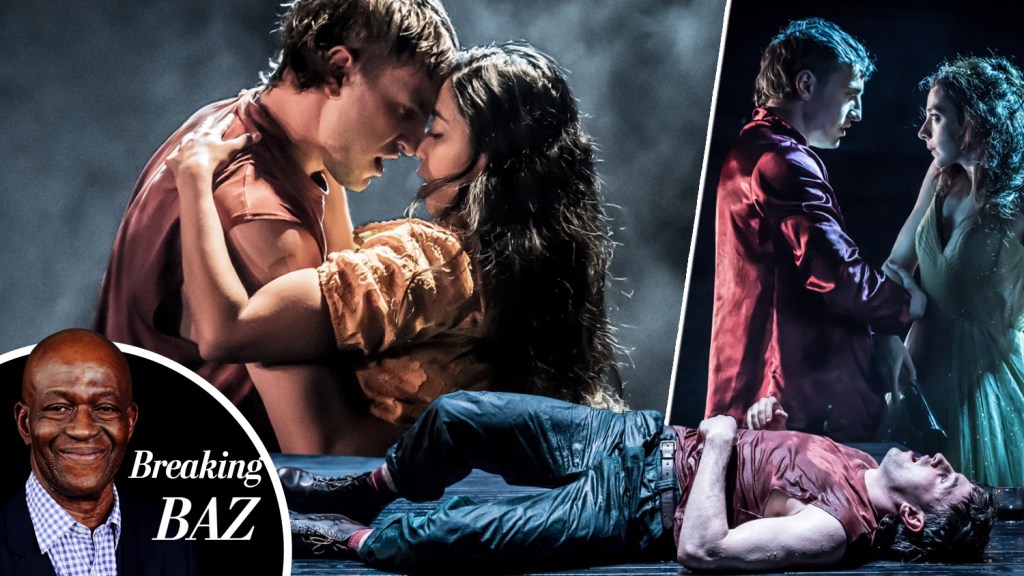 Paul Mescal freely admits that Stanley Kowalski is a wife beater and a rapist. The star of indie favorite Aftersun says he has “a lot of sympathy for him because that’s my job” — Mescal is playing the brutal antagonist in a revival of Tennessee Williams’ A Streetcar Named Desire at London’s Almeida Theatre.

Mescal describes Stanley as “smart, charming, dynamic and brutal,” adding that “there are parts of him that I would like being around,” though he’s well aware that Kowalski could “explode” at any moment.

In a production directed by Rebecca Frecknall, the revival is electrifying.

Mescal is brilliant as the thuggish war vet, really an animal in a T-shirt. He’s put out of shape when Blanche, his sister-in-law, camps out at the small apartment in New Orleans he shares with wife Stella, played well by Anjana Vasan (We Are Lady Parts).

“It’s my job to see him as somebody who is being encroached upon,” Mescal says.

And it’s Patsy Ferran (Living) who does the encroaching as Blanche.

In fact, both are animalistic, clawing at each other for their own spot of territory.

It certainly shakes away the winter blues to already have seen two of the year’s best stage performances before the end of January. It’s all the more remarkable when you consider that Ferran landed Blanche after the show had been in rehearsals for a few weeks with Lydia Wilson in the role. Wilson had to withdraw due to ill health.

Mescal says that he likes Stanley’s public persona. “There’s a coarseness to him which I think could be funny,” he says. “I think he’s somebody who draws you to him — and explodes, like he’s unpredictable.”

It’s clear that Mescal is the real deal. Not just because of the success of Aftersun, God’s Creatures, Normal People and all the rest.

It says a lot about him as an artist that he spent three years discussing doing the play with Frecknall (Cabaret), ensuring that time was found in his busy filming schedule to tread the boards at the Almeida.

I walked by the Almeida a couple of nights after the play opened (to rapturous notices) to find a line of hopefuls waiting for ticket returns. Every one of the Almeida’s 370 seats was spoken for that day.

You cannot get a ticket to see Streetcar for love or money. Unless you know Mescal really well. Like really well because he has access to two house seats a night. But populations of whole towns in England and his native Ireland have been after him for seats.

Mescal laughs and wonders if he hadn’t playing the title role in The Phantom of the Opera at age 16 whether he’d be in the profession today. “That was life-changing,” he says.

He’s enjoying theater because he loves “the routine of it.”

He continues: “I love the kind of fact that you can really immerse yourself in the rhythm of the play; you’re not kind of stopping for a lens of the cameras to turn around or sit around all day and night. You do the play and it’s different every single time, even though you speak the same lines. The audience is different, everything is slightly different every night.”

Today was different because he received a best actor BAFTA nomination.

BAFTA AND DISCUSSIONS ON GENDER NEUTRALITY

Both BAFTA CEO Jane Millichip and the organization’s chair, Krishnendu Mahjmdar, confirmed that they are having industry-wide discussions about the possibility of implementing gender-neutral awards.

But “as you can see, we haven’t reached that stage this year,” Millichip tells me.

“It’s an ongoing discussion,” Mahjmdar adds during a separate conversation.

Millichip noted that conversations have been ongoing for some time, long, long before filmmaker Sam Mendes observed that gender neutrality one day would become “inevitable” when he was asked about comments made by Emma Corrin. They had noted that it’s already about time.

“We are in the throes of conversations with industry experts, stakeholders and membership peers,” Millichip explained. “It’s a complex discussion to be had, and we are in that process. We are taking the subject very seriously. And consulting at length on it.”

Millichip said she was pleased with the “good balance” in this year’s crop of nominees and practically jumping with joy at the 11 female directors who cropped up in various categories. She noted the lineup in the Debut by a British Writer, Director or Producer category.

Plus, she liked the balance of commercial and indie pictures in this year’s mix, citing All Quiet on the Western Front, The Banshees of Inisherin, Elvis, Everything, Everywhere All at Once and Tár.

The exec said that, from her understanding, BAFTA members are watching more movies because of recent shifts in the viewing process. “Initially, that was really to address unconscious bias and level the playing fields but I think, and I don’t have the empirical data to prove this, I think our members are viewing more films out of their personal creative preference than they might otherwise do.”

She sees diversity not only in representation but narrative style, mood, tone and size of the movie. “It represents the full gamut of films being made,” Millichip told me.

I wondered, however, what on earth happened to Sarah Polley’s film Women Talking, featuring an ensemble that includes Claire Foy, Jessie Buckley, Rooney Mara, Frances McDormand and Ben Whishaw. It began the season as one of the best-reviewed films, yet it hasn’t connected with audiences, in the States at least.

I wonder if the lack of love for Women Talking by the BAFTA membership and others has something to do with its marketing campaign both here and in the U.S., which seems to suggest that it’s not a film everyone should see. Whereas I think it’s essential viewing.

I was riveted by the film when I saw it at Telluride and again at the BFI London Film Festival, yet a few other blokes who’ve seen it disliked it because the women didn’t stop talking, one said. That’s the darn point, I responded.

Anyhow, both Millichip and Anna Higgs, chair of BAFTAs film committee said that representation of female-led stories is something they need to keep pushing on.

But I’m thrilled there have been hugs from BAFTA for The Woman King, Till, All Quiet on the Western Front, Living, Elvis and several other pictures. I’m particularly fond of Sam Mendes’ film Empire of Light, which took me right back to my own youth growing up in London, where I often had to seek a home from home at the local cinemas watching endless movies.

By the way, the BAFTA nominations launch was tastefully done. I thought Hayley Atwell (Avengers: Endgame) and Toheeb Jimoh (Ted Lasso) were calm and collected with just the right balance of humor and gravitas.

I used to enjoy covering the hyped-up early-morning Oscar nomination announcements because of the sheer level of overwhelming excitement if one heard a favorite actor or filmmaker being named. But I can’t say they were fun.

The BAFTA noms were, though. “We’ve got tea and smoked salmon, darling,” Millichip cooed.

“And it’s at a sensible hour, darling.”

AMY WINEHOUSE … AND HER CATS!

For about 18 months, or maybe it was more like two years, the singer Amy Winehouse lived two houses just a hop and a skip away from us when we lived in Camden Town, North London (we’re EastEnders now).

It was a rented house, quite stylish, externally anyway. The poor owners had spent a fortune doing it up.

Winehouse resided in an apartment at the other end of our cobbled street before moving much closer.

Her dad Mitch, a licensed taxi driver, used to pick her up and drop her off at all hours of the day and night. On a few occasions there’d be hundreds of fans, paparazzi, nosy neighbors and cops squeezed into this Camden backwater that was supposed to be lovely and quiet, yeah right.

Actually, Amy did us a favor.

Druggies favored our street because there were quite a few prickly shrubs planted outside several properties. Apparently, narcotics, of what kind I have no clue, were deposited in these plants where they’d be picked up by the buyers, presumably.

It used to drive me nuts because when drugs were being retrieved late at night or in the early hours, our dogs would bark and wake us up.

However, for two years no dope was left hidden in the prickly bush, for which we were grateful.

But the Amy circus was something else.

However, we all felt protective toward her. My son sometimes would go to the house and “hang out.” I’ve never fathomed what kind of hanging out was involved. There were cats in the house, and he helped feed them. Another neighbor helped clean up after the cats.

I was reminded of all this as I walked from my office to get a haircut only to find the street off of Old Compton Street roped off while Sam Taylor-Johnson was shooting a scene from Back to Black, a movie about the life and music of Amy Winehouse.

Marisa Abela (Industry) as Amy and Eddie Marsan (Fast & Furious Presents: Hobbs & Shaw) playing Mitch were shooting scenes at the Bar Italia and Ronnie Scott’s jazz club. I knew very well what was shooting, but I asked the security and assistants what the movie was. “It’s a butter commercial,” one told me.

OK, which brand of butter?

“I’m not allowed to say, but if I whisper it then, don’t spread it around,” came the witty response.

Sitting in the chair in Cuts, I hear someone shout “Chop it all off…”

It was Marsan having a little jolly jape.

More than half of all ‘Avatar: The Way of Water’ tickets have been for 3D showings
Jeff Tweedy Announces New Book World Within a Song: Music That Changed My Life and Life That Changed My Music
Ticketmaster braces for Beyoncé’s ‘Renaissance’ tour amid fears of Taylor Swift-level demand
Actors’ Equity Is Expanding Its Membership; Makes Open Access Program Permanent
Grammys TV Review: Beyoncé Makes Winning History; Music’s Big Night Gets A Lot Of Its Beat Back With Hip Hop Celebrations & Mixtape Of A CBS Show