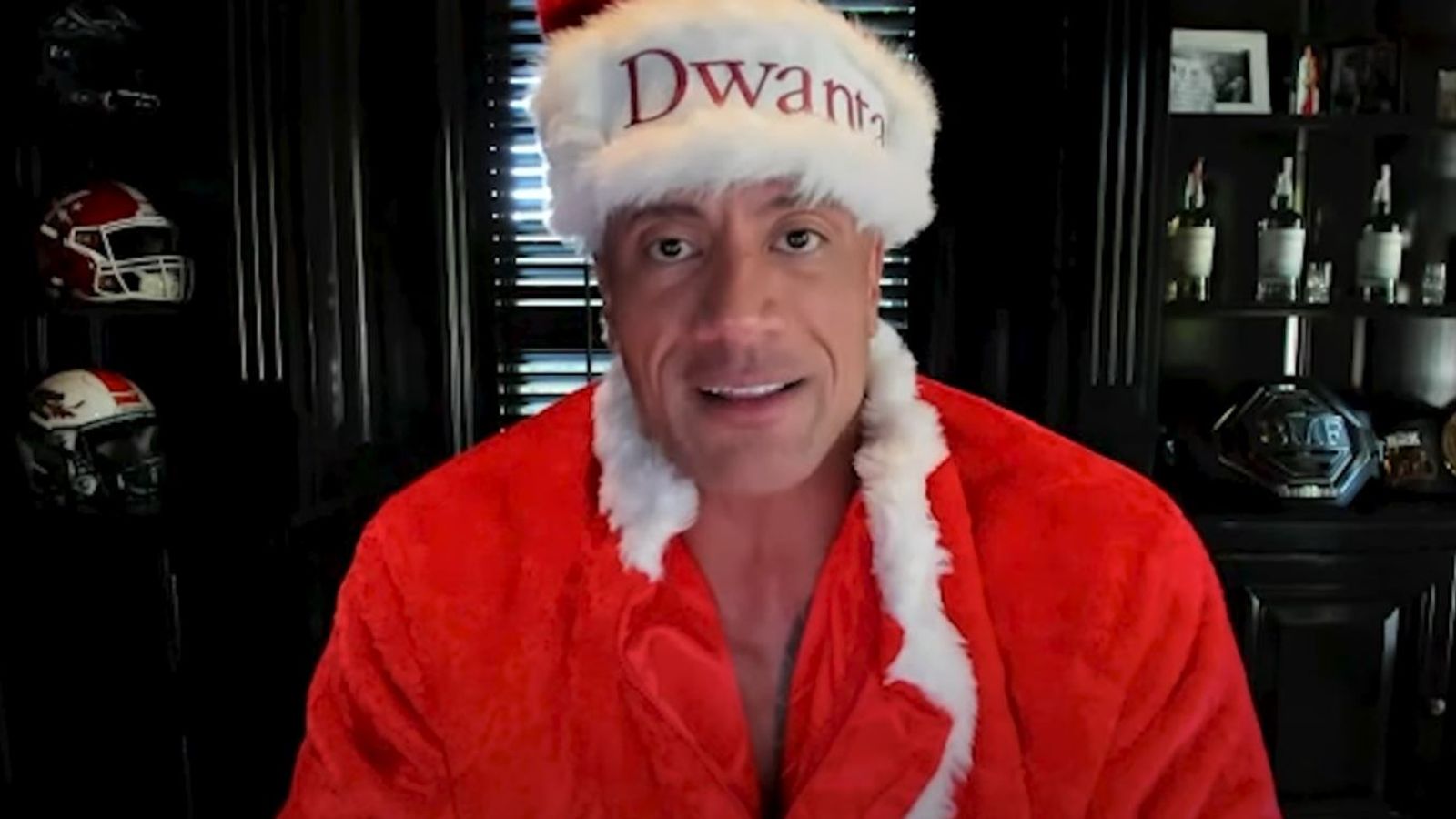 Wrestler, Hollywood actor – and now Santa Claus. Is there nothing Dwayne Johnson cannot do?

The Rock has helped out a widowed father-of-two who was struggling to buy Christmas presents for his children, donning a festive red suit and a “Dwanta” hat to spread some festive cheer during a surprise virtual meeting.

It came about as comic fan and “super dad” Jay Abel appeared on actor John Krasinski’s YouTube series, Some Good News, after the star learned he was selling off some of his favourite memorabilia to raise money for gifts.

Mr Abel lost his wife three years ago and said he had been finding it difficult to find work during the COVID pandemic, but was determined to give his young son and daughter a nice Christmas. He said he wasn’t doing anything “special” by selling his collectors items, but was simply trying to be a good dad.

Krasinski said he had tried to buy some of the memorabilia himself – but was banned as Mr Abel had thought he was a fraudulent buyer. So the host turned to Johnson to help out.

Mr Abel had previously contacted The Rock asking for a simple retweet for his eBay appeal. But the star said he could do better than that.

“Well, the truth is, I saw your tweet and your tweet really, really moved me,” Johnson told the shocked father.

He continued: “I want you to take all of your stuff off of eBay because Dwanta Claus is going to take care of all of that stuff.”

But he wasn’t done there.

“I also want your kids to know what kind of father they have. So, I hear that you like comics…”

You’re this kind of dad and a retweet is all you want?
I have a little bit more in mind for you. Stay ready.
You’re a good man, Jay.
We need more like you.
~ Dwanta Claus 🎅🏾🥃 https://t.co/EfZIGt77RA

The actor then asked Mr Abel if he liked Black Adam – the character Johnson is set to play in an upcoming film.

“Just a smidge,” he replied.

“So when this whole thing is done and when it’s safe, I want you to come down to Southern California and I want you to visit us at the DC Universe and we’ll show you around, give you a whole bunch of cool DC swag,” the Rock said. “But! It ain’t done there, either.

“Because I know that you’re a big collector of comic book memorabilia, I got a little something special cooking up for you. I’m going to take the script, my script, my official Black Adam script, the one that I will work on every day, that I’m working on now, from beginning of production to the end of production.

Mr Abel said he was speechless and that just talking to the star was “an awesome present”.

“Well Jay, I got to tell you, you deserve it all, man,” Johnson replied. “Your story is an inspiration.

“You are an inspiration, not only to myself, to Dwanta Claus, but certainly to John, certainly to everybody who hears your story. You inspire so many people because the truth is you represent so many parents around the world who are going through the struggle this Christmas.”

The star then revealed that their “elf friends” at FedEx would also be donating $5 million to the Toys For Tots charity after being inspired by Mr Abel’s story.

“That is the best present I have ever heard,” the delighted father replied, before joking: “Other than your script.”

“You are what the holidays are all about,” Krasinski told him.

This Christmas is going to be very different for everyone around the world – but Dwanta Claus is giving us the festive cheer we need.