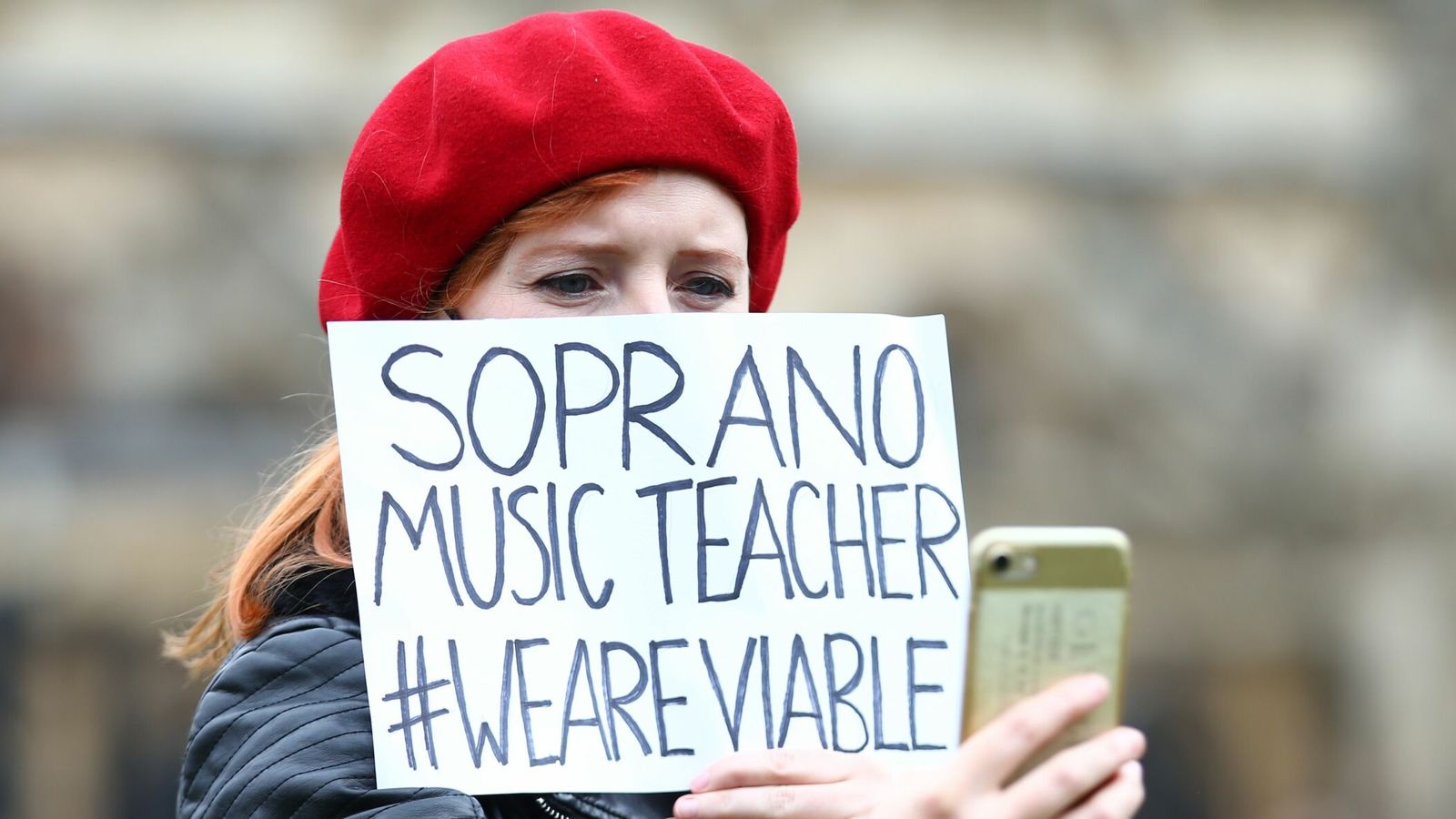 “I don’t even know if I’ve been able to compute how it makes me feel, the fact that our industry is at a complete standstill… 170,000 people out of work, it seems to be completely undigestible to me.”

Katie Melua’s words have lingered with me for weeks since interviewing her in an eerily empty Royal Albert Hall for the joint Sky Arts and Sky News documentary Culture Interrupted.

But as disappointing as this year has been for well-known artists made impotent by COVID-19, with live music revenue down 81% because of the pandemic, they will most likely be able to weather this storm.

However, for fledgling talent – attempting to break onto the scene this year – that’s not the case.

And it’s that absence of cultural moments throughout 2020 – the ones that shape us all – that raises a legacy of the pandemic which is so much trickier to quantify.

I will always remember seeing David Bowie at Glastonbury in 2000. Just as the Thursday nights I spent dancing to Blur, Oasis and the Charlatans in Rock City in Nottingham as a teenager still remain with me 25 years later.

More recently, seeing the Lord Of The Rings films at the cinema with my parents became an annual pilgrimage and taking my children to see The Gruffalo or Peter Pan at the National Theatre or Tom Fletcher’s Christmasaurus have begun new family traditions.

This isn’t about highbrow or lowbrow. Whether your annual cultural highlight is the Proms In The Park or Glyndebourne, or trip to your local cinema or local pub with a very average band just having a go.

If we lose these experiences and places, we lose something of the very thing that makes us human. It sounds dramatic, but the pandemic has left a void in so many ways.

As Melanie C so beautifully put it: “Something out of your control happens and it’s gone”. That’s a sentiment I’m sure everyone can relate to on one level or another.

Speaking to me in a criminally quiet Wembley Stadium where she played with the Spice Girls just last year, she encapsulates that feeling of loss which has affected so many of us, not just performers.

“To have a period of life where you can’t go, you can’t enjoy music, you can’t share that experience not only as an artist, with your fans, but as a music fan with the artists that you love.

“I think it makes me feel like there is this big gap, this big hole that is being created in my lifetime.

“What if it [the pandemic] happened in the ’90s… I don’t know what would have happened to the Spice Girls. Would we still have had the same journey? Would pop culture still have the same history?”

There is some irony that at the beginning of this crisis, it was music that brought us all together.

We all watched the One World Together At Home Concert by Global Citizen in April, which brought some of the biggest names in music – Lady Gaga, Paul McCartney, Elton John, Stevie Wonder – into our homes, performing from theirs.

Countless artists from Andrew Lloyd Webber to Chris Martin performed live streams from their sofas in an attempt to lift our spirits and in tribute to NHS staff and frontline workers.

As Blur and Gorillaz icon Damon Albarn explains in the documentary: “Music brings people together… It’s really important that music keeps and maintains its vitality because we know how much it nourishes our soul”.

Composer and music legend Nitin Sawhney echoes his words: “Everyone needs the arts. Everyone needs music, especially at times when everything feels so bleak.

“Culture and the arts and music, it’s the spirit of this country. This is the soul of this country. You can’t just suddenly say, ‘Well, you know, don’t worry about that. That’s gone. Now, let’s retrain everyone.'”

Sawhney hits on the palpable anger at the government which appears to have been felt by the entire live entertainment sector.

In Culture Interrupted, DJ Sister Bliss is one of the most outspoken, perhaps because electronic music and clubs – hit particularly badly – is such a huge part of her identity and that of Faithless.

She describes the “contempt” with which she feels the government has shown her industry in this period: “The arts are just as important as a medicine or law business or the city or bankers, which they bailed out pretty quickly.”

During the documentary, Bliss is interviewed in an empty Alexandra Palace, where she has headlined with Faithless a number of times.

The weight of the venue’s emptiness is overpowering. Bliss adds: “We cannot watch culture just collapse around our ears.  It’s unimaginable.”

Sawhney makes a point that sums up the frustration felt in live music and theatre: “Looking at how the airline industry, for example, seating people right next to each other, which has been very confusing in terms of saying that’s been OK, but it’s not OK for people to be sitting next to each other in venues.”

The government has of course given a £1.57bn recovery fund for the arts which has been a lifeline for many venues and cultural institutions.

But Sister Bliss describes it as “a drop in the ocean” when the Royal Albert Hall alone “has lost £27m this year”.

Ally Wolf who runs the Clapham Grand continues to pay £50,000 in rent per month for the historic music venue – which has until now remained open for 120 years – but has been closed for much of 2020 because of coronavirus restrictions and when open the 30%-capacity rule stifles any prospect of turning a profit. “It’s insane,” says Wolf.

The line-up for this documentary hints at the generation from which I come, underlining the fact that generations are defined by culture and indeed their artists.

In the ’90s I discovered Damon Albarn (Song 2 was on repeat at the aforementioned Rock City), Melanie C (who else my age didn’t ever dance to Wannabe?), Tim Burgess (Melting Pot was on constantly in our student house in Leeds), Sister Bliss (I’ve seen Faithless more than any other band), Roisin Murphy (“Do you like my tight sweater” anyone?) and musician Nitin Sawhney were all kind enough to contribute to Culture Interrupted – largely because they were moved by the situation so many young artists are in.

But the hour-long documentary special also follows new artists – those whose names we may not yet know but would soon have been celebrating as 2020’s breakthrough acts.

We follow Eliza Shaddad a singer-songwriter based in Cornwall who was supposed to tour and support Keane this year.

As she sits on a rock on the beach, seemingly a million miles from where she was supposed to be this year (sleeping on a tour bus) she is understandably disappointed, but her overriding concerns seem to lie with her crew, her band, and the wider industry.

“Sometimes I’m just inconsolable about the state of the music industry,” she admits.

Kawala – a five-piece band from London – were excited to have their first big tour supporting Bombay Bicycle Club and play their first Glastonbury Festival.

But of course, none of it has happened.

“Arguably music is probably going to be the last thing to return,” says Kawala guitarist and vocalist Daniel McCarthy.

Kawala do all they can to play live streamed gigs and even attempted a distanced park tour of the UK, such is their desperation to let the show go on.

I don’t know what is worse. Shattered livelihoods and finances. Or shattered dreams.

“I think to put an industry in danger, an industry like this, what you’re actually doing is you’re going to kill jobs that people love doing,” says Roisin Murphy (of Moloko fame).

“You might as well kill a part of them… and kill a part of society. You know, kill people’s dreams. No, don’t do that,” adds the Sing it Back singer (who brought us some of the best live-streams from her living room in the first lockdown).

The “cost to the individual is incalculable” rock folk singer-songwriter Frank Turner explains. He has done weekly live streamed shows since the summer to raise hundreds of thousands of pounds for hundreds of small venues facing closure.

He warns: “The amount of skill and experience within people who work in the industry up to 200,000 people is incalculable… the people who work on my crew, for example, most of whom are now working in COVID test centres or in supermarkets, and I’ve done what I can to raise money for them in the meantime.

“But, you know, I can’t pay them a full-time wage right now because I can’t play shows. These people are leaving the industry – at the moment temporarily – but possibly permanently.”

The music industry is worth £5.8bn to the UK economy, generating 200,000 jobs, but half are now working in roles outside the sector according to the Musicians’ Union.

“There are so many jobs related to the live music industry and they’ve all gone,” says Emma Banks, music indie heavyweight and agent of artists such as Kylie and Raleigh Ritchie.

Because three-quarters of people in music are freelance, a third overall didn’t qualify for furlough or any financial support from the government, according to UK Music.

One professional trumpet player, Toby Coles, who has spent decades in the orchestras of some of the biggest West End shows such as Matilda and Wicked is currently working as a delivery driver.

While pragmatic and hopeful that by next summer he’ll be back to his profession, he admits it’s been a struggle. It’s a position most can relate to after this year.

“I speak openly about battles I’ve had with mental health,” Mel C admits.

“I found this year very, very challenging. There have definitely been days where I have no motivation. I really don’t want to do anything.”

Nitin Sawhney strikes a sombre note when he comments that coronavirus “has left a huge hole in the arts and I don’t know how long it’s going to take, if ever, for us to get back to any kind of normality”.

But the final word goes to Roisin Murphy, who gives us a hint of optimism: “The thing is music can never die. People will gather together and dance”.

Culture Interrupted airs on Sky Arts on Sunday 20 December at 7pm (Freeview channel 11), on Sky News on Christmas Eve at 9pm and on NOW TV and On Demand.