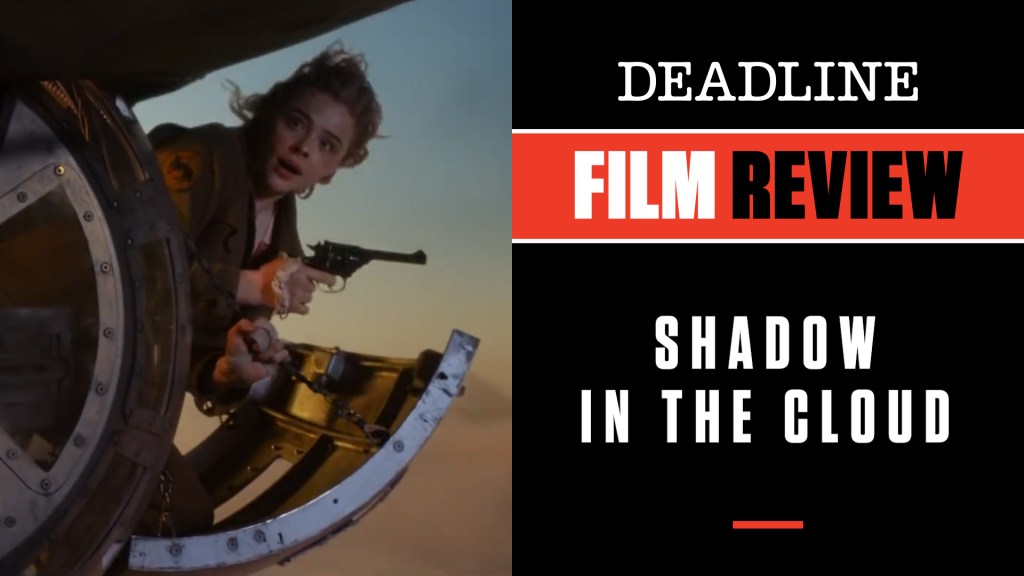 One of the sheer joys of this “virtual” film festival year was encountering Toronto’s Midnight Madness entry Shadow in the Cloud. A wholly bananas and raucous B-movie-style thrill ride pitting a kickass Chloë Grace Moretz versus monstrous gremlins and obnoxious male WWII colleagues, this blissfully over-the-top adventure brings the war movie up to date as the ladies — both in front of and behind the scenes — get their revenge on decades of basically cinematic invisibility in the genre. Boy, do they ever!

This might not be Oscar-ready stuff, but it’s more fun you likely will not have at the movies in 2021, and I say that well aware that this is actually the first official release of the new year. Shadow in the Cloud kicks it off on Day 1 in great style thanks to director Roseanne Liang, a real discovery, who clearly knows how to deliver a wild and unpredictable ride in the skies that will, if nothing else, put a much-needed smile on your face as we exit an awful year in hopes of a better one dawning.

Moretz plays Captain Maude Garrett, assigned to accompany some super-secret precious cargo sealed in a box aboard a 1943 B-17 bomber called “The Fool’s Errand.” It’s an appropriate name considering the all-male crew flying it sticks her alone in the turret underneath the plane, where she constantly hears their dopey sexual broadsides aimed at her presence — even though she proves she is a better shot than any of them when it comes to downing Japanese planes or eventually fighting a gremlin-like monster who first appears outside on the wing (!). That turns this World War II actioner into a bloody monster movie at about the halfway point, and Garrett then shows the right stuff indeed in some spectacular stunt work staged within and outside the aircraft. When I say this is one wild ride, I am not kidding, and Moretz, who was introduced to moviegoers in Kickass, proves she is still up to the task and more as a Ripley-type take-no-prisoners female character who has a real surprise on her hands that ratchets up the stakes here in jaw-dropping fashion.

The WETA CGI designed gremlin is first-rate as well, especially when you consider this is really a low-budget affair that triumphs with clever effects and stunts over the kind of pricey but predictable action set pieces we see in your basic Hollywood blockbuster. The whole idea of a gremlin turning up on aircraft was accomplished most famously in that classic “Nightmare at 20,000 Feet” episode of The Twilight Zone, starring a pre-Star Trek William Shatner, and later in the 1983 feature version. But this is no mere ripoff of that; rather, it’s a starting point for some bananas action that you ought to be strapped on to your couch for. This would be fun as hell on the big screen, but Vertical is going largely VOD on New Year’s Day rather than waiting for theaters to get back into full swing.

Liang, who shares a co-writing credit with Max Landis, who wrote the original draft (and whose father John Landis infamously directed that 1983 Twilight Zone feature), keeps it all tight as a drum — coming in at less than 90 minutes, with no room for fat. In a week where I have reviewed impressive feature debuts by women including Regina King’s One Night In Miami and Emerald Fennell’s Promising Young Woman, it is heartening to herald another fresh female face behind the camera who really has a strong voice in a genre previously dominated by men. Bravo. As for Moretz, she not only handles the demanding physicality of the role, she also adds some smarts and heart to it along the way. Nick Robinson, Beulah Koale, Callan Mulvey, Benedict Wall and Taylor John Smith comprise most of the male support, with the latter’s SSgt Quaid at least providing a modicum of sensitivity. This is a fun one.

Producers are Fred Berger, Tom Hern, Brian Kavanaugh-Jones, Kelly McCormick. Check out my video review with scenes from the movie at the link above.

Do you plan to see Shadow in the Cloud? Let us know what you think.

Joe Rainey, Nia Archives, Fievel Is Glauque, and More: This Week’s Pitchfork Selects Playlist
Delta is making it harder to get into its airport lounges after they were flooded by travelers
Elon Musk shows off updates to his brain chips and says he’s going to install one in himself when they are ready
Jackie Chan, Spike Lee, Nadine Labaki Head To Saudi Arabia’s Red Sea Fest For High-Profile In-Conversation Line-up
Walmart shooter bought pistol on the day of the attack and left behind a ‘death note’