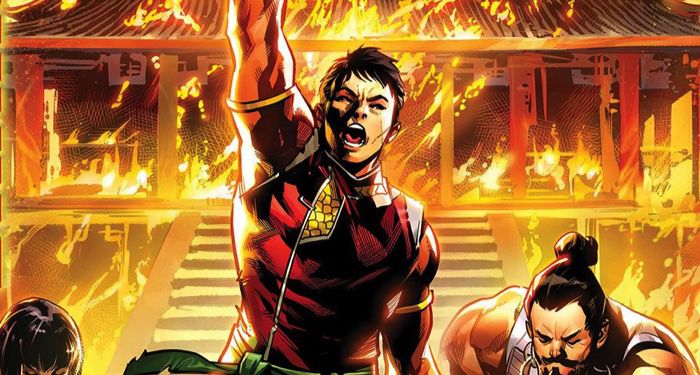 Between parent company Disney and its subsidiaries, including Lucasfilm and Marvel, approximately 80,000 announcements issued forth from the Investor Day meeting on December 11. Several of them, at least several of the ones I actually paid attention to, involved Marvel’s Shang-Chi and the Ten Rings, the company’s first film focusing on a Chinese hero and with a primarily Asian cast including: Simu Liu (Shang-Chi), Michelle Yeoh (Jiang Nan), and Meng’er Zhang (Xialing).

I’m also staring as the villain of the piece, Tony Leung, who has long been rumored to be Iron Man nemesis “The Mandarin.” Yes, you do remember correctly that a scenery-chewing version of the very same was played by Ben Kingsley in Iron Man 3. My understanding is that they’re going with a “he stole the name and put on an act and the real guy was very unhappy with him” explanation.

On the new cast…I guess it’s an infographic, however Leung isn’t listed as “The Mandarin.” He’s listed as “Wenwu” and in some of the articles I found online when I searched, “Wenwu Zhu.” Which means that instead of calling the character by an outdated, racist sobriquet in this, the 21st century, script writer David Callaham went ahead and gave him a whole as name.

Allow me to give you a brief history of Wenwu.

As was the case in the 1960s when men were men and women in comics were mostly fetishes, Wenwu was born to an English prostitute who worked in an opium den in Inner Mongolia (Marvel clearly had the same “throw a dart at a map of Asia” strategy as DC when it came to choosing story settings). After spending his childhood in forced labor, upon the death of his mother he killed her pimp/his dad and became a criminal, as one does, though the rise of Communism made him a fugitive (I would argue he was a fugitive before, but we can’t have Communism interfering with anything, even crime, now can we).

Wenwu found the wreckage of a spacecraft in a cave (sure, why not?), killed its already mostly dead surviving passenger, and stole ten cylinders he found spinning in the ships engine. Noting that they looked like rings, he started wearing them as such. All ten of them (see what I did there?). Each ring had a different power, granted by the warrior spirits that possessed them. Wenwu made it his life’s goal to free the spirits. He decided the best way to do so was to subjugate the villages around the cave and become a weapons runner, because enslaving folks always goes really well and so does selling bombs. Also telling people your descended from Genghis Khan. Apparently.

Wenwu hooked up with a fellow warlord and it was through him that he heard tell of one Tony Stark. That whole prisoner storyline from Iron Man actually happened in China in the comics with Wenwu as the mastermind, after which they did a big battle and then some more battles with and without the Avengers. Wenwu also helped Doctor Doom crash Sue Storm and Mister Fantastic’s wedding, which…listen, I’d make the argument he did her a favor ’cause girlfriend could have had Namor but whatever, no accounting for taste.

He and Iron Man go at it some more, then Wenwu tries to take over Russia (I mean, it’s there), dies, comes back, and then gets taken out by the Punisher.

We’ll have you all filled in by the time Shang-Chi premieres July 9, 2021. Happy birth month to me and congrats to Simu Liu on what he has dubbed on Twitter as his “hot girl summer.”