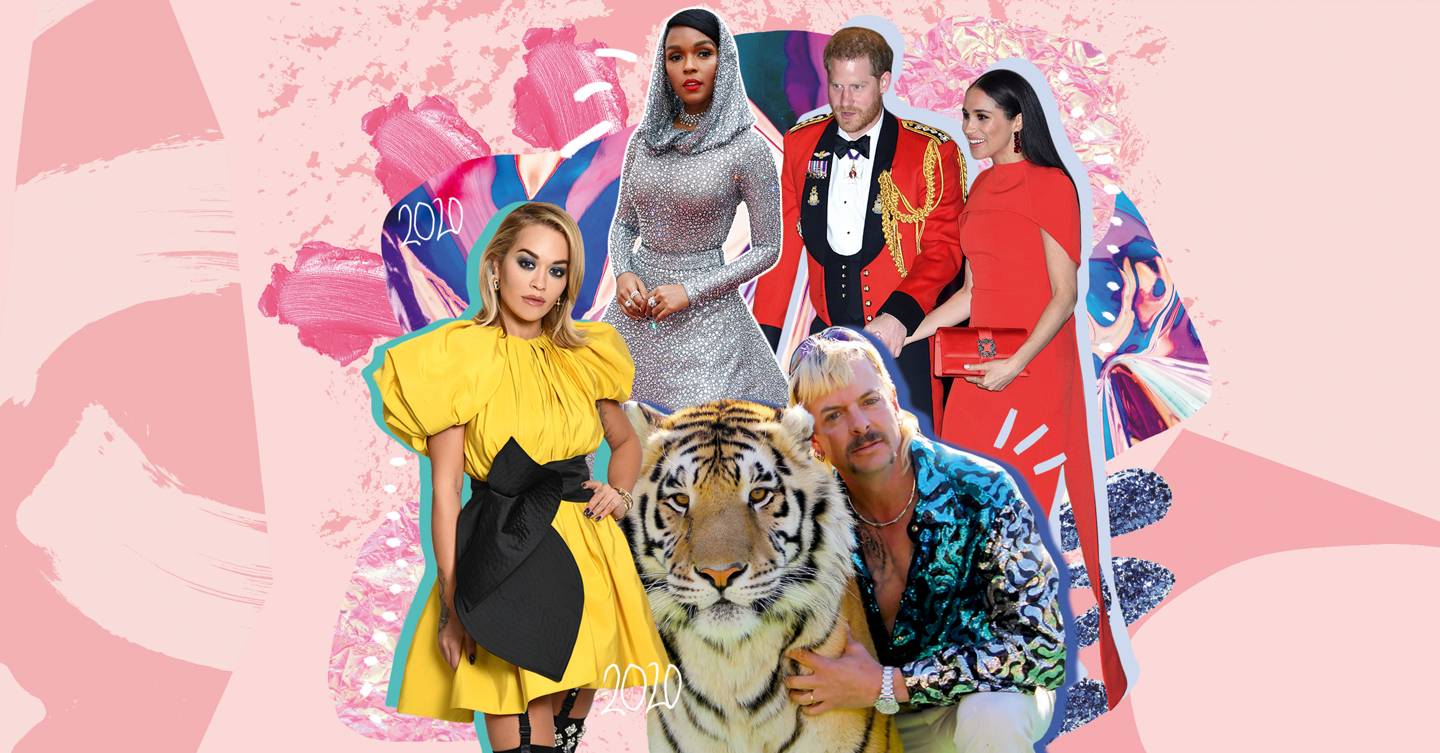 Here we are, at the end of a year that was, experts say, simultaneously both about half an hour and 25 years long. But while most of us lowered our bar for ‘success’ to include such feats as morning teeth-brushing and remembering to put on trousers for the postman, the year still delivered clear winners – such as overripe bananas, or anyone who bought shares in Zoom – and losers, such as the M or anyone who bought shares in Quibi.

So let’s revisit the biggest cultural triumphs and disasters of 2020, shall we? It’s been a year that none of us could have predicted, but at least we know how it all ends. In tiers.

Remember January? Nope me neither! But records suggest that back in those halcyon days, our biggest concerns were quaint things like BigBenBonggate and HarryandMegxit. Greta Gerwig’s Little Women was a winner for every bookish woman who has ever fancied herself “such a Jo, actually” (spoken like a true Meg with Amy rising), while the only face coverings worth talking about were on chaotic musical cheese dream, The Masked Singer. Even better, we were free to enjoy season two of the flawless Sex Education without yelling “TWO METRES APART” at the horny teens. But the month’s biggest winner has to be the randy grandmother on This Morning, who did sterling work for both KY Jelly and the Egyptian tourist board. You get yours, Iris.

While the BAFTAS’ sustainable dress code was a damp squib (re-wearing a tuxedo, Joaquin? Groundbreaking), awards season did bless us with Janelle Monae in floral garlands, Natalie Portman in a cape embroidered with names of female directors, and Brad Pitt and Jennifer Aniston in ‘hot exes can still hug’ shocker. Meanwhile Harry Styles’ patchwork cardigan was such a winner that fans promptly started crocheting their own on TikTok. In less cheerful news, people named Dennis across the country were dealt an extra blow when the storm of the same name hit our shores and caused widespread mayhem. “This might be the worst thing to happen in 2020!”, we said. “Could anything cause more disruption than this arseing storm?”, we said.

Well whaddya know. March’s biggest winner was the word ‘unprecedented’, which enjoyed a stratospheric rise once it had been collectively agreed that starting emails with “SHITTING HELL EH?” didn’t quite set the right tone. Runners-up included Jurgen Klopp and the Twitter thread that made us fancy him, the grimly fascinating world of Tiger King and the hairdressing PR I saw trying to spin a press release out of Joe Exotic’s mullet. The month’s most notable loser was celebrity culture – from Gal Gadot’s tone-deaf Imagine fiasco to Madonna calling Covid “the great equaliser” from a bathtub filled with rose petals. Also bras, as lockdown prompted what future historians will surely dub ‘The Great Unclasping’. Our tits came out of their cage, and they’ve been doing just fine.

April may have been, in the word of TS Eliot, the cruellest month – but that only made us more determined, in the words of Gemma Collins, to praise and celebrate life where we could. In the depths of lockdown, the only thing that made us thirstier than Stanley Tucci’s Negroni was Connell’s chain, which represented a combined win for positive masculinity, ‘intimacy coordinators’ and the iPlayer rewind button. But a loss for anyone who sat down to watch episode 11 of Normal People while isolating with their parents.

‘Nobody’s going to remember your Instagram following. It’s not going to be on your tombstone’: Paul Mescal on the trappings of social media & mental health

While ITV’s Quiz wins the ‘most timely plot about coughing’ award (undisputed victors being 2001 polonecks and Chris Tarrant’s teeth), it was another former army officer who hit the jackpot. Captain Sir Tom Moore, whose pledge to walk 100 laps of his garden before his hundredth birthday raised £32.8m for NHS charities and had emotionally fragile millennials across the land praying we wouldn’t be forced to cancel him for saying anything problematic. So far so good.

It’s a close call in a month where Elon Musk legit called his baby ‘X Æ A-Xii’, but May’s biggest loser has to be poor Barnard Castle, which has had to endure tourists posing for selfies outside the town’s branch of Specsavers in homage to Dominic Cummings and his 2020 vision ever since. It was a better month for Shewees and big, view-obstructing bushes though, as the weather warmed up and meeting friends outside became permissible again – the only question after a bottle of warm park rosé being: seriously though, where the hell can we pee? And although Eurovision was sadly cancelled and Iceland’s synth-pop banger ‘Think About Things’ robbed of its chance to shine, it’ll forever be the defacto winner for anybody with ears and a soul. Slick choreography in jogging bottoms? Love to see it.

This film is the highest-rated Christmas movie ever, yet it’s criminally underrated

Michaela Coel’s headline-making, genre-shaking I May Destroy You was one of the best televisual moments of the year, prompting nuanced conversations around the topic of consent. So was Zoom comedy Staged, prompting slightly less nuanced conversations around how long David Tennant’s hair has to get before we wouldn’t. Footballer Marcus Rashford was the month’s undisputed hero for turning around the government’s decision on free school meals for vulnerable children, while at the other end of the spectrum was poor Susan, the aubergine-phobe who ended up on the wrong side of Nigel Slater’s sass ladle. Nobody tell him about Dalgona coffee.

In between freaking out that our star sign had changed (me, an Aries? NASA, how dare you) and reacquainting ourselves with beer gardens, we were drinking in Beyoncé’s luminous Black Is King and setting eBay alerts for a Marine Serre moon print bodysuit. Other July winners included Hamilton on Disney+, Taylor Swift’s Folklore – the first of two surprise drops this year, and an album made for weeping into our nap dress if ever we heard it – and the toddler who interrupted his mum’s Sky News broadcast to ask for “two biscuits”, in what we can only describe as an extremely 2020 vibe.

In the grips of a record-breaking heatwave, Lavender was a left field winner – quite literally, as suddenly everyone on your Instagram feed was waist-deep in the purple stuff. So was Suffolk, as seemingly everyone not standing in a lavender field took their cottagecore aspirations for a Southwold staycation instead. But it was Cardi B and Megan Thee Stallion who really turned the heat up on summer 2020, as many of us were forced to explain to our parents that WAP doesn’t mean using the internet on your phone anymore. On that note, the less said about Eat Out To Help Out the better.

In a surprise twist, social media became one of the month’s biggest losers, as Netflix documentary The Social Dilemma had us deleting our apps quicker than you can say “carpal tunnel”. Then slinking back onto Twitter just in time for the Great British Bake Off’s terrifying ‘celebrity busts’; proof that even if everything is cake, not everything should be. But the high point had to be watching the Schitt’s Creek cast scoop Emmys in all four acting categories, which left us as giddy as a night on Herb Ertlinger’s fruit wine – even if the award was handed over by an assistant in a hazmat suit. Altogether now: ew, Covid.

As autumn rolled round we couldn’t decide which fly we’d rather be – the one one the wall of Dominic West’s marital castle, or the one on Mike Pence’s head. Hot off the back of news that Keeping Up With The Kardashians will be koming to klose next year, Kim K taught us that a pandemic is no obstacle to a dream birthday (all you need to do is, like, hire a private island and forcibly quarantine your loved ones for a fortnight!) while also reminding us that the word ‘humbled’ doesn’t mean what celebrities think it means. Back on this cursed island, Sky History put possibly the final nail in the coffin of TV talent show formats by casting an actual Nazi. But it’s not like he had it written across his forehead or– oh.

There was one very notable loser on the world stage in November, but let’s focus on the true winner of the US election instead: Four Seasons Total Landscaping, which swiftly became the most notorious strimming business since ‘the Love Island’ was declared a bikini waxing trend. Meanwhile in the loser corner it’s Rita Ora, both for her lockdown-defying birthday party and her AR advert for EE – “ar” and “ee” incidentally both noises we made on seeing the singer’s terrifying cyborg persona for the first time. And every time we’ve closed our eyes since.

The Crown ignited a global obsession with Princess Diana’s Big Collar Energy, while The Queen’s Gambit proved that chess can be sexy but that the little boy from Love Actually absolutely cannot. And not content with gifting us one of the year’s best memes, bedtime stories, poetry readings and a Netflix Christmas special, Queen Dolly Parton also chipped in a cool $1m to fund the world’s first viable Covid vaccine. We’re begging of you, please inject our nan.

From the Kardashian’s tree-off to Chrissy Teigen’s Winter Wonderland, these are 2020’s top celebrity Christmas trees

So here it is, merry Covidmas! Everybody’s having… Scotch eggs under a weak outdoor heater, in the rain. The humble bar snack enjoyed a renaissance as newly-tiered Brits pushed the boundaries of what constitutes a ‘substantial meal’, and sales of thermal long-johns rocketed as we tried to kid ourselves that risking hypothermia to meet a pal on a bench was delightfully Scandi. So hygge!

Meanwhile having elevated fishfingers to gourmet heights and taught us how to make toast, Nigella reaffirmed her position as the nation’s Fun Auntie by rebranding the humble kitchen appliance a ‘mîcro-wavé’ – leading to mass bemusement across the special corner of the internet that doesn’t understand jokes. But if we were to crown one final winner-slash-loser in this massive Quibi of a year, it would have to be the guy who travelled for four and a half hours on a jet ski from Ayrshire to the Isle of Man to see his girlfriend and was promptly jailed for breaching lockdown laws. A festive rom-com for These Times if ever there was one.