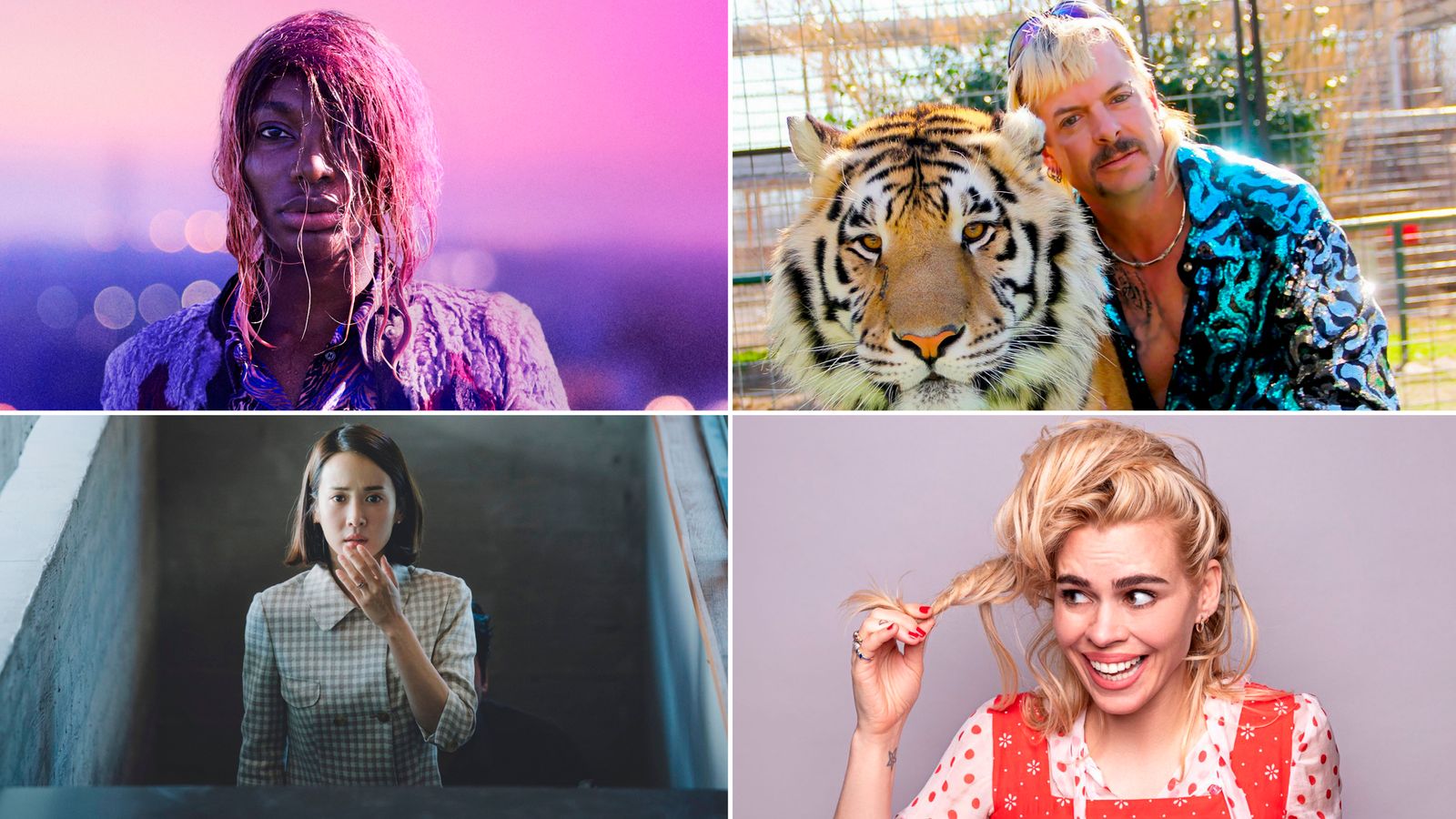 TV and film production may have been halted by the coronavirus pandemic, but for many 2020 will be the year they consumed more shows and movies than ever before.

Staying home meant turning to our screens – and we went from not quite believing our eyes while watching Tiger King at the start of the year, to desperately trying to figure out who killed Elena Alves in The Undoing towards the end.

On Sky News’ TV and film podcast Backstage we discuss the big new releases each week.

Now, using a complicated scoring system that even we barely understand, we can reveal our top picks from 2020. Listen to the latest episode or read on for all the info on how you can catch up if you’ve missed out.

One is a documentary from the Obamas’ production company about a camp for young disabled people and their subsequent political activism, the other is an adaptation of an August Wilson play that will almost certainly see the late Chadwick Boseman (above) in the running for a posthumous Oscar.

Both are compelling watches that will stay with you.

The latest animation from the Irish studio Cartoon Saloon, which is often compared to Japan’s Studio Ghibli, Wolfwalkers is the beautifully hand-drawn tale of a young girl whose father’s job is to cull wolves.

But when she follows him into the forest and meets a Wolfwalker, she starts to become the very thing her dad is tasked with wiping out.

David Fincher, of Seven and Fight Club fame, finally brings us the film written by his father that he’s been trying to make for years.

Shot totally in black and white, this film is about the writing of Citizen Kane and features Gary Oldman (pictured) as the titular Herman J Mankiewicz – but it’s Amanda Seyfried as starlet Marion Davies who really steals the show.

This disturbing documentary – exploring how addiction and privacy breaches are features, not bugs, of social media platforms – had us all thinking twice about picking up our phones.

A wake-up call about how much we use our devices.

One of the best British horrors in years, Sope Dirisu and Wunmi Mosaku play refugees from South Sudan.

Their new start in England takes a terrifying turn when the house they’re made to stay in takes on a demonic spirit.

For all those who never got to see Lin-Manuel Miranda’s hit Broadway musical, Disney + stepped up over the summer, bringing forward its release of the musical by a year.

This hip-hop interpretation of the life of America’s founding father was a revolutionary moment in theatre when it came out, and is just as enjoyable to watch at home.

4) Nomadland – due for release in UK cinemas on 19 February

Frances McDormand gives arguably the best performance of her career so far in this film about a 60-something widow who begins a nomadic life.

This won several awards at the Venice and Toronto International Film Festivals and is a definite contender for the Oscars.

It’s definitely one to look out for in 2021 – think Groundhog Day meets Wedding Crashers.

Boasting one of the most celeb-packed casts of 2020, Aaron Sorkin’s courtroom drama about the prosecution of counterculture protesters in the 60s had us in tears.

Its political messages felt particularly relevant against the backdrop of what was happening in the US in 2020 – likely to be a big contender for Netflix come awards season.

While it might feel like an age since this South Korean movie picked up its Oscars, Bong Joon-ho’s thrilling take on greed and class discrimination remains the stand-out film of 2020.

Dark and disturbingly visceral, it’s a modern classic and a must watch if you still haven’t seen it.

Billie Piper, back with her Secret Diary Of A Call Girl collaborator Lucy Prebble, treated viewers to some seriously outrageous and cloyingly embarrassing scenes as we watched former child star Suzie Pickles’ life and acting career turned upside down following the leaking of nude photos on the internet.

There was a real innocence to this comedy starring Jason Sudeikis as a clueless American sports coach who is flown to England to manage a football team by the club’s new chairman, a divorcee intent on running her husband’s former team into the ground.

The show’s optimistic and kind leading man made each episode a comforting 20 minutes of escapism.

Personal and powerful, this five-part series – set between the late ’60s and early ’80s and exploring black British identity – resonated powerfully coming after a summer of real-life protests against racial injustice.

Based on Sally Rooney’s best-selling novel about the electricity of first love, we were swept along by the BBC adaptation of the on-again-off-again relationship between Marianne and Connell.

Stars Daisy Edgar-Jones and Paul Mescal were propelled to fame, while Connell’s chain provoked fan accounts, thought pieces and even an increase in sales, according to some jewellers.

The surprise pop-culture hit of the pandemic introduced the world to big cat keeper Joe Exotic and his bitter rivalry with fellow enthusiast Carole Baskin.

It was compulsive viewing as the documentary became darker and weirder with every episode, from employees losing limbs to the hiring of hitmen.

With A-listers Nicole Kidman and Hugh Grant playing husband and wife, this glossy thriller about a therapist trying to work out if her husband has murdered his lover reeled us in from the start – and as we waited for more to be revealed each week, it proved we’re still happy to tune in for appointment TV.

No matter how much hard work your relatives might have been over Christmas, this is a drama to reassure you that at least your loved ones aren’t as awful to each other as the Roy family.

Jesse Armstrong’s show about the power struggles, double dealings and dysfunction of a media tycoon’s family delivered a cliffhanger ending that nobody saw coming.

Exactly what happened after that press conference? We still can’t wait to find out.

A drama about chess had the potential to be, well, dry to say the least, but Netflix’s most-watched scripted limited series of all time certainly hit the mark.

A sexy, dark and compelling take on one girl’s rise to international chess stardom. You’ve probably seen it already, but maybe worth a re-watch?

“Ew, David!” 2020 saw this underrated comedy finally get the critical attention it deserved with a slew of Emmy awards.

About a family of down-on-their-luck millionaires struggling to adapt to small-town life, the show is now in its sixth season, and is silly and poignant as the adult children find love and learn how to fend for themselves. Start from series one.

1) I May Destroy You – BBC iPlayer

Who raped Arabella? This series was every bit as intense as its premise but also funny, clever and unlike anything we’d seen before – Michaela Coel provided the best drama of the year. Brilliantly acted, beautifully shot, her take on consent, race and millennial life was our runaway winner.

Andrew Mittman’s MGM-Based 1.21 Promotes Kai Dolbashian To Head Of Development
Dakota Johnson Discusses What It Was Like Shooting ‘Fifty Shades Of Grey’ And Working With E.L. James
‘A dark day for women’: Billie Eilish blasts US abortion ruling as she becomes Glastonbury’s youngest headline act
Eminem and Snoop Dogg Share Video for New Song “From the D 2 the LBC”
Broadway Cast Announced For Tom Stoppard’s ‘Leopoldstadt’