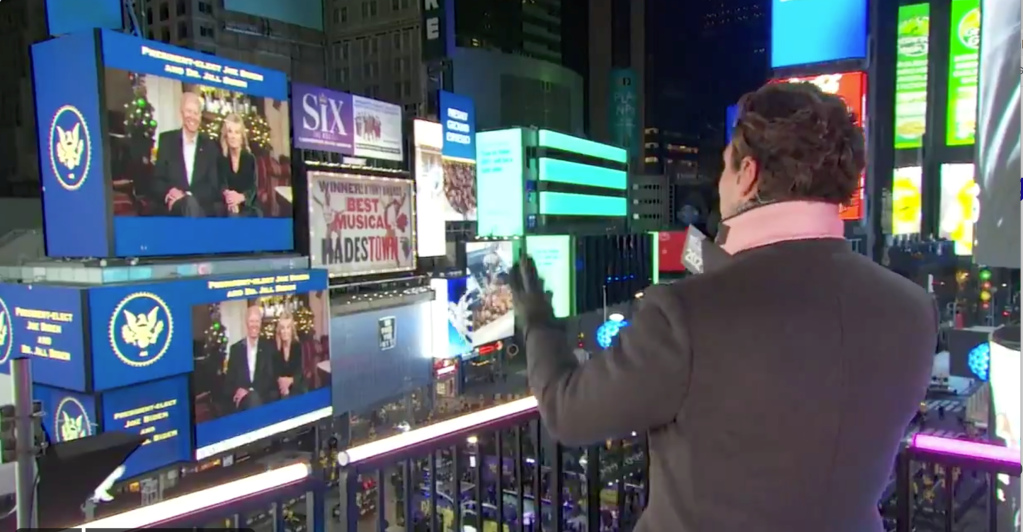 In what host Ryan Seacrest described as “a first”, President-elect Joe Biden and future First Lady Jill Biden appeared live from their home on ABC’s Dick Clark’s New Year’s Rockin’ Eve with Ryan Seacrest. During the interview, broadcast on jumbotrons in Time Square, Joe and Jill Biden thanked frontline and essential workers for their bravery and for keeping the country together and urged Americans to get Covid-19 vaccine when it becomes available, with Joe Biden calling for a better way to get “more vaccines out there quicker” in light of the slow distribution speed so far.

Asked about what he hopes for in 2021, Joe Biden said, “I’m more optimistic about America’s chances than I’ve ever been… I am absolutely positive, confident, that we’re going to come back and come back stronger than we were before.”

The Bidens had planned to end their New Year’s eve video message to Americans with a burst of confetti but, in a rare mishap on the ABC telecast, the confetti popper held by Jill Biden malfunctioned. (Watch the full interview below.

ABC, NBC, Fox and CNN all ushered in 2021 live from New York’s Time Square. The place, normally packed with some 1 million revelers, was deserted save for some socially distanced frontline/essential workers and their families as well as a number of car dealership-style tube men aka air dancers and a pile of beach balls in front of the stage where fans would stand.

Following Covid-19 protocols, TV hosts wore masks when close to the few audience members inside the square and took them off when on camera and away from spectators.

Webb Telescope: NASA to Reveal Deepest Image Ever Taken of Universe
Six of the best bits you might have missed at Glastonbury
Dyslexic People, Skilled at Exploring, Helped in Evolution That Led to Human Survival: Study
‘Yellowstone’ & ‘1883’s Kevn Costner, Faith Hill And Tim McGraw On How Taylor Sheridan’s Words Brought The Dutton Clan To Life
How To Directly Impact Democracy: Book Censorship News, July 1, 2022