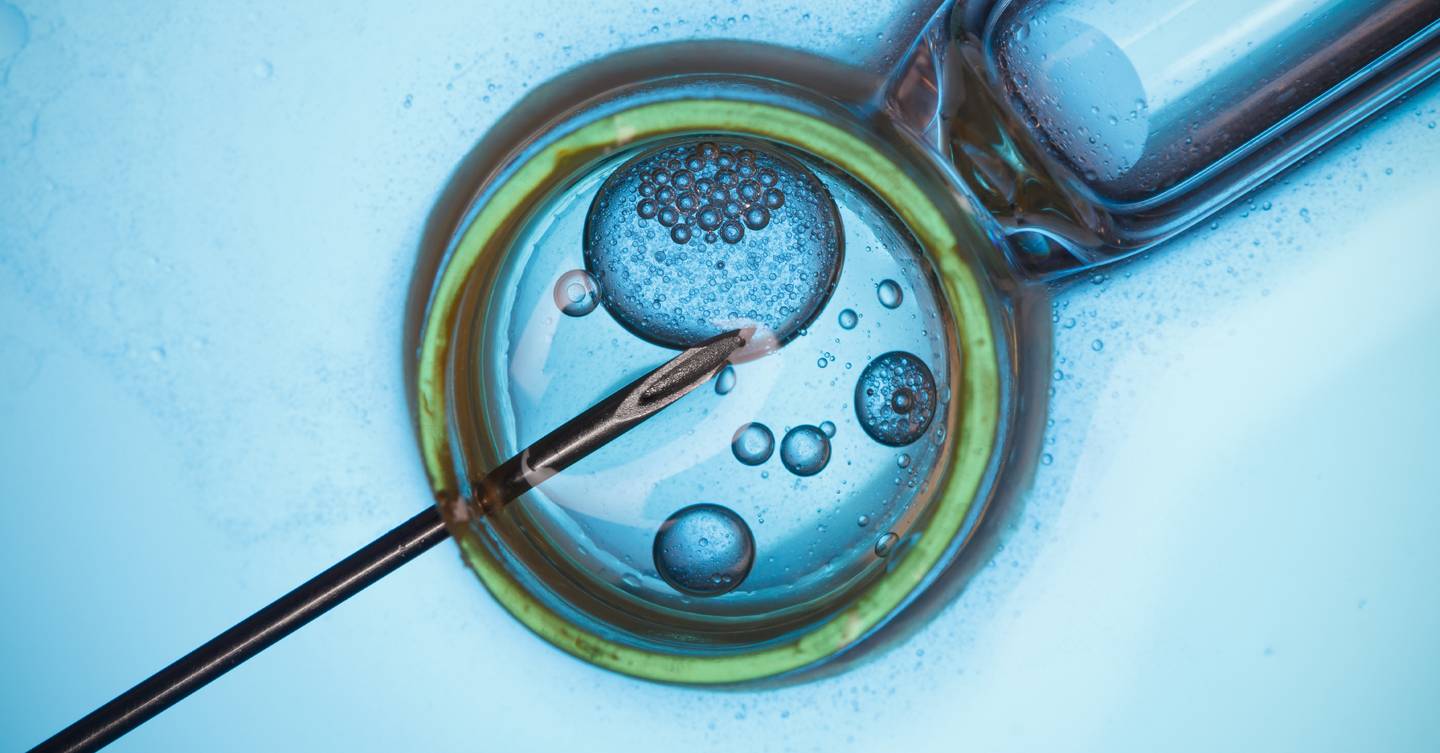 New year, new baby? Maybe not quite, but we’re guessing you’re here because you’re starting to think about it. Or maybe you’ve done your thinking and are in the ‘seeing what happens’ phase. And maybe nothing’s happened.

If 2021 is the year you’re making a concerted effort to start a family – or simply giving yourself a fertility overhaul, but you don’t really know where to start, join the club.

Trying is Glamour’s new fertility column, which aims to be here with you every step of the way, whether that’s covering off the endless jargon involved in the fertility ‘industry’ (sadly, much of this world feels very much like an industry, more on which later), to recommending the best foods for you both to eat to boost fertility naturally, weighing up whether or not to freeze your eggs and explaining what to do if you’re thinking about trying assisted conception.

Fertility can at times feel a very un-feminist topic. My (female, feminist) friends and I have frequently bemoaned the fact that all the legwork that comes with trying to have kids seems to fall to the females. We’re the ones tracking our cycles, taking our temperatures, making charts. We’re the ones who are poked and prodded, scanned and stirrupped, when things don’t go to plan. Biology is a bitch like that. So while this column will be talking to women readers, we’re hoping and praying you’ve got a partner along for this rollercoaster – and they should be reading this too, because I hope I don’t need to tell you at this stage, that baby-making takes two.

So… here’s a glossary of the fertility lingo you can expect to hear as you roll along the motorway to motherhood. We’re right there with you for every bump in the road.

Amenorrhea: The absence of a menstrual cycle or periods for more than three months is termed amenorrhea (pronounced a-men-or-ree-ah). There are many reasons for this to happen, but they need to be investigated by a doctor.

AMH – Anti-Mullerian Hormone: is a protein hormone produced by cells within the ovary. These levels can help to assess your ovarian egg reserve and therefore your fertility.

Andrology: The area of medicine specialising in issues to do with the male reproductive system and male fertility.

Anovulatory: When the ovaries do not release an egg during a menstrual cycle, preventing ovulation. Chronic anovulation is a common cause of infertility.

Antisperm Antibody Test: A test that can determine if antibodies on the surface of sperm are interfering with the ability of sperm to move, penetrate the cervical mucus, or fertilize an egg.

Artificial insemination: Inserting sperm into the cervix to improve the chances of pregnancy.

Blastocyst: The term for a successfully fertilised embryo of about five to nine days, which journeys down the fallopian tubes to the uterus. A thin-walled hollow structure, a blastocyst contains a cluster of cells – the inner cell mass (ICM) – from which an embryo arises. It takes about three days to reach this destination, where it will hopefully implant into your uterine lining.

BFN – Big fat negative: A term widely used on fertility or pregnancy discussion groups for a negative pregnancy test. A horribly familiar term for anyone struggling with fertility issues.

BFP – A Big Fat Positive: You can see where I’m going with this.
Cervical mucus: A fluid or gel like substance which changes consistency throughout a woman’s menstrual cycle due to the fluctuation of hormone levels. Monitoring this is another way of tracking fertility.

Clomid: A medication taken by women with ovulation issues and polycystic ovarian syndrome.

Donor egg (oocyte): Eggs collected from one woman and donated to another. Eggs are sourced from either a friend or relative (known egg donation) or from an anonymous donor or egg bank.

Donor sperm: Sperm produced from a man who is not the woman’s partner to help have a child.

Egg retrieval: Also called oocyte capture and egg collection, this is a painless procedure whereby a woman’s eggs are retrieved from her ovaries for use either IVF or ICSI.

Embryo: An egg successfully fertilised by a sperm becomes an embryo and it remains such until it starts forming tissues and organs aroundabout eight or nine weeks. After that time it is termed a foetus.

Egg freezing: Also known as egg cryopreservation, this is the deep-freezing of a woman’s eggs to preserve them for future use.

Egg thawing: A treatment where patients use previously frozen eggs – either their own or from a donor – in an IVF treatment cycle.

Embryo cryopreservation: The freezing of embryos (a fertilised egg and sperm) made during an IVF cycle, for future use.

Embryo transfer (ET): The placement of an embryo into the uterus using a fine catheter during assisted reproduction.

Endometrium: The lining inside the uterus.

Fibroids: Typically benign tumours in the uterus which commonly occur in women of childbearing age. They rarely cause infertility, but can sometimes cause complications in pregnancy or delivery.

Foetus: After nine weeks of pregnancy, the embryo is termed a foetus, and it is called so right up until birth.

Follicle: These fluid-filled sacs, found in the ovaries, grow and release eggs.

Missing Love Island? The bosses behind the ITV show are launching a new dating show and it’s out sooner than you think

FSH – Follicle-stimulating hormone: Present in both women and men and made by the brain’s pituitary gland, FSH is essential for the growth of ovarian follicles in women and sperm production in men. It can be checked by a blood test.

HyCoSy: Hysterosalpingo Contrast Sonography (HyCoSy) is a straightforward procedure whereby a dye is passed into the uterus using a catheter, and then an ultrasound used to check fallopian tubes for problems or blockages.

Hysteroscopy: A procedure in which a thin, telescope-like instrument is inserted through the cervix into the uterus, enabling a doctor to see any problems and correct issues if needed.

ICSI – Intracytoplasmic sperm injection: ICSI involves directly injecting a single sperm into an egg to fertilise it. This technique is useful for male factor infertility – when there is a low sperm count or when the sperm are abnormally shaped or have poor motility. ICSI itself is very successful at helping the sperm and the egg to fertilise – fertilisation happens in around 90% of cases, however, this does not guarantee a successful pregnancy.

Implantation: The stage of pregnancy at which an embryo embeds in the lining of the uterus.

IUI – Intra-uterine insemination: One of the most straightforward forms of assisted fertility treatment, which involves separating the best quality sperms and injecting them through the womb and into the uterus close to the time of ovulation. This helps more good quality sperm reach and fertilise the egg.

In vitro fertilisation (IVF): The NHS describe IVF very succinctly, thus: ‘an egg is removed from a woman’s ovaries and fertilised with sperm in a laboratory. The fertilised egg is then returned to the woman’s womb to grow and develop. It can be carried out using your eggs and your partner’s sperm, or eggs and sperm from donors.’

Laparoscopy: A minimally invasive low-risk diagnostic surgery which uses a lighted camera to look inside the abdomen or pelvis. In gynaecology, it’s use to look for endometriosis or other conditions affecting the female reproductive system.

Luteinising hormone (LH): A hormone secreted by the brain’s pituitary gland. In women, a rise of LH triggers ovulation.

Morphology: The size and shape of sperm.

Oestrogen: A hormone produced mainly by the ovaries in increasing amounts in the first two weeks of the menstrual cycle. Oestrogen levels reach their peak around ovulation, after which it gradually decreases.

Oocyte: Another name for an egg.

Ovarian reserve test: A blood test and pelvic ultrasound scan to detect approximately how many eggs are left in a woman’s ovaries.

Postcoital Test: A standard fertility test in which a sample of cervical mucus is taken after intercourse to check the number and behaviour of the sperm.

Miscarriage: Every question you have, answered by the experts

Preimplantation genetic screening (PGS): PGS is an optional laboratory test used in IVF to ascertain whether embryos have any problems with their chromosomes. There is no guarantee that PGS testing can improve your chances of a healthy pregnancy.

Progesterone: This female sex hormone is produced mainly in the ovaries following ovulation each month. It helps to regulate your cycle, but progesterone’s main job is to thicken the lining of your uterus and get it ready for pregnancy.

Sperm motility: The ability of sperm to move properly, or “swim”, towards an egg. Sperm that do not “swim” properly will not reach the egg in order to fertilise it, so motility is a key factor in creating a pregnancy.

Unexplained infertility: Defined as when standard fertility testing – scans, tubal patency tests and semen analysis – have failed to show a cause for problems conceiving.