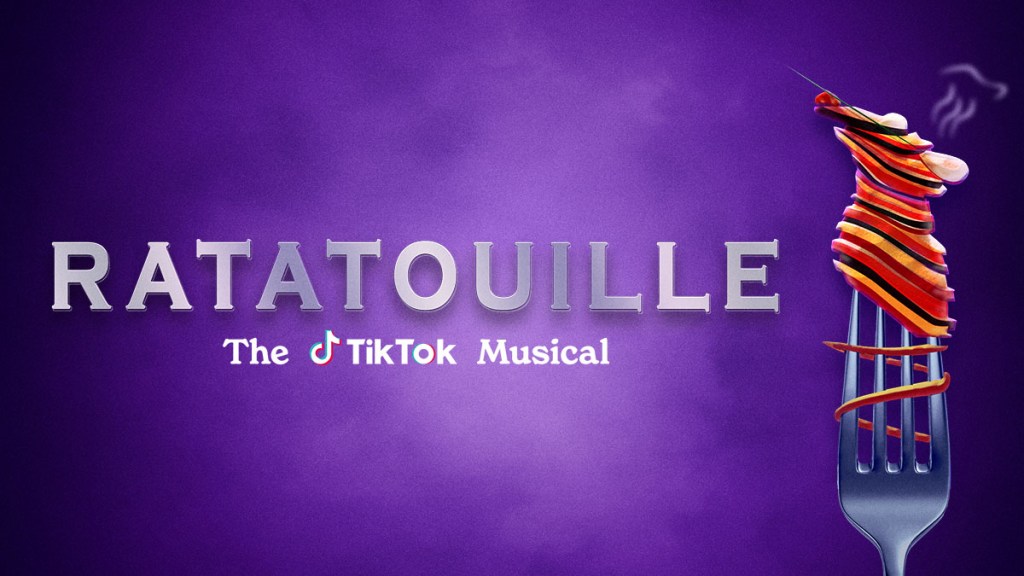 When Broadway producer Greg Nobile heard Gayle King singing the words to “Ode To Remy” on The Morning Show some weeks ago, he knew a sort of leap had been taken. “I thought this thing that started online has not only become pop culture,” he recalls, “it’s become, like, culture culture.”

“This thing,” of course, is what’s now called Ratatouille: The TikTok Musical, perhaps the first, or at least most widely seen, crowdsourced Broadway-style musical ever. By now just about everyone knows the story of how one woman’s single, simple off-the-cuff little love song to a rat went viral and inspired other, increasingly elaborate musical numbers based on the 2007 Disney-Pixar computer-animated film Ratatouille.

But how the viral sensation made its way to the virtual, 45-minute one-time-only “Broadway” staging – complete with an all-star cast is, in its way, equally as implausible and certainly as undeniable. Even Disney, ever the ferocious protector of its image and properties, wouldn’t or couldn’t stand in the way.

The result: Ratatouille: The TikTok Musical will stream tonight, Friday Jan. 1, at 7 pm ET and be available for streaming for 72 hours. Tickets are $5 and available exclusively at TodayTix.com, with all proceeds benefitting The Actors Fund. The event is produced by Seaview Productions in association with TikTok and TodayTix, with Michael Breslin, Patrick Foley and Slave Play‘s Jeremy O. Harris aboard as Executive Producers.

A quick Ratatouille TikTok primer: Last August, TikToker (and elementary school teacher) Emily Jacobsen posted a short, funny, sticks-in-your-head ballad about her love for Remy, rat of Ratatouille, with her own chipmunk-style vocals. “Remy the ratatouille/the rat of all my dreams/I praise you, my ratatouille/May the world remember your name.”

“I think with so many theaters and performance venues closed, people like me were just missing all those things that we once really relied on and even took for granted,” “Ode” creator Jacobsen tells Deadline. “It just continued to grow, and suddenly there was a [virtual] Playbill, and choreography, and even stage managers giving stage notes.”

Among the 200 million viewers was producer Nobile, whose credits include such recent Broadway hits as Slave Play and Sea Wall/A Life. He and others at his production company Seaview were fans. “We just found it really charming and really funny,” Nobile says. “I vividly remember two distinct moments: One was watching Kevin Chamberlain’s “Anyone Can Cook” video that blew up overnight, and then a couple days later, Gayle King on CBS This Morning  singing ‘Ode to Remy.’

“I thought it would be too sad that while Broadway is shuttered and while we’ve all been having these radical conversations about accessibility and diversity and inclusion, to not do something with this thing that has so radically transformed how we make theater,” Nobile says. “And the show was good.”

Disney had already been dropping hints that it too found the phenomenon entertaining, or at the very least not lawsuit material.

Recalls Jacobsen, “I’d become really concerned and nervous that Disney was going to come in with some kind of legal notice to stop, even though all I had done was create an original song about the character, and I wasn’t profiting in any way off it. But then suddenly things started popping up that made me think, all right, they’re not angry. It started when they quoted my lyrics on various social media platforms. Then the Disney Parks TikTok page even posted a video they called their unofficial audition for the Ratatouille musical.”

Nobile, too, noticed Disney’s tentative embrace of, or at least delight with, the TikTokers’ embrace of its 13-year-old movie, and so he reached out to a friend of his at the studio: “I said, Clearly you guys are thinking about doing something with this and I must be the 100th person to ask, but is there a conversation for us to have?” Nobile’s friend put the producer in touch with Tom Schumacher, president of Disney Theatrical Group.

“So late on Thanksgiving Eve night,” Nobile says, “I pitched an idea to Tom, that we should do something with this and to make it a benefit for the Actors Funds so we could support this organization that had given away $18 million to our community in the last couple months.”

Schumacher liked the idea, and both agreed that whatever was to be done needed to be done fast. “The worst thing that could ever happen,” Nobile says, “would be to Broadway-ize this thing and take eight months or eight years trying to make a musical that didn’t feel authentic to what had been created online. We couldn’t miss the moment. Broadway does a really good job of taking something cool and making it not cool at all.

“Tom gave us the OK that weekend, and let us run with it.”

With Jacobsen and other of the TikTok creators – notably Daniel Mertzlufft, who signed on as music supervisor and arranger – already looped in, Nobile called on writers Michael Breslin and Patrick Foley, whose work has been staged at New York Theater Workshop where Seaview first produced Jeremy O. Harris’ Slave Play. Nobile and the writers quickly settled on their first choice for director: Lucy Moss, director of the London and Broadway productions of Six, the musical about the wives of Henry VIII. “When I saw Six in London,” Nobile says, “I thought it seemed so underground. It felt made at home, and people were downloading the album as they walked out of the theater. We got Lucy on the phone, talked her through it and she was on board.”

Another early recruit was Taylor Williams, casting director of New York Theater Workshop and a frequent Seaview collaborator. With Williams’ help, the team started reaching out to actors, the first two being Andrew Barth Feldman and Kevin Chamberlin, who had already contributed TikTok video. “Those two choices,” Nobile says, “were really easy. They had already become synonymous with the show.”

With the exception of lead actor Burgess, who taped his many scenes in a studio, the socially distanced cast members recorded themselves from home in the days leading up to a Dec. 24 deadline. “It was sort of a Christmas miracle,” Nobile says, “because we gave people like 20, maybe 36, hours after we sent them their material. At one point I thought, Oh my God, nobody’s going to do this, we’re out of our minds. We’re in too deep. We’ve asked these Broadway superstars to put on rat whiskers and film themselves on Christmas Eve. I was nervously refreshing the Dropbox where we’d asked them to put their videos, and then on Christmas Eve all of a sudden, there they were, one after another. Everybody was in on time. Everybody was in costume. Everybody had learned their stuff. Mary Testa was wearing a mustache. Wayne Brady was wearing whiskers. Ashley Park was wearing a full chef outfit.”

Jacobsen says that throughout the process, she and the original TikTok creators have been kept in the loop, with Seaview taking pains to avoid any appearance of the big Broadway producer swooping in to appropriate the grassroots efforts of the mostly amateurs. Documents were signed giving the creators full ownership of their songs, along with what Jacobson describes as a nominal fee. The songwriters – Kevin Chamberlin, RJ Christian, Nathan Fosbinder, Emily Jacobsen, Sophia James, Katie Johantgen, Daniel Mertzlufft, Alec Powell, and Blake Rouse – all receive due credit, and their ideas have been heard. “I can’t be more grateful,” Jacobson says.

Disney, too, is steering clear of any appearance of profit-making. The studio has said in no uncertain terms that there are no plans for any future stage development of Ratatouille, and that the current project is strictly a one-night-only event to raise money for The Actors Fund.

“There are no plan for Disney to develop this title as a Broadway show,” Nobile says, “and there are no plans for the TikTok musical to become anything other than this benefit for The Actors Fund. And that’s actually been the thing that’s been most exciting. This isn’t something that’s taking five years to develop. The benefit is the end of the road, and this production is as realized as it’s going to get, and we feel a great honor and responsibility in that.”

Other Broadway insiders have boarded the Ratatouille train as well: Playbill is offering a Ratatouille program at the Playbill Store for $20, with all proceeds benefitting The Actors Fund. Broadway For All, an organization dedicated to providing young people from disparate cultural and socio-economic background with the knowledge, means, and platform to be creative voices of the next generation, will present a special pre-premiere red carpet on Playbill.com featuring the stars and creators of Ratatouille: The TikTok Musical, kicking off tonight at 6:30 pm ET on Playbill.com.

Jacobsen, who hinted that she might make a surprise appearance Friday night, is loving the process. She recently was given a tour of the still-under-construction Remy’s Ratatouille Adventure attraction at Disney World’s EPCOT, and has been in frequent Instagram touch with her original TikTok gang. Family and friends have been excited for her virtual Broadway debut, even as her young students and teaching colleagues have remained unaware of the star composer in their midst.

“My students are in 3rd and 4th grades, so they’re really not yet the TikTok age,” Jacobsen says, “and the teaching staff are, I think, mostly above the TikTok age bracket. So either nobody’s heard anything or they’re just not saying since I haven’t really been out there about sharing it. It feels like I’ve been harboring this huge secret.”

That secret is going to be a bit harder to keep come Friday night at 7 pm ET. when a 45-minute musical about a charming rat who dreams of becoming a chef ushers in a new, hopeful year for a Broadway that can’t be done with the old one fast enough.

‘Ain’t No Mo’ & ‘A Beautiful Noise: The Neil Diamond Musical’ – Broadway Reviews
Hyaluronic acid explained: uses, benefits, and the 20 best serums for every skin type
The New York Times Bestseller List vs. Their Best of List for 2022
US country star, 37, dies hours after getting married
11 Punny Mugs for Language Lovers