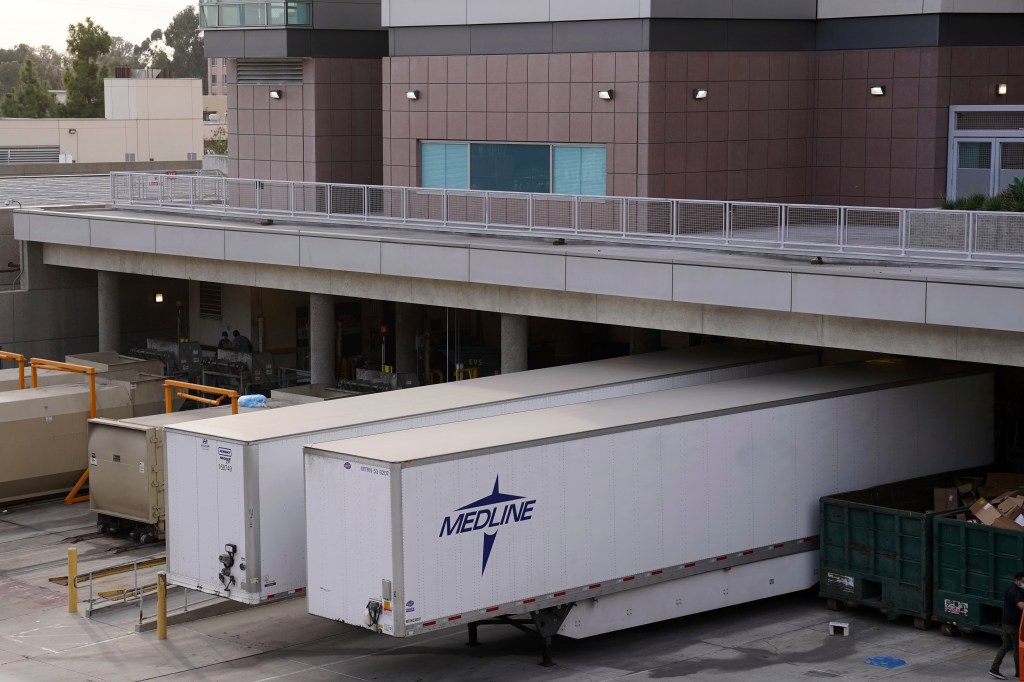 California Governor Gavin Newsom’s Office of Emergency Services announced on Thursday that a temporary morgue would be erected in the parking lot adjacent to the L.A. County Coroner’s building to handle the record number of bodies it’s seeing.

The facility will include at least five 53-foot trailers supplied by the state and five more supplied by the county, along with an unknown number of “ground refrigerated storage containers.”

An AP photo taken Thursday was reminiscent of images from New York last spring. It showed two temporary refrigerator trailers at L.A.’s County-USC Medical Center hospital. A California Office of Emergency Services statement contained photos of a similar trailer arriving in hard-hit Imperial County. In all, according to OES, the state was deploying 88 such units.

County statistics showed a total of 761 beds available in the county’s 70 “911-receiving” hospitals. There were 54 adult ICU beds extant.

Those 70 hospitals with emergency rooms have a total licensed capacity of about 2,500 ICU beds. Last week, the county averaged 31 available adult ICU beds on a daily basis, with 78% of all ICU patients in the county being treated for COVID. Ten days ago the percentage of Covid-infected ICU patients in those same hospitals was about 50%.

Los Angeles County on Friday reported its first-ever count of more than 300 daily coronavirus-related deaths, at 318. By comparison, an average of 170 people die in the county every day of all other causes.

The 318 new deaths lift the countywide pandemic total to 11,863. To make another comparison, that’s more deaths in a year than any other single premature cause of death, including heart disease, per the county’s most recent figures.

“This very clearly is the latest surge for the winter holidays and New Year’s,” said Simon. “And it’s likely to continue over the next week or two. We do expect these numbers continue to be high over the next couple weeks.”

The rising number of deaths has led to issues at some hospitals. Those facilities have been running out of space to store bodies, particularly with funeral homes overrun and unable to accept more. A California National Guard team was previously dispatched to the county coroner’s office to assist with the management of the increasing deaths.

“We work with our sheriffs, our coroners, our mortuary owners to make sure there’s a balance throughout the state, region by region, in dealing with decedents and how we can ensure that we don’t get large backups or, if we do have backups, that they’re dealt with with respect and dignity,” said Ghilarducci about the plan.

One objective is “that we have the appropriate equipment that is in place or materials that are required for coroners and medical examiners to effectively deal with the decedents.” he continued. “We will continue to work with each of our 58 counties to make sure that each of these folks ar etaken care of in the most respectful manner.”

Per an OES statement:

In response to needs currently expressed by county officials, Cal OES facilitated the distribution of 88 refrigerated trailers. Ten of those trailers have been leased by Cal OES and are specifically designed to serve as temporary morgues. They have been sent to locations within Imperial, Sonoma, San Bernardino, Monterey, and Los Angeles Counties. In addition, the Hub Group, an Illinois-based company, has donated 78 refrigerated trailers to the counties and hospitals within the State of California, whose distribution has been mediated by Cal OES.

Since these trailers are not designed to be used as morgues, Cal OES is working to provide the appropriate shelving to at least double an individual trailer’s capacity.