The health secretary has suggested the prime minister was operating within the rules when he went cycling seven miles from Downing Street during lockdown.

Boris Johnson was spotted at the Olympic Park in east London with members of his security detail on Sunday, according to the Evening Standard. Official regulations introduced under England’s third COVID-19 lockdown state that exercise is limited to once a day and that people should not leave their local area.

A Downing Street spokesman declined to comment on the story when asked about it at a regular Westminster briefing with journalists.

But a source cited by the Evening Standard said Mr Johnson was exercising, adding: “But he did note how busy the park was and he commented on it at the meeting last night.

Facing questions at a Downing Street news conference, Health Secretary Matt Hancock was asked whether people should exercise seven miles from their home, widely seen as a reference to the Evening Standard report about the prime minister. 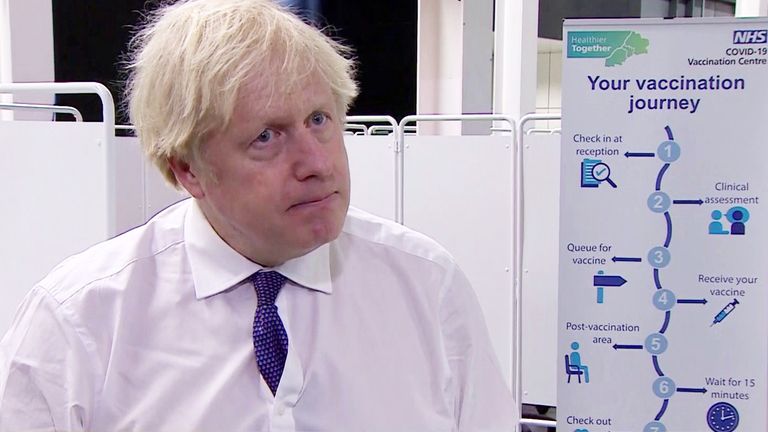 “And we have been seeing large groups and that is not acceptable. And you should be two metres apart from the other person.

“If there are too many people breaking this rule then we are going to have to look at it.

“But, I don’t want to do that because, for many people being able to go for a walk with a friend, that often is their only social contact.

“It is okay to go for a walk with one other person around a park, but you should stay two metres apart from that other person.

“And, likewise, it is okay, if you went for a long walk and ended up seven miles away from home, that is okay.

“But, you should stay local, you should not go from one side of a country to another, potentially taking the virus with you.”

A witness told the Press Association that the prime minister was “leisurely cycling with another guy with a beanie hat and chatting while around four security guys, possibly more, cycled behind them”.

“When I realised the person looked like Boris I cycled past them to hear his voice and be sure it’s him. It was definitely Boris,” they said.

“Considering the current situation with COVID I was shocked to see him cycling around looking so care free,” added the woman, who asked not to be named.

“Also considering he’s advising everyone to stay at home and not leave their area, shouldn’t he stay in Westminster and not travel to other boroughs?”

The MP for Hammersmith in west London said: “Once again it is do as I say not as I do from the prime minister. London has some of the highest infection rates in the country. Boris Johnson should be leading by example.”