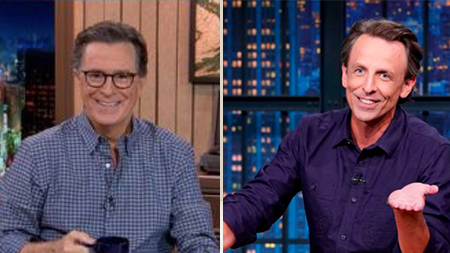 Nearly a week may have passed since the violent attack on the U.S. Capitol by supporters of Donald Trump, but January 6, 2020 will go down in history as a dark day for Americans.

On Monday’s episode of The Late Show, host Stephen Colbert noted that the fatal incident on Capitol Hill, which left six dead, made him “more upset than he could ever remember.” Even more so than 9/11, he added.

During his opening monologue, Colbert added that upon further investigation, the violent storming on the Capitol had been thoroughly planned. In addition to Trump setting a date and place for supporters to meet, the late night host said rioters had gathered materials for what could have been a more deadly incident – including pipe two bombs found outside the DNC and RNC buildings, and a truck containing eleven molotov cocktails.

“This was a coordinated and planned attempt to terrorize, if not kill, our nation’s elected leaders,” Colbert said of the “homegrown terrorists on a jughead jihad” who attacked the Capitol on Wednesday.

Shortly after news of the attack circulated throughout the nation, and even the world, talk of impeachment and invoking the 25th amendment also made their way into the conversation. Removing Trump, however is “the bare minimum we should expect from our elected leaders,” Seth Meyers said on Monday.

“[Trump’s removal] is an urgent matter of national security and the bare minimum for the preservation of our crumbling democracy,” the late night host said during his “A Closer Look” segment.

While the Democrats and other elected officials look into ways to remove Trump from office, notable GOP figures including Kevin McCarthy and Roy Blunt say that impeachment and premature removal can further divide the country. However, it’s the same elected officials who have also called for unity following Wednesday’s violent incident.

To the calls for unity from officials who disagree with removing Trump from office, Meyers asks: “How can we seek unity with people who want a confederacy?”

See the segments from Colbert and Meyers below.

Spirit delays shareholder vote on merger hours before meeting to continue deal talks with Frontier, JetBlue
Kohl’s says a real estate sale is on the table after scrapping deal talks
Use this Cult Beauty discount code and save 20% on brand new makeup for all your summer plans
‘The Full Monty’ Star Hugo Speer Sacked From Show By Disney+ After Allegations Of “Inappropriate Conduct”
Jim Henson’s Creature Shop Teams With Britain’s Royal Shakespeare Company To Make Puppets For Stage Show Based On Hayao Miyazaki’s ‘My Neighbour Totoro’