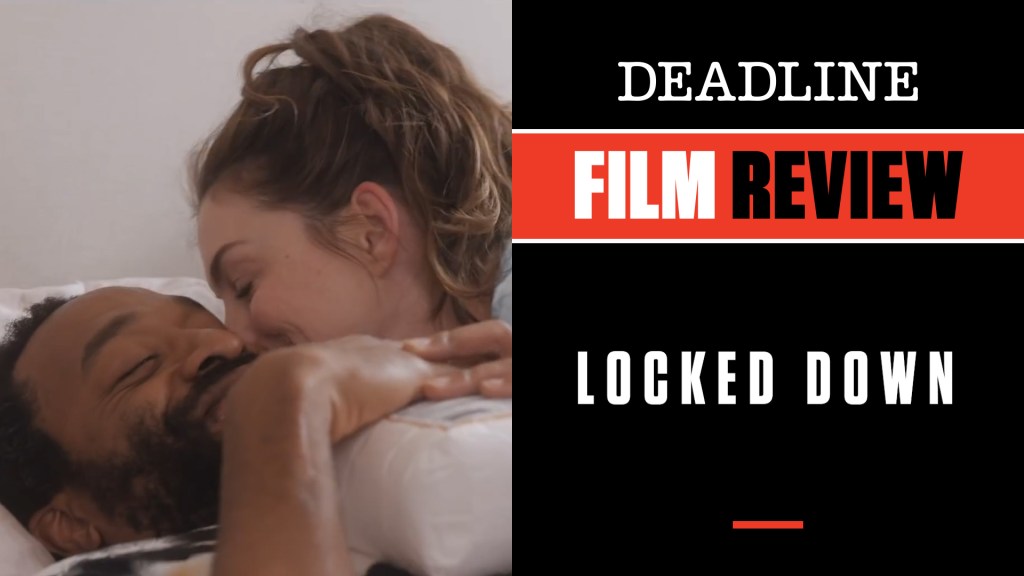 If you are going to make a movie from scratch during a pandemic lockdown, you might as well have a little fun with it. That is exactly what director Doug Liman and screenwriter Steven Knight are doing with the irresistible stew they have concocted for Locked Down. Fortunately they have skilled stars of the caliber of Anne Hathaway and Chiwetel Ejiofor to help pull it all off. And the premise, the perfect Ocean’s 11-style heist attempt as the rest of the world is caught up in a Covid quarantine, is awfully clever.

That they made this in 18 days — shot it in September, got it through post in October — and delivered it to Warner Bros and HBO Max for streaming starting Thursday is pretty damn impressive considering this wasn’t even an idea before summer. It is no gimmick movie either because it takes the current situation we are all in, makes it instantly recognizable and sharply observed, adds in a favored movie genre to give it some real payoff in its second act, and delivers witty and keenly funny dialogue for a talented cast that also includes brief-ish appearances (mostly in Zoom settings) from the likes of Ben Kingsley, Ben Stiller, Mindy Kaling, Dulé Hill, Lucy Boynton and a deliciously nervous turn from Stephen Merchant as a Harrods employee.

The first half, after an opening cameo from what the credits describe as a Hedgehog played by Sonic, is mostly devoted to the souring relationship of a couple living together in London. Linda (Hathaway) is a somewhat frustrated but tough-as-nails CEO of the UK branch of a slippery worldwide conglomerate. She is breaking off her relationship after 10 years with Patton (Ejiofor), whose past is shady and now balances his love for spouting poetry in the middle of their neighborhood with his day job as a van delivery driver. The lockdown due to coronavirus has taken its toll, but this couple has clearly lost their mojo and have little to say to each other other than bickering anyway.

Linda wants to start over, but exposure to someone who tested positive has extended their quarantine period, much to her complete distress as we see her drearily conducting business meetings via Zoom, or other conversations, while Patton can’t seem to catch a break and is forced to sell his prized motorcycle. The back and forth between them is wickedly funny and pretty real, delivered in all-pro style by these two actors, with Ejifor showing real comic chops and timing heretofore underexposed in movies.

Their “professional” worlds bring them back together, though, in a unique way, converging when Linda’s job requires her to get the $3 million Harris Diamond transported from the famous Harrods department store to some unnamed corrupt dictator across the globe. Meanwhile, Patton is given a job by his cagey boss (Kingsley) to do a pickup at the very same Harrods. Kismet! After much back and forth, Linda and Patton craft the perfect crime and decide to steal the jewel, made easier since Linda (who formerly worked at Harrods for five years) knows the layout well and also that a fake version of it is actually on display in the store. All they have to do is come up with a practical way to get officials to let them have the real one and then swipe it for the fake, which they will lift in plain sight.

I won’t say more, but most of it makes a lot of sense that they could actually try this kind of heist and keep it credible. One running gag is over the false identity Patton’s boss makes him assume, which you might think could ultimately torpedo these plans. ID’d now as famed horror writer Edgar Allan Poe (but misspelled on his tag as “Allen”), Patton’s insecurity at being found out by using such an iconic name becomes the butt of a lot of humor and suspense, proving a brilliant McGuffin in the plot. I laughed out loud. What they have crafted is pure entertainment to spend time with in our own lockdowns, and they pull this off in style.

Production values are strong considering the circumstances, and the fact they got Harrods to break tradition and let a movie crew run rampant through the iconic landmark is very cool, giving the somewhat claustrophobia first act a nice counterpoint with the location change in the film’s second half. Knight’s script comes up with every conceivable joke on living through a pandemic, and surprisingly many of them land. Producers are Michael Lesslie, P.J. van Sandwijk and Alison Winter.

Check out my video review above with scenes from the movie. Do you plan to see Locked Down? Let us know what you think.