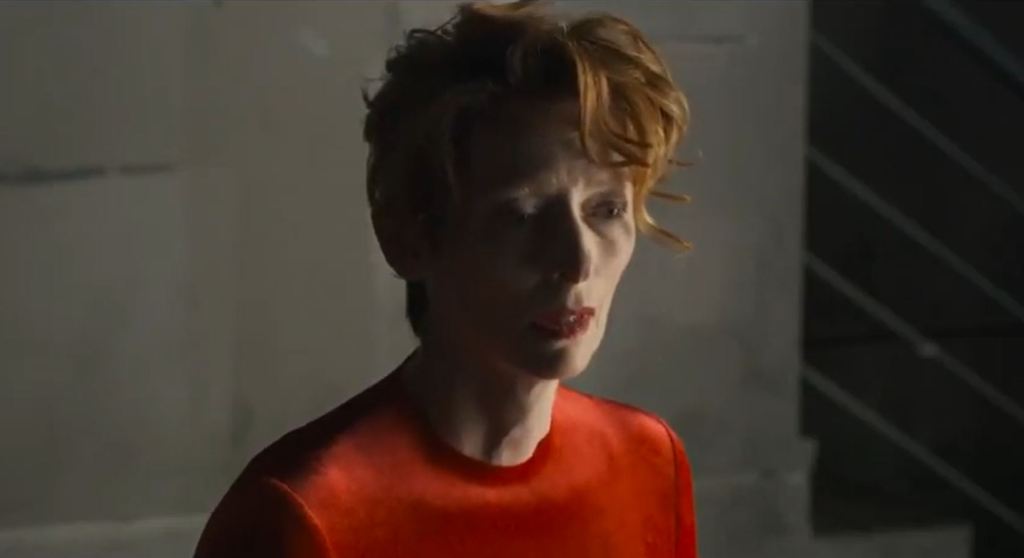 It immediately says something about the differences between Jean Cocteau’s brilliant 1928 dramatic monologue The Human Voice — as first put on screen in 1948 by Roberto Rossellini with the immortal Anna Magnani — and Pedro Almodovar’s new version of it starring Tilda Swinton, that the latter features six costume changes within the first six minutes, while the original was content with a single drab bit of wardrobe.

There are few single-character pieces of 20th century theater as mesmerizing and emotionally intricate as Cocteau’s soliloquy in which a woman spends a half-hour on the phone with her lover coping with the devastating news that he’s about to marry someone else. Swinton indisputably belongs in the select group of actresses who could pull this off, but the ever-arresting Spanish director, in his first English-language outing, is preoccupied with other issues as well, notably the notion of the fine, if not (for him necessarily) definable line between real life and manufactured drama.

Having played the Venice, New York and BFI London Film Festivals, the 30-minute short is a contender for this year’s Live Action Short Oscar category, while a theatrical debut via Sony Pictures Classics is eyed in March.

There are few, if any, contemporary filmmakers as devoted to the precepts of melodrama as is Almodóvar, even as he often upends them and puts them to his own imaginatively perverse use. Cocteau’s creation is straight, unadorned, unembellished drama of a very high order, entirely set in the shabby apartment of a middle-aged woman who has placed her full stack of emotional chips on a man she desperately loves. The monologue, which stretches across two separate calls, sends her to highs and lows of emotion in a gush of feeling that comes from the deepest domains of her heart and soul. The net impact, at least when delivered by a great actress like Magnani, is devastating. (The other high-profile versions of the story starred Ingrid Bergman in 1966 under Ted Kotcheff’s direction for ABC-TV’s Stage 67, and Sophia Loren in 2014 as directed by her son Edoardo Ponti, which was set in 1950s Naples.)

The first we see of Swinton (her character goes unnamed), she’s wearing a flaming red gown against a bare background. A moment later she’s changed into a black outfit and is in a hardware store examining axes — she buys one and takes it home. Upon arrival, she spreads around a bunch of DVDs, one of which, prominently featured, is Kill Bill, sparking concerns that, within minutes, Cocteau is about to be tossed into a blender with Tarantino.

Fortunately, the blade is put to more benign use, but a couple of more costume changes later, she’s taken 13 pills, which are loudly colored in assorted vibrant shades as only Almodóvar could have arranged them; the director dresses her in a simple black leather jacket for this occasion. More pertinent are some overhead perspectives revealing that Swinton resides in an elaborate movie studio set on a soundstage. This at once raises the question of whether she’s enacting some sort of pre-written scenario or, more likely, has slipped over the line into some bizarre alternate existence where her dramatic life has taken over from her real one.

After this dazzling and rather dizzying introduction, Almodóvar has only about 20 minutes left to tell the rest of the story. Instead of being restricted to a phone, Swinton dons earbuds, enabling her to pace unencumbered through her film set “home” as she enthuses about her four years of happiness, her need to keep occupied and, forlornly, how “I’m a waste, I’m a ruin of what I once was.”

Certainly compared to Magnani, whose investment in the role seemed profoundly, tragically deep at every moment, Swinton comes off as more brittle and neurotic, and yet still in control of herself. She nervously searches for quick fixes, for emotional Band-Aids — “I need to invent new habits… I’m a ruin of what I once was,” she ruminates over the phone, but one is not convinced that this is a woman who will allow herself to be emotionally demolished due to the end of a romantic relationship.

To be certain, Swinton is mesmerizing to watch at every moment, but making the character into an eminent actress herself blurs the distinction between the character’s real emotions and those she chooses to express at any given moment; at such brief exposure, we don’t know her well enough to judge whether she’s sincere in her emotional distress or simply a highly skilled game player. Her clearly august professional status also calls into question how sincere she is in her regrets and need for her lover.

On a moment-to-moment basis, Swinton, backed up by her adoring director, cinematographer (José Luis Alcaine), costume designer (Sonia Grande) and cinematographer (Alberto Iglesias), delivers a can’t-take-your-eyes-off-her performance as a woman who, unlike Cocteau’s original, is accomplished, recognized and, more than likely, accustomed to getting what she wants. Without her lover, she still has a lot going for her, unlike Cocteau’s creation. With Magnani, the character is demolished, as is the viewer. With Swinton, you’re willing to bet she’ll be turning the page not too many more wardrobe changes from now.