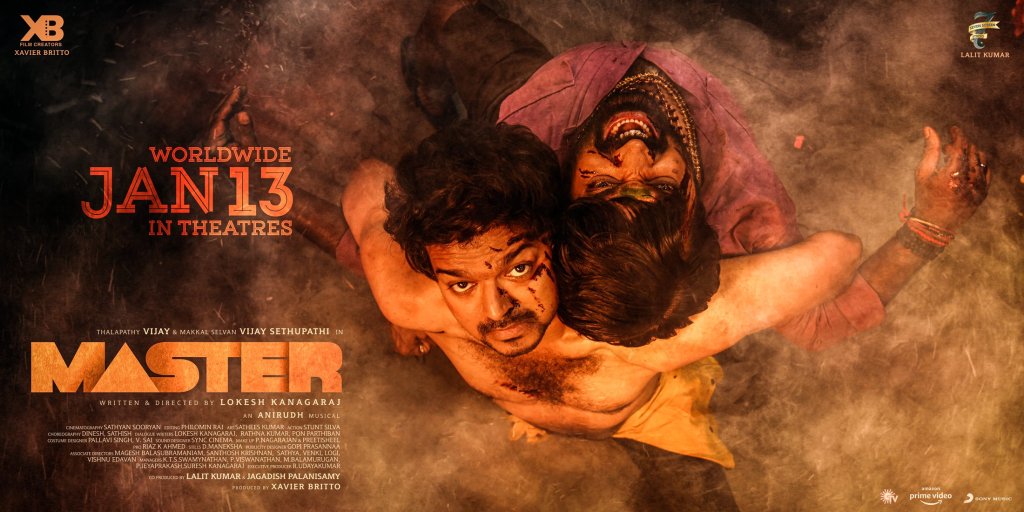 Refresh for latest…: Fans of Kollywood cinema got a treat this weekend as Tamil action thriller Master debuted in India and a handful of other markets across the harvest festival period. While we do not have confirmed figures for the Vijay-starrer in India, estimates had it at around $11M from Wednesday-Friday with the film believed to have crossed the coveted Rs 100 crore ($15M) gross mark over the weekend. Bows in such international box office markets as UAE, Australia, Singapore and New Zealand, along with the U.S., added about $3M (including previews) for the film from director Lokesh Kanagaraj.

Now, as we always caution, it is notoriously difficult to cull early numbers out of India given its varied states and reporting structure — which in some cases is gross and in others net after the subtraction of an entertainment tax. The situation is further complicated when a movie releases in four different language versions as is the case with Master (Tamil, Telugu, Kannada and Hindi). We will update when the picture becomes clearer.

In Australia, Master did an estimated $470K through Saturday and in New Zealand that figure was $89K through Sunday. Singapore, where the movie was tracking at No. 1, is estimated to be over $750K for the weekend. The U.S. did about $350K including previews that began on Tuesday. For the four-day MLK holiday domestically, it’s at No. 8. The UAE sold an estimated 133K tickets for an approximate debut of $1.3M. A local source notes that fans “have been cut off from these films for a long, long time. This is encouraging.”

Master is the first major Indian title to hit big screens since the start of the pandemic, and hopes had been pinned on it to help revive the local box office after a long lockdown period. Given India’s cinemas have 50% capacity restrictions, the estimated performance is impressive — we understand that Master’s opening day locally was off just 20% from Vijay’s 2019 hit Bigil. The movie may end up frontloaded, but it shows how avid Indian audiences are when it comes to their homegrown titles and stars — and it offers promise for future key releases. Images from the market, particularly the state of Tamil Nadu and its capital Chennai, demonstrated a frenzy among moviegoers to get back to cinemas.

In studio play, Disney/Pixar’s Soul continued its strong run in China, dropping just 39% from last weekend. It’s now the third highest-grossing Pixar release of all time in the Middle Kingdom with an estimated $43.1M.

Warner Bros’/DC’s Wonder Woman 1984 crossed $100M overseas this week. It added $5.2M from 41 markets in the current session to bring the offshore cume to $105.9M for $141.7M worldwide (including $11.3M from IMAX). The Gal Gadot-starrer officially bowed in Russia this frame, following previews last week, and grossed $2.6M at No. 2 behind Disney’s local sequel The Last Warrior: Root Of Evil, which had made $24.5M through Saturday. Russia’s cinemas are operating at 25% seating capacity.

Australia had a strong hold on WW84 with a 31% drop from last weekend to cume $16.1M and Brazil also held well (-32%) for $5.4M to date. WB plans to release a number of smaller markets in the coming weeks with the remaining majors currently on hold due to COVID restrictions.

DreamWorks Animation/Universal’s The Croods: A New Age picked up another $2.2M in 17 markets for a 55% dip. The offshore cume is $94.7M for $135M global. Australia is the lead market at $12.1M (down just 26% from the previous session), and is followed by Russia with $11.7M, surpassing the original film’s lifetime.

Elsewhere, China added two new movies this session but still gave preference to A Little Red Flower which was No. 1 again in the market and has cumed $182M through Sunday. Shock Wave 2 (see our review, here) came in 2nd again, having now grossed $164M, including $19M from IMAX. Freshman entries The Soul (not to be confused with the Dis/Pixar film) and Jackie Chan-starrer Wish Dragon did $9.6M and $7.2M, respectively.

Paparazzi photo in Harry and Meghan trailer taken at premiere years before they met
Why Silicon Valley is so hot on nuclear energy and what it means for the industry
Christopher Eccleston: ‘Patriarchy cocks everyone up… It did its damage to me too’
New York’s ‘Stomp’ To Close After 29-Year Run As Off Broadway Mainstay
Jackie Chan, Spike Lee, Nadine Labaki Head To Saudi Arabia’s Red Sea Fest For High-Profile In-Conversation Line-up