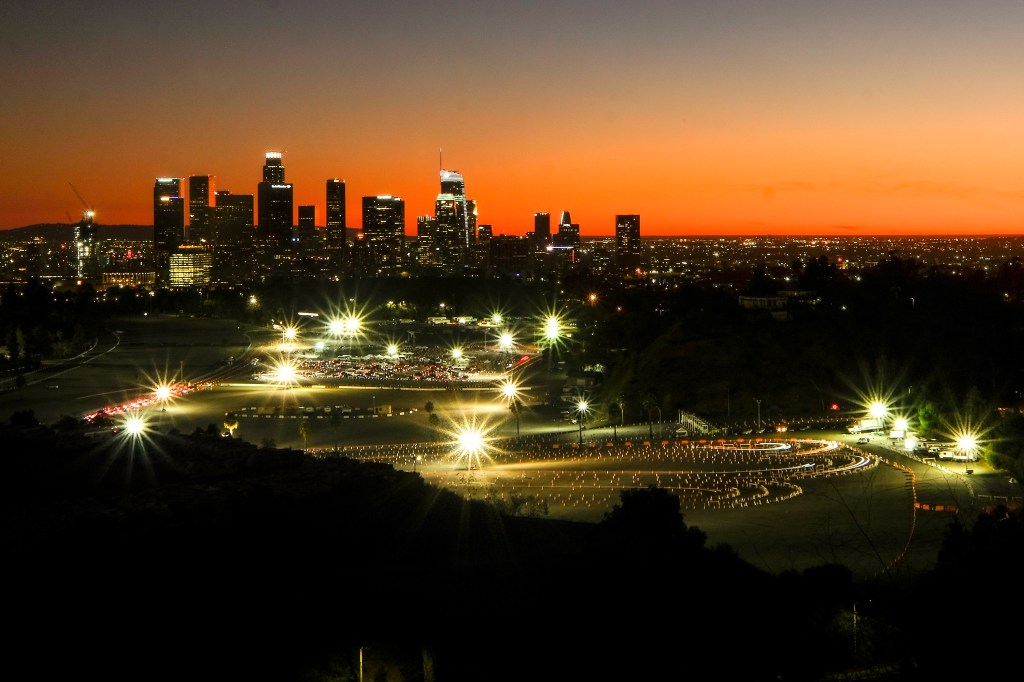 Speaking from Dodger Stadium, which he proposed was the country’s — and possibly the world’s — “largest Covid-19 vaccination site,” Los Angeles Mayor Eric Garcetti announced that Los Angeles’ five vaccination sites have already administered vaccines to more than 80,000 people. The mayor said that, on Wednesday alone, the Dodger Stadium facility delivered a staggering 7,730 doses.

“The last person exited here, I think about 11 [p.m.],” said the mayor indicating that, with lines still snaking out the lot, those running the site decided to keep the gates running past closing time. We probably did more vaccinations here than anywhere probably in the county if not the world.

Garcetti also revealed that, by the end of the day tomorrow, LA will be finished vaccinating all residents of skilled nursing facilities.

Those are significant achievements, but they have not gone off without a hitch.

Garcetti admitted that many at Dodger Stadium waited hours on Wednesday to get vaccinated. One senior told Deadline he waited four hours in line. While the mayor insisted the wait time on Thursday was no more than an hour and averaged about 30-40 minutes, he apologized to those who waited on Wednesday.

Still, Garcetti urged Angelenos to gas up their cars, bring snacks and use the bathroom before getting in line at Dodger Stadium.

One resident who likely did not have to wait four hours was former California Governor Arnold Schwarzenegger, who tweeted a video of his Dodger Stadium vaccination on Wednesday. Arnold did quip, “I have never been happier to wait in a line.”

Today was a good day. I have never been happier to wait in a line. If you’re eligible, join me and sign up to get your vaccine. Come with me if you want to live! pic.twitter.com/xJi86qQNcm

The site’s initial goal was to deliver 12,000 doses a day, and Garcetti indicated that is still the target — it must be. Garcetti said that at Los Angeles’ current vaccination pace, all healthcare workers and seniors wouldn’t be inoculated until June if the pace didn’t pick up.

Garcetti indicated that there are currently two lines of cars that roll through Dodger Stadium. The plan is to add a third queue to speed things up.

He made a plea to state and federal officials for more doses before saying, “Demand still far outstrips supply. We are still waiting to learn how many doses are coming.”

Join me live from @DodgerStadium for an update on our efforts to vaccinate every Angeleno as quickly as possible. https://t.co/Zq6OVmVRlA

Los Angeles County Director of Public Health Barbara Ferrer said Wednesday that the county expects to receive about 143,900 more doses of the vaccines next week. However, since people need to receive two
doses of the medication, spaced three to four weeks apart, the bulk of the vaccine coming next week will be used to administer second doses to people who have already received the first shot.

She estimated that only 37,900 of the doses coming next week will be available for people to receive their first dose.

“This is what I mean by a serious supply problem,” she said. “We just are not receiving enough vaccine doses to move as quickly as we and you would like us to.”

She said that as of the end of last week, the county had received 685,000 doses, with 307,000 used so far for first doses and 87,000 for second doses. The county is still working to complete vaccinations of hundreds of thousands of health care workers with remaining doses, even as it expanded access to people 65 and older this week.

LA County Public Health confirmed on Thursday 262 new deaths and 8,512 new cases of confirmed Covid-19. “The last time we had two days of under 10000 cases was early December,” noted the mayor. “This is progress.”

There were 7,263 people hospitalized with Covid-19 on Thursday. Garcetti said that is 7% less than last week.