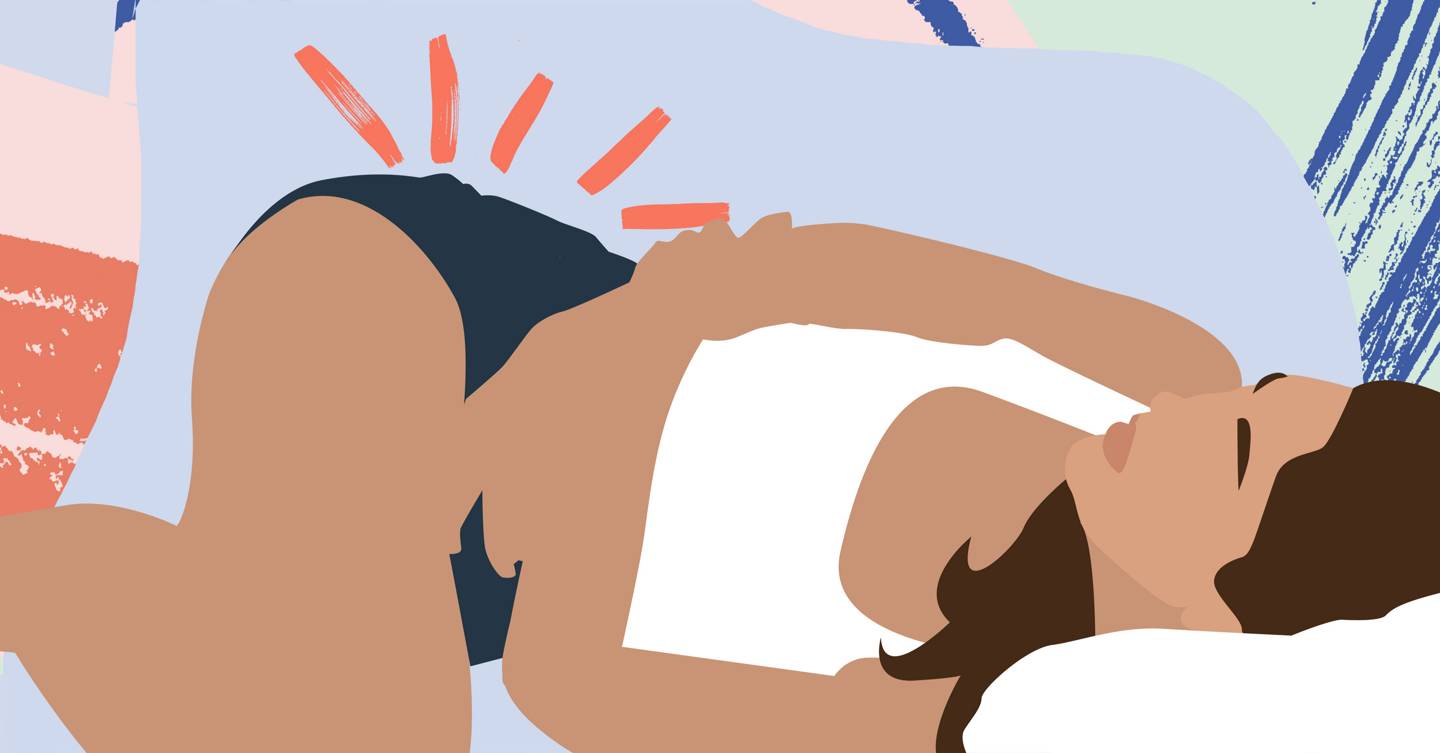 As soon as I got my first period at 12 years old, I knew something wasn’t right.

Alongside terrible back pain, the flow was unbelievably heavy and totally uncontrollable. I’d wear multiple pads at a time, and it still wasn’t enough to really keep me protected. Eventually, the amount of blood I was losing led to anaemia. I was exhausted, terrified and barely even a teenager.

My mum took to me to see my GP who immediately put me on the progestogen-only pill (‘mini pill’) that stops your periods altogether. This worked for a while, except the mood swings were horrible. I became depressed. After four years, I decided enough was enough; that there must be another way. So I came off the pill.

And then my period came back. The pain – excruciating, not like anything I’d ever experienced before – literally took my breath away. I collapsed to the floor in agony.

‘Endometriosis took away my dreams of having a big family’: A sufferer shares her candid story of living with the debilitating illness

After looking up my symptoms online, I suggested to my GP that it could be endometriosis, but it was shrugged off. Eventually, after months of pestering, I was referred for an ultrasound – but endometriosis doesn’t show up on scans, so the results came back clear.

Doctors told me I was ‘trying to find answers that weren’t there’, that I was being dramatic. That they were more concerned about my mental health; basically, that it was all in my head. I was prescribed antidepressants (which of course, I knew I didn’t need). I had more mental health referrals than I had scans on my ovaries.

I even started to wonder if the doctors were right; maybe it was all in my head?

From then on, I was petrified of my period and the unbelievable, crippling pain it would bring every month. But I just tried to get on with it, and I even started to wonder if the doctors were right; maybe it was all in my head?

Then came the August bank holiday weekend in 2019. On Friday evening, the usual pain started to set in and I stopped being able to pass urine which I thought was strange, but I’d just got used to telling myself to get on with it.

But by Monday, I was in a level of pain I’d never felt before. I couldn’t stand. I fell to the ground unable to breathe and desperately called out for my parents. Soon, all I could hear was my heart rate and everything started to fade out of focus. I remember saying, ‘Dad, I think I’m dying’.

My mum called an ambulance but because of the bank holiday, they said there would be a four-hour wait.

‘I’m not going to make four hours, they need to come now,’ I said.

The paramedics turned up shortly after and rushed me to the ambulance, saying that my blood pressure was dangerously low, and that’s the last thing I remember.

As a new report calls for ‘urgent improvement’ to endometriosis care, a doctor answers our questions about the debilitating condition

After a week in hospital on strong IV antibiotics, an MRI finally diagnosed a seven-centimetre endometrioma – a cyst on my ovary – that had essentially fused my organs together and become dangerously infected. The doctor told me that if I hadn’t come to hospital when I had, the sepsis likely would have killed me.

My endometriosis was diagnosed as stage four – the most severe stage, due to the level of cysts and scarring across my reproductive organs – and I was referred to a specialist centre where I underwent surgery to remove the endometrioma.

But by March 2020, the excruciating pain had returned. I thought, ‘I cannot do this again’. By this point, the pandemic had taken its toll and we were in lockdown, so I arranged a Zoom consultation with a private specialist in Surrey who was highly recommended. He booked me in for an emergency MRI straight away.

“You have a huge endometrioma cyst on your left ovary,” he told me. “The cyst is 18cm big.”

The cyst was so huge that it was affecting the nerves in my pelvis, bladder and ureter and putting pressure on my kidneys.

“You need to have the cyst removed urgently, otherwise you could lose your kidney,” the doctor said. “I’ll do everything I can to save your ovary.”

Because most NHS surgeries were cancelled due to the pandemic, I had to go private. By the time I had surgery, the endometrioma on my ovary had grown into an enormous 25cm cyst. It had been blocking the ureters to my kidneys which were now released, and cysts were also covering my right ovary, my bladder, my pelvis and the outside of my bowel. But thankfully, the surgeon managed to save all of my organs, including both my ovaries.

By the time I had surgery, the endometrioma on my ovary had grown into an enormous 25cm cyst

Now, I’m being trialled on another contraceptive pill to try and control my periods, but as there is no cure for endometriosis, I live in everyday pain and try to manage as best I can. My fertility isn’t looking great. I just hope all the time for some sort of relief.

But because my endometriosis was left to develop to such a severe state, my chances of living a normal, pain-free life are slim.

I wish we spoke more not only about the debilitating illness that is endometriosis, but about the Gender Health Gap because I am evidence of its existence, and it is risking women’s lives.

My advice to any other women out there who are being let down by the Gender Health Gap is to not take ‘no’ for an answer. Listen to your body, and don’t let anyone gaslight you into thinking that it’s ‘all in your head’. You know your body better than anyone. Fight for its right to be heard.

‘Avatar: The Way Of Water’ Moves Up To No. 4 Biggest Movie Ever Global, Leaving ‘Force Awakens’ In Its Wake
No 10 insists UK economy is strong despite IMF warning it will fare worse than any other in developed world – including Russia
‘Jackpot’: Nicholas Stoller Limited Series About Gambler-Turned-FBI Source RJ Cipriani In Works At Sony TV
Sunak urged to ‘come clean’ over what he knew about Zahawi tax scandal
PM was told of Raab’s ‘unacceptable behaviour’ before appointing him to cabinet