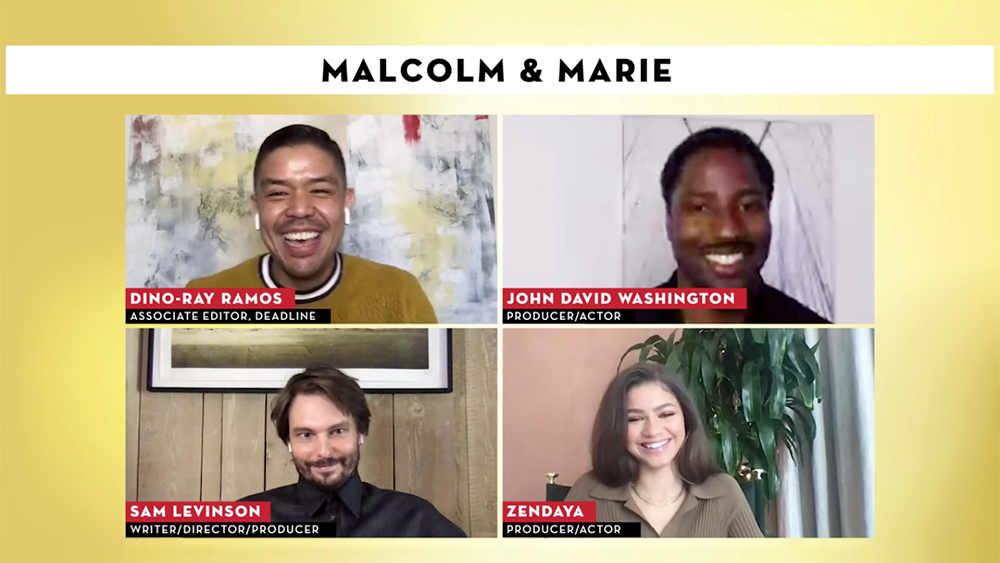 The Netflix drama Malcolm & Marie, from Euphoria creator Sam Levinson, was one of the first — if not the first — movie that was shot during the coronavirus pandemic. The idea for the movie surfaced after Euphoria shut down production, and Levinson had a conversation with his Emmy-winning star Zendaya about the possibility of making a film during a time when Hollywood was pretty much on hiatus, and Levinson felt a responsibility to get his crew back to work.

“We sort of had to reverse engineer it in a way,” Levinson says during Deadline’s Contenders Film awards-season event, where he was joined by co-stars Zendaya and John David Washington. He explains that he wanted to have solely the two actors, and that at the time the only place they could shoot was in Carmel — the only place in California where one could shoot without a permit on private property.

The film follows the titular couple as they return home from a premiere of Malcolm’s movie. As he waits to see whether his film is a success, things take a turn as revelations about their relationship begin to surface, testing the strength of their love.

“We knew there were certain obstacles we would have to overcome from a pure narrative perspective,” Levinson says. “It would be two actors, one house and the idea [came from] my own life. It may be true that I forgot to thank my wife once at a premiere — which ended up being the jumping-off point for this relationship piece that continues to unravel from there.”

Levinson says he wrote the role of Marie for Zendaya based on what he knew about her as a person; she liked the challenge and was on board from the very beginning. “There were a lot of ideas that went around…and some of them I wasn’t a huge fan of,” Zendaya says, laughing. “He hit me with [Malcolm & Marie] and I immediately fell in love with the challenge [and] the possibilities of what could happen — and this idea of coming into my womanhood as an actress.”

When Levinson wrote Malcolm, he said he could only hear one person’s voice for the role and it was Washington’s. The two-hander is dense with dialogue and emotion that emits Who’s Afraid of Virginia Woolf? energy; there’s nothing to hide behind. Washington feels it was equal parts frightening and liberating as an artist.

“To immerse the two and make it a thought and experience cinematically — I leapt at the chance,” Washington says. “Sam is a brilliant writer, one of the best around, and he beautifully crafted this exhibition of a multi-dimensional relationship.”

Check back for the panel video.