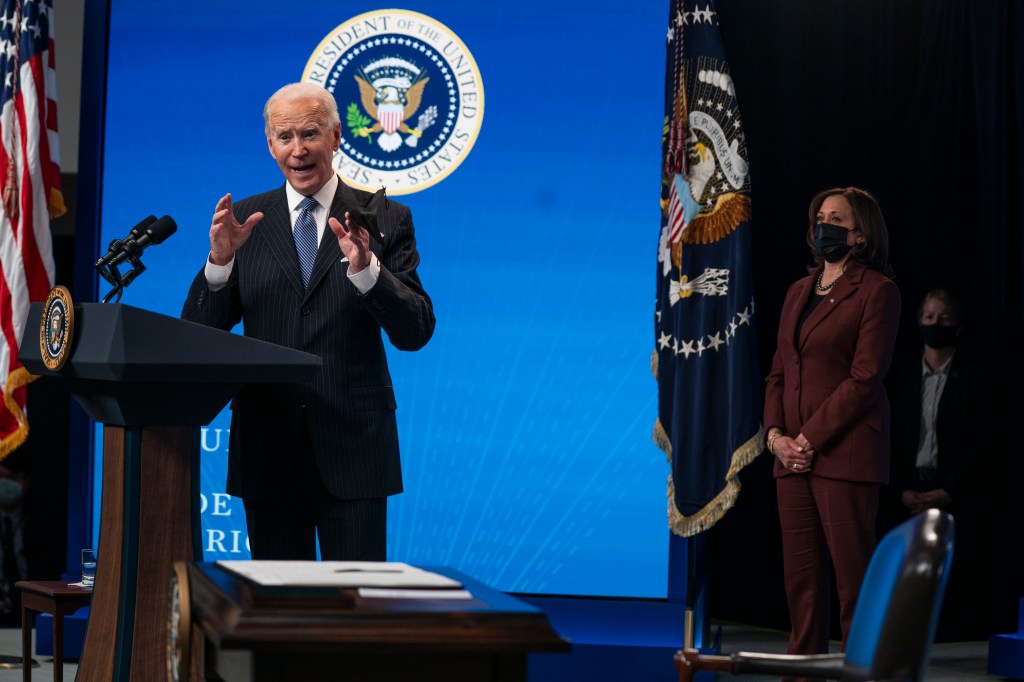 President Joe Biden said that anyone who wants a Covid-19 vaccine should be able to get one by this spring, while he said that he thinks the U.S. may be able to get to 150 million shots in his first 100 days in office.

“I think we will be able to do that this spring,” Biden told reporters. “But it is going to be a logistical challenge that exceeds anything we have ever tried in this country, but I think we can do that.”

He said that he feels confident that by this summer “we are going to be well on our way to herd immunity and increasing the access for people who aren’t first on the list and going all the way down the children.”

Biden has faced questions of whether his administration’s initial goal — of 100 vaccinations in the first 100 days — was too modest. Biden suggested that the U.S. could be surpassing 1 million shots per day in the near future.

Biden’s appearance before reporters gave a glimpse of how he will interact with the media as president compared to Trump. His predecessor didn’t miss many opportunities to bash the press and to spar with individual reporters, but he sometimes took questions multiple times during the day.

Biden is expected to interact with the press much more sparingly, and while he has gotten prickly with reporters, he hasn’t treated them as the opposition party.

As aides were trying to wrap up the event with Biden, the president took one last question from Peter Doocy, Fox News’ new chief White House correspondent who covered his campaign.

“I know he always asks be tough questions, and he always has an edge to them, but I like him anyway,” Biden said as he called on Doocy.

Doocy asked him, “Now that you are president, and you are saying there is nothing we can do to change the trajectory of the pandemic in the past several months. What happened to two months ago when you were talking declaratively about, ‘I am going to shut down the virus’?”

Frank Sinatra Stage Musical In Works With ‘Diana’ Writer Joe DiPietro And Triple Tony Winner Kathleen Marshall
‘We cannot let Faye’s life end here’: Campaign to save young star fighting rare brain tumour
25 New Year’s makeup ideas to ring in 2023 in style
Broadway’s Susan Stroman Wants London To Go Wild Over ‘Crazy For You’ Again – This Time With West End Star Charlie Stemp
Matt Hancock Finishes Third In ‘I’m A Celebrity… Get Me Out Of Here!’ After Dividing The Nation For Three Weeks, As Finale Watched By Peak Of 11.3M