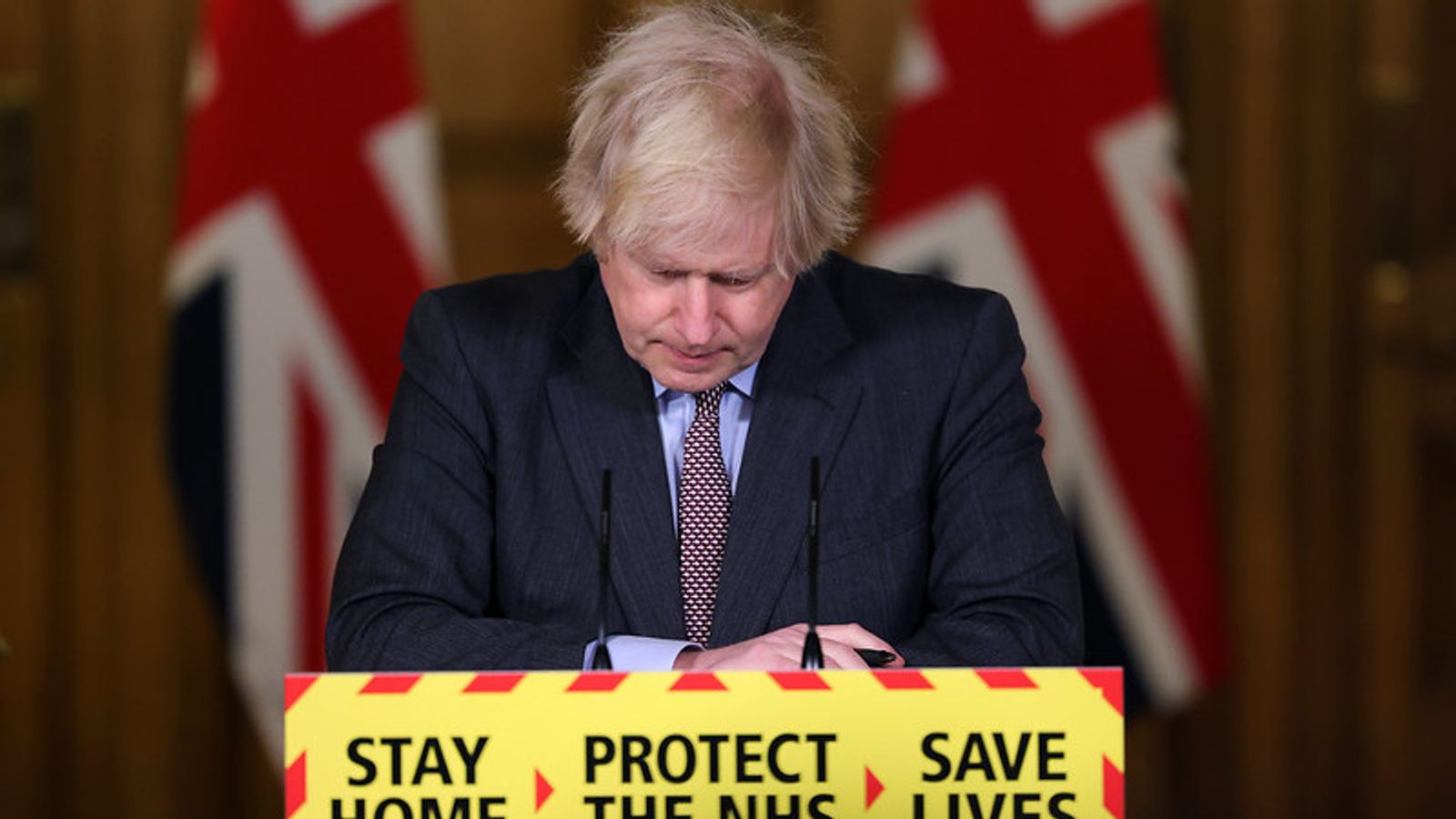 Boris Johnson has told the country he is “deeply sorry for every life that has been lost” as the UK surpassed 100,000 coronavirus-related deaths.

A further 1,631 people were reported to have died within 28 days of testing positive for COVID-19 on Tuesday, taking the total number of deaths since the start of the pandemic to 100,162.

Speaking at a Downing Street news briefing, the prime minister said it is “hard to compute the sorrow contained in that grim statistic” and described it as an “appalling and tragic loss of life”.

“I think on this day I should just really repeat that I am deeply sorry for every life that has been lost and, of course, as I was prime minister I take full responsibility for everything that the government has done.”

Mr Johnson offered his “deepest condolences to everyone who’s lost a loved one: fathers and mothers, brothers and sisters, sons and daughters, and the many grandparents who have been taken.”

Live coronavirus updates from the UK and around the world

On 11 November last year, the UK had recorded 50,000 coronavirus-related deaths. It has taken just 76 days for that figure to double.

At the news briefing, Mr Johnson said the government “did all it could” to mitigate the high death toll.

Chief Medical Officer Professor Chris Whitty described it as a “very sad day”, but warned: “Unfortunately we’re going to see quite a lot more deaths over the next few weeks before the effects of the vaccines begin to be felt.”

“I think we have to be realistic that that is going to happen,” he added.

Health Secretary Matt Hancock described the figures as “heartbreaking” and said he “knows how hard this year has been”.

“My thoughts are with each and every person who has lost a loved one – behind these heartbreaking figures are friends, families and neighbours,” he said in a statement.

Dr Yvonne Doyle, medical director at Public Health England said it was a “sobering moment in the pandemic”, but that “we should be encouraged that hundreds of thousands of people are receiving a vaccine every day”.

Today’s government figures were released after the Office for National Statistics (ONS) – which uses a different counting method – published its own data, which suggested deaths had already passed 100,000.

Meanwhile, another 20,089 people tested positive for the virus on Tuesday – the lowest daily rise in cases so far this year.

Case numbers suggest that lockdown measures are working, particularly in London and the South East, Professor Whitty said on Tuesday, but experts have urged ministers not to ease restrictions too soon and risk another spike.

Almost all of the UK is currently in lockdown to prevent the NHS being overwhelmed – nearly a year since the first official case of coronavirus community transmission was discovered.

On 17 March, the government’s chief scientific adviser Sir Patrick Vallance said keeping the number of deaths under 20,000 would be a “good outcome”.

There were unprecedented interventions as people were told to “stay at home”, the Queen issued a rare national address and Prime Minister Boris Johnson warned: “Many more families are going to lose loved ones before their time.”

But questions were already being asked about whether lockdown had come too late.

Mass gatherings, including a Stereophonics concert, the Cheltenham Festival and a Liverpool versus Atletico football game held on Merseyside, all prompted concern about how the virus spread so quickly.

And it was revealed Mr Johnson missed five meetings of COBRA – the government’s emergency response committee – before March.

In the weeks ahead, the UK hit its first peak of daily deaths – 1,073 – on 8 April and then cases – 4,825 – on 21 April, with the prime minister himself catching the virus and being treated in intensive care.

Reports of personal protective equipment shortages also broke out, with health workers warning they did not have adequate equipment to treat patients – particularly in care homes.

And the prime minister’s top adviser Dominic Cummings was found to have potentially breached lockdown rules after travelling to his parents’ farm in Durham with his wife and young child – and then driving to Barnard Castle to apparently test his eyesight.

In the summer, “travel corridors” were introduced to force anyone arriving in the UK to quarantine, unless they came from a list of exempt countries.

Face coverings also started to be required in some public places, and Mr Johnson told people working from home they should start going back to the office.

Then as autumn arrived, cases began shooting up again – rising above 2,000 a day on 1 September for the first time since May.

What was once a national approach began to fragment, with the creation of tiers and different nations in the UK taking different approaches – Wales notably entering a “firebreak” while Mr Johnson was defying calls for similar action in England.

But he then decided to order a second national lockdown for November, which saw a dip in cases and deaths that quickly reversed as soon as it lifted.

Hopes for a vaccine were boosted with the medicines regulatory approving first the Pfizer/ BioNTech jab, then the Oxford University/ AstraZeneca one, and finally Moderna.

But when new year arrived, all four nations of the UK ordered another lockdown. Uncertainty remains over how long it will last.

Gaming’s Oscars night is upon us – here are our picks for the top awards
Vicky Krieps Talks About The Physical Pain Of Getting Into Character For ‘Corsage’ – Contenders International
Fleetwood Mac’s Christine McVie Dies at 79
Here’s How To Find The Eyebrow Shape To Suit Your Face Shape
Astra chief engineer resigns, CEO shakes up management ‘to execute faster’