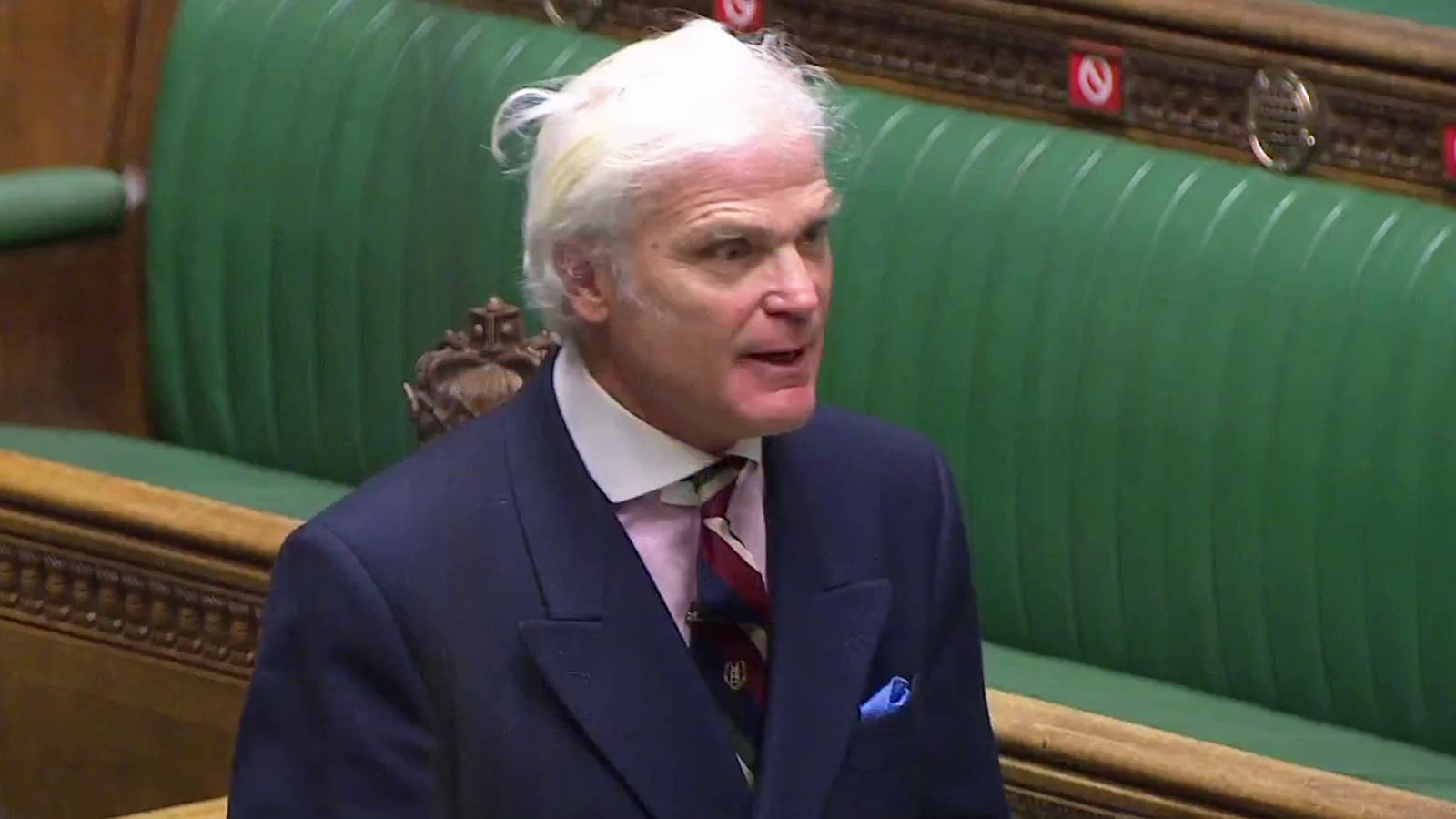 A Tory MP who urged anti-vaccination campaigners to keep going with their fight against coronavirus restrictions and told them NHS capacity figures were being “manipulated” is “wrong” and “completely out of order”, a senior minister has said.

However, the Cabinet Office minister would not be drawn on whether he should lose the Conservative whip.

Sir Desmond told Sky News he would not apologise for telling a group – who say vaccines are dangerous – to “persist” with their campaign against COVID-19 restrictions.

During an interview in November with Save our Rights UK, obtained by Sky News, he said: “It seems to be a manageable risk, particularly as figures have been manipulated… We’re told there is a deathly, deadly pandemic proceeding at the moment.

He also told the group, which has previously advanced false claims about COVID vaccines, in the interview: “As the last (House of Commons) Speaker used to say, (John) Bercow, he’d say ‘Persist! Persist!’ That’s my advice – persist.

There is no evidence of data being manipulated, and at the time of the MP’s comments, deaths were 14% above the five-year average – according to the Office for National Statistics.

Mr Wakefield is a former doctor who was struck off the UK medical register for a discredited study linking the MMR vaccine to autism.

In this interview, Sir Desmond claimed Britain had become “a police state” and accused the government of attempting to implement “social control”, while the anti-vaxxer praised the MP as a “hero”.

He said: “There are aspects of this (the government’s actions) which I’m certain come down to social control, like the wearing of masks, the medical case you’ve just rubbished it earlier this evening.”

When Sky put these comments to Sir Desmond, he said he had never heard of Del Bigtree.

He also doubled down on the comments about masks, saying he regards it as a matter of “social control”.

The New Forest West MP added he was entitled to make his point of view on any platform.

“I’m entitled to answer legitimate questions that people put to me,” he said.

“It does not in any way mean that I accept points of view that they hold.”

Over three nights Sky News will host a series of special programmes examining the UK’s response to the pandemic.

Watch COVID Crisis: Learning the Lessons at 8pm on 9, 10 and 11 February

Jackie Chan, Spike Lee, Nadine Labaki Head To Saudi Arabia’s Red Sea Fest For High-Profile In-Conversation Line-up
Wednesday Addams Makeup Is Trending On TikTok – Here’s How To Do It
Man behind the Korean wave talks about the future of K-pop and what aspiring artistes can do
Some Meta employees claim they’re not getting promised severance
Avatar is back after 13 years – but will the sequel live up to the original?