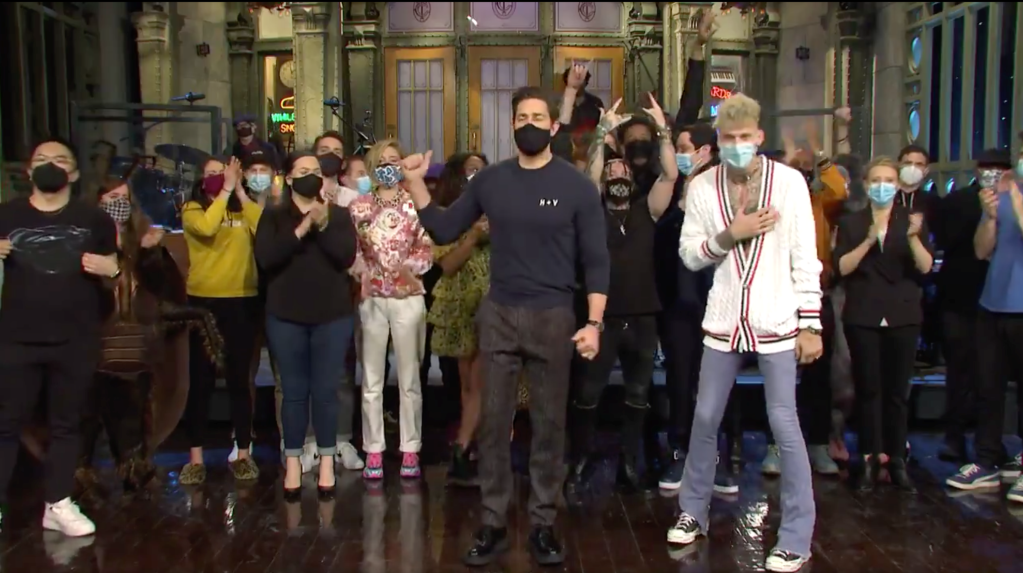 The Jan. 30 show was on par with SNL‘s last original before the winter break, the The Christmas-themed Dec. 19 episode hosted by Kristen Wiig with musical guest Dua Lipa, which drew a 4.4 HH and 2.1 18-49 L+SD ratings, and was above the other two December telecasts, Dec. 12 (4.3 in HH) and Dec. 5 (4.1 in HH). Understandably, SNL’s ratings were higher in the fall, leading to and immediately following the Presidential election.

In its first episode after the lengthy hiatus, SNL covered some of the biggest stories from the last month and a half, from the Capitol insurrection to the GameStop stock chaos and Tom Brady’s return to the Super Bowl. The show marked the return of cast member Aidy Bryant after three and a half months. It also featured a lot of synergies, with Krasinski revisiting his show The Office twice, in the opening monologue and in a skit featuring “lost” theme songs. The Office just started streaming on Peacock after NBCUniversal moved it from Netflix in a massive deal.

Buoyed by the election coverage, the current season of SNL — the show’s best since the conclusion of last election cycle four years ago — for the first time in its 46-year history is #1 among all comedies on broadcast and cable in Live+7 18-49 and total viewers.

In social interactions, this season’s SNL is up 48% vs. last season. The Oct. 3 cold open of the first presidential debate has drawn 30.2 million views, more than nearly four times the highest of last season.

Of the videos from last night’s episodes, garnering most views as of Sunday morning are the Cold Open, Weekend Update with the My Pillow CEO appearance spoof, Krasinski’s opening monologue and a skit featuring Krasinski as a business pundit with twins straight out of The Shining. You can watch it below:

Next week, Schitt’s Creek’s Dan Levy will make his SNL hosting debut, and Phoebe Bridgers will perform as musical guest for the first time.

Democrats urge Google to stop collecting location data that could be used to identify people seeking abortions
‘This Is Us’ Series Finale Grows To 6.4 Million Total Viewers, 1.3 Demo Rating – Update
Only Fools And Horses star announces his lung cancer is ‘cured’
Hyundai plans $5 billion investment in U.S. on mobility technology such as autonomous driving and robotics
Director Alice Winocour Chronicles The Journey Of A Woman Recovering From A Terrorist Attack In Her New Film ‘Paris Memories’ – Cannes Studio