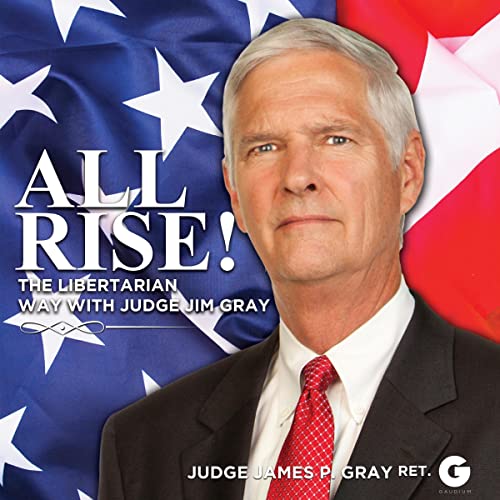 Judge Gray reveals how liberty is intertwined in our country’s genes, taking us all the way back to when the Pilgrims first landed on Plymouth Rock. All Rise! unfolds alongside Judge Gray’s life and upbringing and explores the experiences that spurred his path toward independent thought. The voices of those closest to him are materialized in exclusive interviews, revealing a rare and nuanced look at Judge Gray throughout various points in his life. How did Judge Gray, a former Congressional candidate and member of the Finance Committee of the Republican Party of Orange County, California lean into Libertarianism in only 13 seconds? See how he has been an involved and passionate member of the Libertarian Party ever since that whip-quick decision, and travel with him through his subsequent campaigns as a Libertarian for US Senate in 2004, Vice President in 2012, and President in 2020.

Join Judge Gray on his mission to mainstream the word “Libertarian” – not simply the word, but the party’s values, approaches, and principles. Direct and frontal attacks on our freedoms and liberties are unacceptable, and Judge Gray’s platform offers an antidote to the continual trespassing of an overzealous government on its citizens. All Rise! also demonstrates how the government has failed to run economies throughout history, and how it is failing to perform under today’s duress, which will leave a legacy of debt to our children and grandchildren! Judge Gray, a recipient of the 2019 Judge Franklin G. West Lifetime Achievement Award from the Orange County Bar Association, argues that there is a solution: Employ responsibility, and employ liberty!

All Rise! The Libertarian Way with Judge Jim Gray provides us all with an inside look at Judge Gray’s ideological transformation, giving a clear overview of Libertarianism, the values it holds for America, and how it stands to unite us, which is precisely what we need in these divisive and frustrating times.

The official website for Beacon Audiobooks may be found at http://www.beaconaudiobooks.com