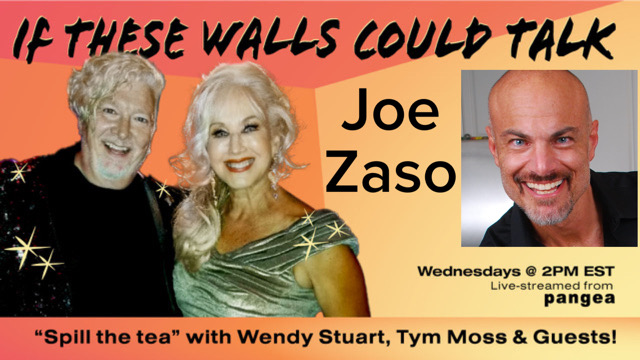 Who else but hosts Wendy Stuart and Tym Moss could “spill the tea” on their weekly show “If These Walls Could Talk” live from Pangea Restaurant on the Lower Eastside of NYC, with their unique style of honest, and emotional interviews, sharing the fascinating backstory of celebrities, entertainers, recording artists, writers and artists and bringing their audience along for a fantastic ride.

Joe Zaso will be a featured guest on “If These Walls Could Talk” with hosts Wendy Stuart and Tym Moss on Wednesday, January 5th, 2022 at 2 PM ET live from the infamous Pangea Restaurant.

Wendy Stuart is an author, celebrity interviewer, model, filmmaker and hosts “Pandemic Cooking With Wendy,” a popular YouTube comedic cooking show born in the era of Covid-19, and TriVersity Talk, a weekly web series with featured guests discussing their lives, activism and pressing issues in the LGBTQ Community.

Tym Moss is a popular NYC singer, actor, and radio/tv host who recently starred in the hit indie film “JUNK” to critical acclaim.

Joe Zaso is an actor of stage and screen, model, cookbook author and chef based in New York.  He is known by the press as a “Horror Himbo” because he is a veteran of many horror films including Virus X, 5 Dead on the Crimson Canvas and Nikos the Impaler.  His non-horror credits include The Wolf of Wall Street, the Off-Broadway production of Charles Busch’s Cleopotra and an upcoming crime docudrama for Fox Nation.  His experiences in horror films and his love of cooking merged and he soon became the author of 7 cookbooks under the name of Cafe Himbo.

Watch Joe Zaso on “If These Walls Could Talk” with hosts Wendy Stuart and Tym Moss on YouTube here:

Subscribe and listen to “If These Walls Could Talk” on Apple Podcasts/iTunes here:

No new measures to help with cost of living after crisis talks between PM and energy bosses
Mike Tyson Takes A Jab At Hulu Ahead Of ‘Mike’ Series Premiere: “They Stole My Life Story & Didn’t Pay Me”
NASA’s Mars Reconnaissance Orbiter Spots “Ear” of the Red Planet
Broadway’s ‘The Kite Runner’ Sets Friday Performances For Masked Audiences Only
Book Fetish: Volume 491