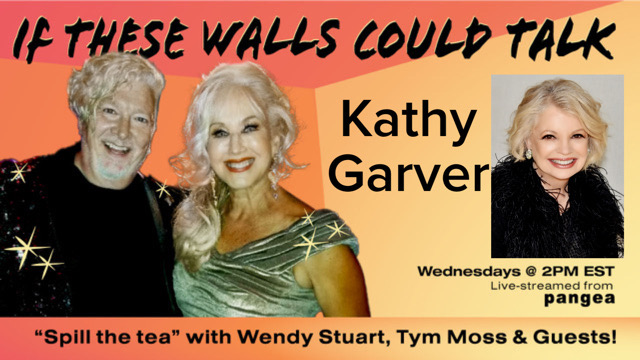 Who else but hosts Wendy Stuart and Tym Moss could “spill the tea” on their weekly show “If These Walls Could Talk” live from Pangea Restaurant on the Lower Eastside of NYC, with their unique style of honest, and emotional interviews, sharing the fascinating backstory of celebrities, entertainers, recording artists, writers and artists and bringing their audience along for a fantastic  ride.

Kathy Garver will be a featured guest on “If These Walls Could Talk” with hosts Wendy Stuart and Tym Moss on Wednesday, April 13th, 2022 at 2 PM ET live from the infamous Pangea Restaurant.

Wendy Stuart is an author, celebrity interviewer, model, filmmaker and hosts “Pandemic Cooking With Wendy,” a popular YouTube comedic cooking show born in the era of Covid-19, and TriVersity Talk, a weekly web series with featured guests discussing their lives, activism and pressing issues in the LGBTQ Community.

Tym Moss is a popular NYC singer, actor, and radio/tv host who recently starred in the hit indie film “JUNK” to critical acclaim.

Her professional acting career began when she was just seven years old appearing in TV westerns, sit coms, and dramatic programs such as Climax and Matinee Theater.  When she was eight years old, Hollywood legendary director Cecil B. DeMille recognized Kathy’s distinct talents.  Originally hired for a small part in the epic motion picture, The Ten Commandments, Kathy was noticed by the great director who then had special scenes written into the movie to highlight the talented little girl.  The award-winning movie followed her first film, The Night of the Hunter, directed by Academy Award winner, Charles Laughton, which starred Robert Mitchum, Shelly Winters, Lillian Gish, and Billy Chapin.  During Kathy’s teenage years, she added radio and stage to her burgeoning film and television career.

Ms Garver was a freshman majoring in speech at UCLA when she was tested for a television series entitled Family Affair (1966-1971).  Kathy, deemed just perfect to star as “Cissy” with Brian Keith as “Uncle Bill” and Sebastian Cabot as “Mr. French,” headlined for five years in one of the warmest and most enduring series of the 1960’s and 1970’s.  With “Buffy” and “Jody,” the show continues to be popular today pleasing old and new audiences world-wide as a true classic.

Today, Kathy is an accomplished and versatile actress, appearing in such films as Old Man Jackson, The Broken Road and The Princess Diaries, Mom, Murder and Me along with made-for-television movies such as F.B.I. Murders and Hercules Saves Christmas with guest-star roles on many TV series.  She is a sought-after celebrity on game shows, winning top money for charities such as Street Smarts and other reality programs.

Kathy is very much in demand for her numerous vocal characterizations.  She is a standout in the very competitive field of voice-overs for cartoons, commercials, toys and audio books.  She voiced “Pepper,” an automotive whiz in the Chuck Norris Karate Kommandos TV series and “Firestar,” a mutant super hero in the Spiderman and His Amazing Friends TV series.  Kathy produced, narrated and wrote lyrics and original music for eight audio Beatrix Potter tales and eight Mother Goose-based audiotapes for Smarty Pants, Inc.  Kathy’s Beatrix Potter tapes have sold over two million copies and have won numerous awards.  She has recorded books for Brilliance Audio, Audible, and Listen and Live Audio.  Her voice has been heard in Back Draft, Apollo 13 (which achieved the Academy Award for sound), Ransom, and Jingle all the Way.  Kathy has recorded more than 80 audio books garnering four prestigious Audie awards in the process.

Kathy is producing and starring in A Family Affair to Remember documentary to commemorate the 55th anniversary of Family Affair. She also hosted StarWatch a talk show which honors the recipients of the Golden Palm Star for the Walk of Stars in Palm Springs for which Ms. Garver is also so honored. Kathy recently starred with former child star, Christopher Knight (The Brady Bunch) Fred Grandy (The Love Boat) and Caryn Richman (Gidget) in a new play Dinner at Five written and directed by Lloyd Schwartz (Gilligan’s Island producer/writer and Brady Bunch producer/ writer) destined to be a true classic.

Kathy finished two pilots in 2021 TvDinners for which she is host and Aunt Cissy a spinoff of Family Affair in which she is the titular star. In November Kathy put the finishing touches in Old Man Jackson in which she stars as Mrs. Jackson.

For all her accomplishments, including her new Cissy crunch candy bars and Cissy candles, Kathy’s sails will be billowing in some very favorable waters for quite some time.

Watch Kathy Garver on “If These Walls Could Talk” with hosts Wendy Stuart and Tym Moss on YouTube here:

Subscribe and listen to “If These Walls Could Talk” on Apple Podcasts/iTunes here: