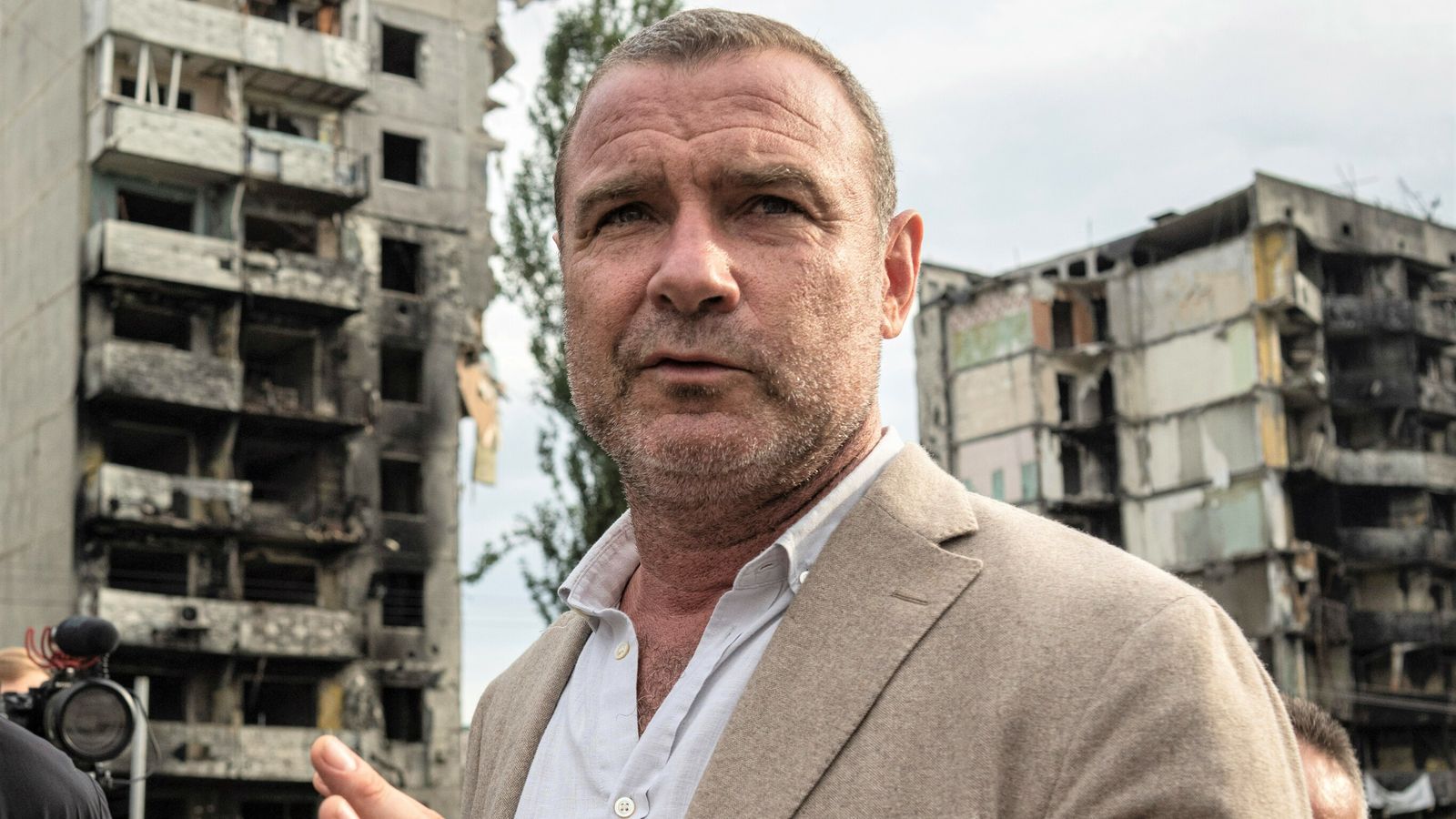 As Russian missile strikes against Ukraine’s power and water supplies ramped up in recent weeks, images of surgeons carrying out life-saving work by torchlight started to make headlines around the world.

Liev Schreiber, who you might know as Hollywood “fixer” Ray Donovan in the hit TV series, or for his roles in films varying from blockbuster X-Men Origins: Wolverine to the Oscar-winning Spotlight, had already been fundraising to support a range of organisations in Ukraine since the start of the war. But the stories emerging about hospitals being plunged into darkness made him want to do more.

The American actor, whose grandfather was a Polish-Ukrainian immigrant, has launched an appeal to raise $1m (about £833,000) to buy generators to help medics in need; to give them the basic conditions of light and warmth in which to continue their work should power outages continue.

Speaking to Sky News in a UK exclusive interview, Schreiber said he felt he had no choice but to help.

“Russia‘s strategy of responding to military advances by attacking civilian infrastructure has gotten pretty drastic,” he said. “They’ve done a tremendous amount of damage to the energy infrastructure in Ukraine. What we are doing, is just to [help] hospitals and doctors… for them to be able to continue to do the work that they need to do, which is so essential, to keep people alive.

“There’s a couple of hospitals that have had these extraordinary examples of doctors completing open heart surgeries by candlelight and flashlight. These are incredibly capable medical professionals. What we’re trying to do is to raise money to buy generators, to keep all of these hospitals lit so that the medics and the surgeons can do their work.”

Schreiber, a five-time Golden Globe and three-time Emmy nominee, is an ambassador for Volodymyr Zelenskyy‘s United24, set up by the president to raise funds for the country following the outbreak of the war.

He has now been joined by five fellow United24 ambassadors – footballer Andriy Shevchenko, heavyweight boxer Oleksandr Usyk, astronaut Scott Kelly, tennis player Elina Svitolina and historian Timothy Snyder – who are all supporting the generator fundraising campaign. Generators start at about $8,000. In just over a week, they have raised $220,000 (about £179,000).

Russia has reportedly been carrying out attacks on Ukraine’s electricity transmission and heating infrastructure since October, in what Kyiv and its allies say is a deliberate campaign to harm civilians. The Kremlin has rejected accusations that it targets civilian facilities.

Saving lives in the dark

This photograph was shared by cancer surgeon Oleh Duda, who was in the middle of a complicated surgery at a hospital in the city of Lviv when explosions were heard nearby. Moments later, the lights went out, and he had no choice but to keep working with only a headlamp for light before a generator brought the power back after three minutes. “These fateful minutes could have cost the patient his life,” the surgeon said in an interview.

The operation on the patient’s major artery took place on 15 November, when the city in western Ukraine suffered blackouts as Russia unleashed yet another missile strike on the power grid, damaging nearly 50% of the country’s energy facilities.

In Kyiv, the city’s Heart Institute posted a video of similar scenes earlier in November, of surgeons operating on a child’s heart with the only light coming from headlamps and a battery-powered flashlight.

“The medical infrastructure… has just been decimated in Ukraine,” Schreiber said. “Just to keep those doctors working at saving lives is so crucial right now.”

The actor has visited Ukraine three times so far year and his Instagram page is almost solely dedicated to calls for support, as well as clips of the “heroes” he has met there and the work he has carried out himself in and around the country to raise funds and deliver aid.

As well as partnering with United24, he is also the co-founder of BlueCheck, a crisis response organisation set up just weeks after the war broke out with the aim of fast-tracking urgent financial support to Ukrainian non-governmental organisations (NGOs) – helping to fund everything from psychological support programmes to the evacuation of orphans.

‘Did I have that level of courage? I felt the answer was no. So I had to do the best I could’

While he is connected through his Ukrainian heritage, Schreiber says it is something bigger that has compelled him to offer his support. “As I sat on my couch with my children watching this war develop, and watching these normal Ukrainian men say goodbye to their wives and children, knowing that they may never see them again as they were loaded on to buses to fight in a war in which they were wildly outmanned and outgunned…

“The idea that it was an existential crisis for them, that without these men going to war, Ukraine would cease to exist. They would lose their ability to vote for their own leaders, to have their own homes, to speak their own language, to raise their children the way they wanted to, to love whom they wanted to love… Anything, everything would be gone.

“That pure idea of democracy for me feels like it’s being challenged all around the world right now. And I felt like when I saw that, particularly in front of my own children, questions were raised for me: Could I do that? Was I Ukrainian? Did I have that level of courage? And I felt like the answer was no. So I had to do the best that I could do, being as Ukrainian as I was – which I’m not, I’m American – I felt like I owe a debt to my grandparents and my ancestors who fought that particular fight over 80 years ago, and it’s now being fought again.

“As we see disinformation and misinformation popping up all over the world, it feels like Ukraine is the sort of stark example where it’s incredibly clear what’s happening. Maybe not to folks who are limited to Kremlin media, but for the rest of us, it’s very clear how fragile our democracy is and that we need to protect it and that we need to cherish the freedoms and liberties that we have and that were earned by our ancestors.”

Schreiber, who is a parent to two teenagers with his former partner, actress Naomi Watts, said as a father he could not sit by and do nothing.

“The life that [my children] have, the luxuries that are afforded them because of the battles my grandparents fought and the opportunities that I’ve been allowed, are not just granted,” he said.

Horrified by the images and news reports coming out of Ukraine at the start of Russia’s war, the world was quick to respond with donations of money, essentials and support. But nine months on, the initial groundswell of support has inevitably dipped.

Read more: Eyewitness – what the strikes on energy mean for Ukraine’s winter

Schreiber said the Ukrainians he has spoken to are in “remarkably good spirits… just incredibly resilient people and they’re convinced that it’s just a matter of time before this is over and they’re victorious”.

But he still hopes people will continue to show support for the country in any way possible.

“We are all brothers and sisters and we need to think like that. And we need, especially at this time of year, to be aware of those in need. And these Ukrainian people are deeply in need right now.”

Liev Schreiber is fundraising for United24