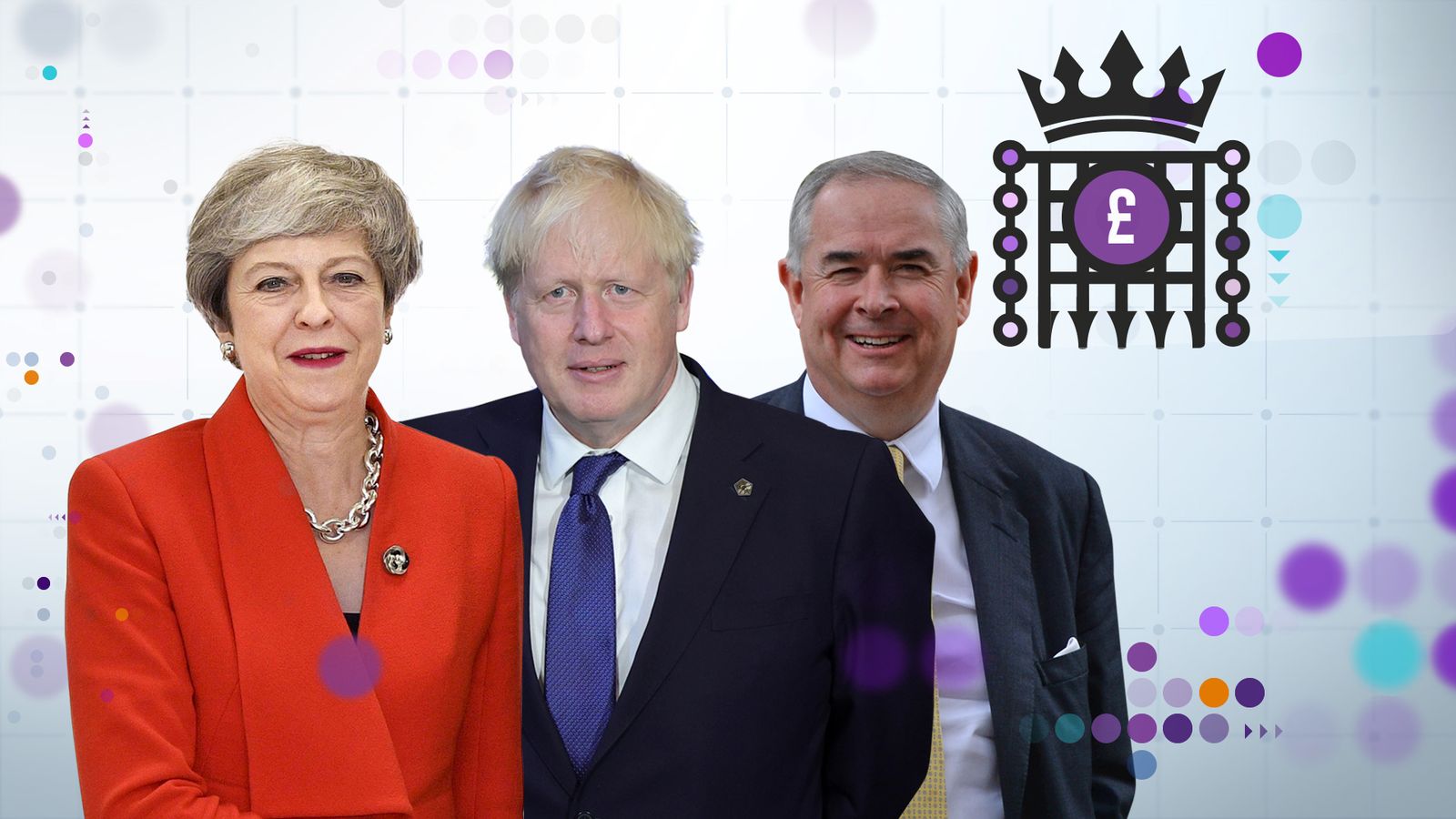 MPs have earned £17.1m on top of their salaries in this parliament, with around two-thirds of the money going to just 20 MPs.

As part of Westminster Accounts, a joint project between Sky News and Tortoise Media to shine a light on how money works in politics, we found the majority of the extra earnings went to Tory politicians – a total of £15.2m – while Labour MPs earned an additional £1.2m.

Read more:
Search for your MP using the Westminster Accounts tool
Transparency in politics often feels like it falls short – we want to shine a light on that
Westminster Accounts: Following the money
How to explore the database for yourself

Former prime minister Theresa May received the most on the list, earning £2,550,876 since the session began in December 2019.

The debate over second jobs dominated 2021 after former Tory MP Owen Paterson became embroiled in a lobbying scandal that eventually led to his resignation.

Other high-profile cases of MPs staying within the rules but earning thousands for outside work emerged, and demands for reform began to ring from all corners of the Commons.

Some changes are due to come into effect later this year, with MPs to be banned from taking on work as political or parliamentary consultants from March.

One source involved in drafting the new rules suggested this could impact the second jobs of around 30 MPs.

But they will not prevent others from earning significant amounts for speeches, TV appearances and legal work.

As mentioned, Mrs May has accrued the most in the past three years with a lengthy list of speaking engagements.

Her single biggest pay cheque came from Cambridge Speaker Series, who gave her £408,200 for six talks in California, as well as flights and accommodation for her and a member of staff.

How you can explore the Westminster Accounts

Perhaps most notable, however, is the money she received from the World Travel and Tourism Council for a speech she gave in November.

Her entry in the register of members’ interests makes no mention of the fact this £107,600 speech was delivered in Saudi Arabia – a country she blocked ministers and officials from visiting for a period while she was prime minister following the murder of journalist Jamal Khashoggi.

Mrs May has said the money she earns goes into a company called the Office of Theresa May Limited, from which she pays herself a salary of £85,000 a year. The rest of the cash, she says, goes to support her charitable work, though it is not known how much, and to pay for other activities as a former prime minister.

MPs are not required to make public their charitable donations, but Mrs May does carry out extensive charitable work – including for diabetes groups.

Despite repeated requests for comment about her earnings, no response has been received from Mrs May.

The next highest paid MP for work outside of parliament was Sir Geoffrey Cox, who totted up £2,191,387 from nine different law firms and a local Conservative association.

There was controversy last year when the former attorney general was found to have earned over £800,000 from the law firm Withers for his work on an inquiry into corruption in the British Virgin Islands.

His earnings from Withers have now risen to over £1.8m in the past three years.

In a statement, Sir Geoffrey said: “A barrister retained to advise in a case is no more to be personally identified with the purposes and views of his client than a plumber with the views of his customer or a doctor with those of his patient.

“Therefore, there is no conflict of interest between my work as a barrister and my role as a member of parliament. On the other hand, I frequently put my experience and understanding of the law at the service of my constituents in helping them to resolve their individual problems in my regular advice surgeries.”

The third spot in the list of parliament’s biggest earners is taken by another former prime minister, Boris Johnson.

The Uxbridge MP has rocketed up the earnings rankings, declaring more than a million pounds in earnings since he stepped down from office last September.

Almost all of his declared earnings since the last election came from just four speeches in October and November last, one of which in New York was paid at a rate of around £32,500 per hour.

The fourth spot went to another Tory MP, Fiona Bruce, who earned £711,749 from her own law firm on top of her salary.

In a statement to Sky News, Ms Bruce said: “Much of the sum declared is in fact tax paid directly to HMRC on my behalf which, to be scrupulously correct, I have declared though not personally received.”

She added: “Examination of my entries shows the limited hours I spend in the law firm; this limited time does not detract from my commitment to my constituents.”

And sixth place is Foreign Office minister Andrew Mitchell with £464,232 – over £100,000 of which was paid from advising investment bank SouthBridge on “African matters”. Mr Mitchell’s earnings were accrued while he was on the backbenches. He resigned from all his outside interests when he returned to government in October.

Other notable names in the list include former chancellor Sajid Javid, who has earned £361,566 from advising banks on the global economy and giving speeches.

Conservative MP Sir Bill Wiggin has made over £250,000 as an asset manager – running four funds, all based in the tax havens of the Caymans and the island of Bermuda, while ex-transport secretary Chris Grayling, known for granting a £14m ferry contract to a company with no ships, is now making £100,000 a year advising a ports and shipping business.

Only two Labour MPs made it into the top 20 earners, one of which is David Lammy, who has declared income from more than 40 different sources – the most of any MP on our list.

The shadow foreign secretary has listed at least 30 speaking and training engagements since December 2019, worth around £100,000, as well as more than £87,000 for a radio programme on LBC.

Sky News approached both Mr Lammy and the Labour Party to ask whether his work would qualify as an “exemption” from Sir Keir Starmer’s planned ban on second jobs, but no response was received.

However, Mr Lammy has in the past made an impassioned defence of his work on his radio show, saying: “Why am I here? Why am I pleased to be here? One because I am the only black presenter on LBC. It’s important for my constituents – I love the fact they approach me and can hear me putting views that they agree with out there into the public.”

He earns £5,000 a month as a political consultant for Herbert Smith Freehills and £37,984 as an asset manager for solar projects.

Commenting on the Westminster Accounts findings on MPs’ earnings, Hannah White, director of the Institute for Government, said the party affiliation of those receiving the most outside income showed why reform has been slow.

She told Sky News: “When you look at the data, it is very clear that there is a party pattern to which MPs are getting outside earnings.”

“I think that points to one reason why there hasn’t been a big incentive to sort this out in this parliament.

“[It explains] why it has been the case that although parliament decided that it wanted to put some restrictions on outside earnings, really the changes that have been made are pretty minimal, and there’s no real incentive on the ruling Conservative Party to push their MPs to change something like that”.